Antihero volume 2 complete. Thanks for all the hard work.

This is the writer Misora Riku.

Continuing after volume 1, this volume 2 is also crammed with the strength that Misora thought up as much as possible.

There was no dividing of battle potential or anything.

Well, at first I planned to divide it though.

While writing, I got into the mood like "No, if it’s Homura-san then just this far is still in his range is it not?" And so I did it like this with all that I have.

I thank the people that is kind to the earth and to Iod-sama. 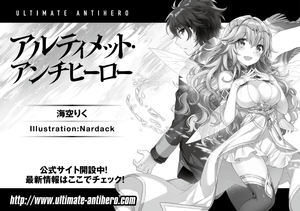 Now then, this time I was able to get out two evil gods.

One is <The Shining Pursuer> Iod that I just said. Just from its nickname is already just too cool. It’s just too cool, but even reading the material I cannot imagine what kind of appearance it has at all (lol), that was why I made it to have a giant compound eye and having a structure in the middle of mineral and biological composition, I left in the common trait that exists in any literature about it to my knowledge, and the appearance is depicted by the heightened image in Misora’s imagination. To the people that say ‘Something like this is not Iod!’, I’m sorry.

Then regarding Y’golonac, the information regarding its appearance is relatively considerable, especially in comparison to Iod, so perhaps I didn’t make mistakes about it that much, hopefully. Y’go-sama is one of Misora’s favorite evil gods. It feels like THE evil god. It’s a lovely kind god that cuddled close to the tiny humans (cold eyes).

As for the last, the editor Shouji-san who supported this work a lot by the solid response that he always gives. Nardack-san who draw explosive illustrations this time too where the eyes feels like pulsing with aura. And then all the readers who purchased this second volume.

Really, thank you very much.

Let’s meet again in the afterword of the next publication.