Three days after the attack of the <Holy Path Church>.

Other than Shiori, all the members of the 101st platoon were on the ground at Hachijo Island.

Of course, there was only one reason for them to visit this place.

It was in order to ascertain the settlement of the fairies.

Passing through the gate that Elfiena opened, fairies appeared out from it one after another like a swarm of butterflies and raised a joyful cheer towards the sunflower field that was spreading out before their eyes.

This island was once a tourist spot where people could enjoy various marine spots or diving or swimming in the sea, but the civilization was ruined at the <Walpurgis Night> and it was completely abandoned since then, the result was that it was now turned into an uninhabited island that was a haven of nature.

Greenery dazzlingly grew in rampantly swallowing the ruins of the town. Flowers of hibiscus and bougainvillea were in full bloom everywhere. There was no place where they, the [Fairy race], could live that was better than this.

“The light of the sun… feels good.”

The fairies that had the form of small girls that could be put on top of a human palm asked Elfiena while flying around her. Elfiena strongly nodded towards those questions.

“But of course. This is a land that <Evil God User>-sama prepared for our sake. Let’s use it with gratitude.”

Yelling joyfully, the fairies flew away while flapping their small wings noisily.

Standing beside Elfiena who was seeing them off, Sumika made a question.

“Is the migration of all the [Fairy race] over with this?”

“Yes. …The one who saved them, are all the people that are here.”

“Everyone looks really happy aren’t they?”

“…Because in the demon world they cannot even go outside anymore. They spent day and night shutting themselves inside a tree or soil. But for us fairies, sun and moon light are the source of our vitality, so their condition worsened from being unable to bath in light, then in the worst situation they would die.”

“It’s like a human that dies from starvation huh.”

“Yes. …It’s a really painful way to die. That’s why many fairies cannot endure it and went outside, but then they were discovered by other demons and the fact that fairies lived in that area would be exposed, and the settlements in that place would be all… that was how it was. That was why they were given detailed instruction to absolutely not come outside without permission. They have been enduring all this time, that’s why they are that happy. Everything is thanks to all of you.”

“There is no need to say any thanks. …Besides Elfiena-san had also saved the life of my friend.”

The friend Sumika mentioned could only be one person.

It was about the sister of the <Holy Path Church>, Lily.

Well, she was a former sister now that she had been prosecuted by Alfaro as a renegade.

Thanks to Elfiena’s swift treatment her life was barely saved, and then she was sent to hospital after that.

Since then Elfiena was not in a position where she could visit so she didn’t know anything, but

“Is that person fine right now?”

“Yes. All thanks to you. …Her parents died on the night of <Walpurgis> and since then she made the church as her support, so because she was betrayed by that church she received a really great shock, but I will support her in place of the church as her friend.”

While answering Elfiena’s question, Sumika added one last thing with a shy expression.

“She asked me to tell you ‘Thank you for saving me’. Though her face was a little complicated when saying that.”

A warm feeling spread inside Elfiena’s chest hearing that.

And then inside her, that feeling changed into a hope that surely someday they could understand each other with mankind.

If they didn’t give up, surely someday―

“Aa―! Over there, over there! It’s surely this person!”

Suddenly, a commotion happened, occurring out of nowhere at the side and Homura’s scream could be heard.

When Elfiena turned her eyes there wondering what happened, there, nearly a hundred of fairy children were literally crowding Homura.

Their eyes were shining with curiosity while flying around Homura.

“Ha!? I ain’t giving anything like that! Rather, don’t buzz around! Don’t pull the hair!”

“Stop the bullshit! If this many of you do that I’ll go bald-!”

“Then name me please.”

Elfiena’s face paled in a flash looking at that sight.

Homura was the benefactor that saved the [Fairy race]. It was only the natural reaction as the leader of the race.

“Yo, you all! What are you doing there!? You mustn’t be impolite!”

The fairies scattered everywhere exactly like baby spiders, they flapped their wings that were shining like a rainbow from the sunlight and escaped to the sky.

After looking up at the girls who were like that reproachfully, Elfiena lowered her head in their place to Homura.

“Forgive them Homura-san. Because a lot of the survivors are young fairies…”

But even while complaining like that, Homura was staring at the direction where the children were flying away.

“But well, it’ll surely be hard for you all after this. It’s better to be energetic like that I guess.”

He whispered without minding at all the impoliteness of the fairies.

―Actually, currently, the [Fairy race] was in an extremely awkward position.

Although they had obtained a powerful backing that was Homura, the <United World Government>… its core the <Five Great Leaders> didn’t contact this side at all since the case with Alfaro.

They also kept closing the channel towards Kinugasa’s side too even though they were fellow <United World Government Member Nations>.

In other words this migration was not amicably established.

…Well, though because the reason of the inamicable establishment was solely because the <United World Government> breaking the promise from the negotiation one-sidedly, they couldn’t even do anything to Elfiena and the fairies at all.

“If anything happens then just consult me without any reservation. I told you that I’ll protect you all. I’ll protect the promise.”

Naturally Homura also knew about Elfiena and the other’s innocence, so he gave them that strong promise.

Elfiena bowed her head deeply from those words and expressed her thanks.

“Really thank you for everything. Homura-san is the hero of the [Fairy race]. If Homura-san was not there… right now I…”

She would surely be killed in that place.

And then if Elfiena died, naturally the [Fairy race] would be left behind in the demon world that had turned into a hell, there was no doubt that they would be exterminated.

The thanks was for that reason, but

Homura lightly returned a flick to her forehead from hearing those words of thanks.

And then he frankly told Elfiena who blinked her eyes with a face that seemed to say ‘really, what a hopeless fellow’.

“What are you gonna do if you keep thinking stupid things like if I’m not there or anything. Doing things like that is just a waste of time. I am right here. And then I’ll protect y’all. This is absolute. Those what-ifs ain’t gonna happen.”

He looked straight at Elfiena and gave her his words.

Looking at that endlessly kind eyes and hearing those powerful words, Elfiena thought.

“You are right. Exactly as you said…”

Surely Homura would protect them just like he said.

Correct. No matter even if doing such thing would isolate him far away from among [people].

He would protect everything, human and fairy.

Because he had the power to accomplish that.

Because that was exactly the way of life of him, the <Ultimate One>.

Elfiena had one thing that she was uneasy about.

That was, the fear that she could see from Homura crushing himself.

Originally, the powerful wouldn’t be able to understand the heart of the weak.

That Homura could understand the fearful heart of Elfiena, was it not because Homura also possessed the same weak heart?

If that was the case…

Could such soft heart endure his lonely way of life?

“Hm? What’s with you, making a difficult face like that.”

Was it hard for him?

Elfiena swallowed back the words that she almost asked.

Because if she asked, he would surely hide everything behind a strong smile.

And then at the same time, where silence was born between the two,

From inside the bushes, Chikori leaped out together with adult fairies.

She was carrying a large pig above her head. 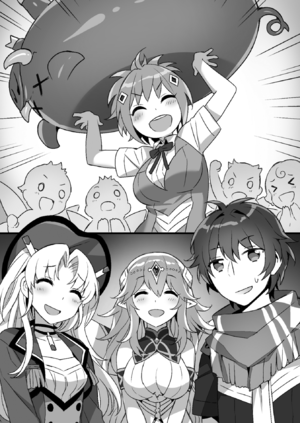 “It seems that when a pig turn wilds it will return back to its ancestry and grow fangs you know. I think this pig is originally the livestock of the farm here.”

“Let’s make a barbeque with everyone quickly. My stomach is hungry.”

After saying that, Chikori carried away the pig that had the mass of around two adult males.

Sumika made a wry smile seeing that figure of Chikori.

“Yeah, that girl right now don’t have the smell of civilization even more than me when I lived in a slum.”

Homura was also of the same opinion, however the timing was just right now when it had become noon.

It was lunch time.

The weather was clear.

Surely eating barbeque under this blue sky would be really tasty.

Imagining that, their wry smile soon turned into a smile.

“We are going you two. If we leave everything to Chikori, she is gonna eat everything.”

“That’s right. Certainly that will be troubling.”

While exchanging words, all of them followed after Chikori.

And then, surrounded by the new residents of the earth, they passed the time with a fun lunch.

At the same time, the main headquarter of the Holy Path Church―<Vatican life sphere>, there, the pope, Innocentius, was being told of the failure of Alfaro in his duty by the president of America, Joseph.

“Is that so? So Alfaro failed.”

It was a dim room. Inside the silence there was only the systematic sound of electro-cardiogram resounding.

The heavy voice of Innocentius that was receiving the phone call reverberated.

But, there was no tone of particular dejection in his voice.

As if he didn’t expect anything from it since the beginning.

{No, his consciousness hasn’t returned, but for the moment he lives. Right now he is receiving treatment in a hospital that is financed by the <Holy Path Church> inside the <Tokyo life sphere>. It seems that currently there is no prospect of him regaining consciousness, but…}

“I don’t mind if the recovery of his body is finished already. Transfer him right now to the government hospital of <Detroit life sphere>. …With that all the necessary factors for the <One Year Plan> are set in place.”

{I understand. Well then, take care―}

Cutting the transmission with that exchange, Innocentius stored the mobile phone back into his sleeve.

And then, while making an evil smile on his wrinkled face,

“[Fairy race] huh. They really came in at a convenient time.”

Inside the darkness, he looked up at that which was faintly emitting light.

It was a cylinder shaped tank emitting faint green light like a firefly.

Inside it… a naked young boy possessing a pair of wings with his eyes closed floated there.

“Miraculously, just at the same time when the last adjustment was finished, all the conditions were put in good order. ―Undoubtedly all of this is also the will of our great lord.”

And then as if to respond to that whisper, the boy floating inside the water tank opened his eyelids.

Staring at that, Innocentius blessed his awakening with a whispering voice.