This is Tsukasa. It'll be April by the time this Volume 8 of Unlimited Fafnir, Amethyst Rebirth, is released, but right now, when I'm writing this afterword with my feet feeling cold, I really hope the weather will get warmer sooner.

However, there will be pollen in the air during spring, right...? For someone like me who's susceptible to both colds and hay fever, spring is such a happy yet suffering season.

Then in April, the anime's broadcast would have ended. How did you feel about the world of Fafnir depicted by the anime? I am honestly overjoyed just simply from seeing Iris, Mitsuki and the others in motion. I also found it very enjoyable to learn about the anime production process.

Due to the limited edition of this Volume 8, I had a chance to write a drama CD script, giving me a very valuable experience. Because this volume was packed with tense plot, I tried to write something fun and relaxing as much as possible, to craft a story that people could listen to again and again. Anime is about having voice actors perform a script written by the screenplay writer, but for a drama CD, the story I wrote would become the script directly, so I felt quite embarrassed during the recording process. My heart was pounding uncontrollably the whole time.

Even the same words would bring about different feelings depending on different acting. I was truly surprised to learn that so much information was packed into every syllable. And in anime, the addition of images is a major factor, thereby vastly increasing character information of Iris and the others, massively adding to their sense of presence.

Then during the development of these media franchises, the greatest assets I gained was the chance to interact and work with so many different people.

If you stick to writing novels, you basically interact with just your editor alone, thus only getting a blurry understanding of the broader industry. But this time, I was lucky enough to be invited to many different scenes, allowing me to witness so many things with my own eyes. I will continue to work hard so that I can continue to interact with the world like this!

—Oh, it feels like I'm writing an impressions essay. It's time for me to talk about the story in the main series but there might not be enough space left.

This Volume 8 is a major turning point where I wrote many scenes and situations that I've been wanting to do since a long time ago.

Next, many mysteries will be unraveled and the story will develop towards an even greater climax, so please look forward to Volume 9.

Well then, time for acknowledgements.

Korie Riko-sensei, thank you so much again for your lovely illustrations this time! Jeanne's bath scene really made me blush with excitement. You also helped the anime broadcast with your promotional illustrations, I am so happy. First credit belongs to Korie Riko-sensei for making Iris and the others into attractive characters.

Editor in charge, Jouji-sama. Thank you for doing so much promotion on my behalf for the anime. Thanks to you, I was able to maintain my pace and finish this Volume 8. Looking forward to your continued care!

Then my thanks goes to all staff who took part in producing the novel, the manga and the anime.

Though the anime has ended, this novel and its manga adaptation will still continue! The manga illustrates the feelings of Yuu and the others in great detail, making you feel like you're in the thick of things. Even after watching the anime, the manga can still help you to enjoy the story even more, so please have a read!

Finally a word to all readers—Thank you for reading and supporting this work.

Well then, see you next time. 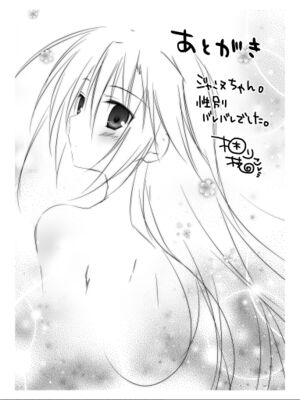 Jeanne-chan, your gender is very obvious.