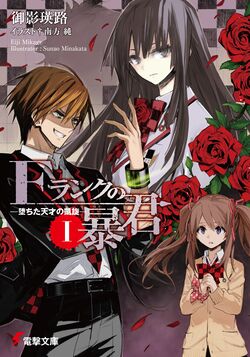 F-Rank no Boukun (Fランクの暴君, The F-Ranked Tyrant) is a light novel series written by Eiji Mikage (御影瑛路) and illustrated by Sunao Minakata (南方純). The series is currently on hiatus with 2 volumes published. The most recent volume was released on October 10, 2013. Mikage is also known for series such as Utsuro no Hako to Zero no Maria and the Kamisu Reina Series.

Not only do students enrolled here have the highest grades, they also stand at the pinnacle of the nationwide club rankings. Nanohoshi Private Academy bears resemblance to a shining star gleaming in the night sky, yet its essence consists of a strict ranking structure, in addition to a system that controls the students by quantifying everything, including their appearances. It is also known as the "Survival of the Fittest Academy".

It is controlled by the absolute strongest: Erika Kagurazaka, spearheading the "Urban Lion" faction.

Defeat her, stand atop the "summit", and reign as a "tyrant"──. Harboring this perilous ambition, the "Fallen Genius" Kanna Fujishiro begins his story in an F-Rank classroom...

This story of the low conquering the high, where intellect and intellect collide, begins!

F-Rank no Boukun by Eiji Mikage[edit]

PDFs AND EPUBs: Get them at the translator's site here.