Difference between revisions of "Kenshin no Keishousha" 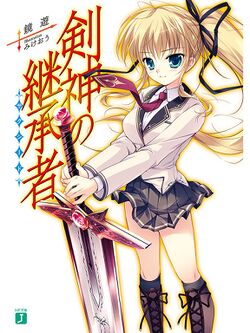 Kenshin no Keishousha (剣神の継承者, Divine Blade's Successor) is a light novel series written by Kagami Yuu and illustrated by Mikeō.
Published by MF Bunko J, the series currently has 5 volumes.

Tokyo Swordia, formerly known as Tokyo Metropolitan, has been ruled by the "Swordies" since the Third World War 70 years ago. These Swordies, natural-born swordswomen with an attraction to blades, more or less rule the country, and are considered upper-class members of society. In order to raise his own social status, Kurou, a human, begins attending an academy of swordsmanship, surrounding himself with Swordies on a daily basis. How will he fare in combat against those born to fight? (Synopsis taken from the manga)

If you liked this series, let us know on the forums!

Before you add your name here, read http://www.baka-tsuki.org/project/index.php?title=Format_guideline, sub-article 5 under editors, and take approval from the project supervisor.