The pale blue sky stretched for miles, with not a single cloud to be seen.

It was already past mid-May, the sunlight being glaringly bright and warm winds blowing about.

A youth in a school uniform was looking up dreamily at the sky while he walked on.

The monotonous sky seemed to be the only one ignoring approaching summer’s presence, its appearance as normal as it always was.

Looking at the scenery in the sky, the youth— Kurou felt a sense of relief.

Recently, he had been observing weird phenomena in the sky. However, those phenomena would only last for the briefest of moments, and at this moment in time he hadn’t spotted anything out of the ordinary. Halcyon days were the best.

Kurou was currently in one corner of the academy he was attending as a student, a vibrantly viridian garden. There was a grove of trees in the deepest part of the garden, and that was the location of the small cottage in which he resided.

Although it looked shabby on the outside, the inside of the cottage was clean, and well furnished with electronic appliances and furniture. Most importantly though, since it was within school grounds commuting to school was a breeze.

Because of a certain incident that had occurred, Kurou had only been in the academy for two weeks when he was hospitalised. Today was the day he was discharged. He hadn’t lived in the cottage for very long, but he was already starting to get attached to the place.

Kurou suddenly came to a halt, placing his hand on the katana strapped to his waist. Moving his head slightly, he scanned his surroundings.

He had already passed the garden and was now entering into the grove. The trees weren’t particularly densely clumped together, but there were still numerous places for someone to hide themselves in.

For a brief second, he felt someone’s presence.

He didn’t think he was mistaken. Being hospitalised meant his body had deteriorated somewhat, but it couldn’t have dulled to the point where he would mistake something like a person’s presence.

Kurou took his hand off his katana.

This was the Sword Academy— a place for people who chased after all aspects of the sword. It wouldn’t be strange for someone to be radiating a dangerous presence.

Deciding the situation was fine after all, Kurou resumed walking.

Of course, his state of mind was prepared for anything to happen. The alert phase Kurou was in now could be said to be his default mode.

This time around, he felt it clearly. Or rather, he could hear it.

Swishing sounds could be heard, as if someone was slashing at the air with a sharp sword. A sound like that was something Kurou was extremely familiar with.

Proceeding forward slowly, just as he reached the front of his house— Kurou stopped dead in his tracks.

Where the grove opened up into a clearing, there was a girl who was putting her spirit into swinging her sword.

The sunlight streamed through her golden hair, which was tied in a sidetail, she was wearing a pale beige blazer, and the hem of her miniskirt was flapping about.

The blade of the sword she was wielding was broad and thick, and it was roughly as long as she was tall. Just one look at it and it was clear that this sword was a genuine broadsword-esque blade. To a normal person, there was no way a slender girl like her would be able to handle such a large object. Even a fifteen year old male like Kurou, who had an average constitution, would find lifting something like that up tough, to say nothing of swinging it about.

However, the blonde girl was handling it lightly—even wielding it single-handedly on occasion. Her practice swings were stirring up wind in the grove, causing the trees to sway and their trunks to bend. It was scenery that didn’t look rooted in reality at all.

She was an alien, a being from another world known as a Swordie. Swordies could crush rock with their bare hands, and sprint faster than the wind. From the moment they were born, Swordies possessed speed and power that were superior to normal humans.

Above all else though, Swordies were a race that was proficient with the sword from the time they were born into the world. She wasn’t just swinging her sword using brute force, but with a graceful swordsmanship that belied her age of fifteen. Her sword looked like it could easily cut through iron.

The blonde girl— Sefi stopped her swinging, staring blankly at Kurou in surprise.

“How long have you been standing there?”

“Just now. More importantly Sefi, what are you doing here?”

Sefi was also a student of the academy, but her residence was at the girls’ dormitory.

Sefi wasn’t being honest as she replied, sheathing her sword in its scabbard, which was propped up against one of the trees nearby. Sheathing a sword that big should have been troublesome, but she did it with an ease that suggested she was used to this motion.

“Speaking of which, you’re finally discharged. I was wondering how long you were going to spend being cooped up in there.”

“I’m a human, you know. I got a deep gouging wound on my shoulder, not to mentioned I was slashed in various other places. The doctor remarked that the fact that I could be discharged in two week was already a miracle of sorts.”

Kurou lightly patted his left shoulder. There was some stiffness left in it, but it had roughly healed from the incident two weeks ago.

“Humans are such inconvenient creatures. Well, in anycase… W-w-w-w-el-co…”

“Oh, it’s Kurou. I thought you’d only be back in the afternoon.”

A carefree voice spoke, drowning out what Sefi was trying to say.

He wasn’t sure when exactly she had arrived, but a girl with long black hair was now standing next to the both of them.

Sakurai Hinako. Kurou’s housemate, and due to certain circumstances he was also her bodyguard.

He was looking at something he had gotten used to seeing recently— actually, that wasn’t exactly right.

When he had been hospitalised, he hadn’t even seen something like this once before. 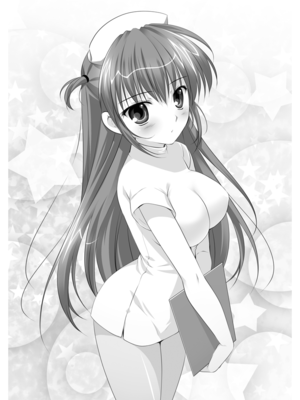 Currently Hinako was wearing a nurse uniform that was an eye-catching pink colour. Rather conscientiously, her nurse cap was pink as well.

Her skirt was dangerously short, till the point it barely concealed her panties.

Above all else though, because the uniform was tightly fitting to her body, Hinako’s ample bosom stood out, revealing just how well stacked she really was.

If nurses actually wore such titillating uniforms, male patients would deliberately injure themselves to receive attention.

“… Hinako, what happened to your maid uniform?”

Before Kurou had been hospitalised, Hinako had worn a maid outfit and pledged to serve him, and now Kurou wondered what had happened to that pledge.

“You hadn’t recovered yet Kuro, so I thought I’d wear this and nurse you back to full health.”

“That would have been some fine service, but… hang on. Where did you even get that nurse uniform in the first place?”

“It was inside the closet of clothes Manaka gave to me.”

“That woman… Such a needless souvenir to leave behind.”

Kurou felt a headache coming on.

She was currently missing, but even when she was gone she was still causing Kurou problems.

“I tried to stop her as well, but as you can see… In any case, why don’t we enter the house first?”

Kurou nodded at Sefi. There was no point in continuing to stand outside the house and talk. Lightly shaking his head, he started to walk. However, before he could even take a step, he finally noticed his house.

He let out a cry of surprise.

Disregarding what the inside looked like, the cottage Kurou lived in looked shabby on the outside, and was a nondescript building.

However, the building in front of Kurou was a brand new two storied house that looked like it had been prefabricated.

“What has my house become…”

Resting her giant sword on her shoulders, Sefi looked up at the small cottage— or rather, big house.

“While you were hospitalised, I had your house renovated. To be honest, it was just completed yesterday.”

“But why was it even renovated in the first place…?”

Because of his assignment as her bodyguard, Kurou and Hinako both lived in the small cottage together. Although it was a little cramped, it wasn’t as if the place was hindering them in any way.

“It’s not good for a boy and girl of the same age to be living together. I did it so as to maintain public morals and also so that Rou wouldn’t do anything perverted to Hina.”

Sefi glanced over at both Kurou and Hinako with a meaningful look in her eyes.

“So, I’ll be living here with the both of you from now on. I won’t accept any protests.”

Hinako seemed to have already been informed of this arrangement, as she was adjusting the position of her cap with a look on her face that suggested she was fine with anything.

“I requested the academy to build it. In the future, it will be used for the security guards in the garden to rest.”

Kurou nodded, chuckling wryly on the inside. It was hard for the academy to refuse any of Sefi’s requests. She was a Swordie with that much influence and power after all.

“So in other words… It’s an all I can sexually harass Sefi buffet from dawn to dusk?!”

Sefi yelled back at him in a rough tone.

It was a pity she had denied his request, but there was no denying that Sefi was now going to live with them.

Well, it wasn’t like he was going to raise any objections in the first place. Kurou’s hand lightly touched the katana that was by his side.

Other than wondering what would happen to this sword, it was far less troublesome to just accept whatever fate had in store for him.

This was a lesson he had learnt from the various incidents that had occurred before being hospitalised.