At the staff dormitory located within the ground of Nayuta Lab. In the lobby that was using plenty of marble material, three girls were walking. It was holiday, so they were dressed casually instead of their usual uniform.

Carrying a handbag filled with present, Hayuru let out a mutter that was mixed with a sigh.

「After everything, in the end it’s the commander who is the first……」

However Aine folded her arms. Far from lamenting, she even showed a fearless smile.

Yurishia pressed the elevator button while tilting her head.

「Because the commander is the big sister. In the first place she isn’t a wife. She’s a special case, special case!」

Hayuru felt like even more strength left her body.

「……Really, Aine-san just doesn’t know when to give up.」

The elevator door’s opened along with electronic sound. The three entered inside and then Aine pressed the button for the topmost floor.

「Naturally. After all I’m number one within Amaterasu. I’m the first wife!」

Yurishia slightly gave a hint of a sense of superiority. Aine glared toward her.

Yurishia caressed her abdomen from over her clothes where the proof that she belonged to Kizuna was engraved.

Her composed expression and her gesture of caressing her abdomen made Aine and Hayuru’s complexion changed.

「That’s not it. I’m simply not concerned anymore whether one is number one or two, legal wife or mistress. After all I and Kizuna are tied with even stronger bond♡」

When they got off the elevator, the room they were heading to was right there.

After pressing the interphone’s buzzer, the door was opened and a small girl peered out from inside.

Hida Setsuna looked up at the three shyly.

「Ah, so you are wearing that.」

「Yeah, it’s really comfortable and easy to wear. Thanks for this, Hayuru.」

Hayuru blushed and fidgeted. Yurishia and Aine were staring at her intently.

「Really Hayuru, you stole a march while keeping it a secret from us……」

「Good grief, when it come to this thieving cat, I can’t let my guard down at all.」

「I, it’s a misunderstanding! I only handed it early as congratulatory gift for the house moving.」

Kizuna smiled wryly at the three who were arguing at the entrance.

「Well, come inside for now. Let’s talk leisurely then.」

Urged by him, the three entered the room.

The living room inside was really spacious. It was a bright space with sunlight shining in from the window.

Reiri wearing an apron showed her face from the kitchen.

Aine and others unconsciously backed away.

「……I can’t recognize her as the commander.」

「Hey Aine. As expected isn’t she the last boss?」

「Ah! This is a present. From a new cake store at the shopping mall!」

Before Reiri’s anger exploded, Hayuru immediately presented the handbag. Then instead of Reiri it was Setsuna who raised her voice in surprise.

「Eh!? It’s from that shop where there is always a long queue and the stock is sold out in the blink of eye!?」

「Yes, that’s right. Furthermore we bought all the types.」

「Well, it doesn’t matter how long the queue is, we can shop there without waiting in line.」

「We heard that Setsuna-chan looked like you want to eat the sweets there so we bought it you know? Is it to your liking?」

Setsuna looked up to the three with sparkling eyes.

「Thank you very much! Onee-sama!」

And then she glared toward Reiri,

「What are you doing, Onee-chan! Please prepare the tea quickly. That’s impolite to the guests.」

Reiri replied ‘yes yes’ before glaring at Aine and others.

「……You girls, you’re planning to win over Setsuna huh.」

The three showed a mischievous smile and sat down on the sofa.

Setsuna shrewdly sat down beside Kizuna. Aine smiled at her with her best smile.

「Hey, Setsuna-chan. You know that we are doing a lot of missions together with your Onii-chan right?」

「Yes. All of you are Amaterasu members after all, so I think that must be the case.」

Hayuru also stared at Setsuna with a kind gaze.

「I think that your big brother coming back late from the academy or going out at night will happen occasionally……no, happen almost every day.」

Yurishia winked with an apologetic smile.

However Setsuna shook her head.

「No, I have realized before this that it’s an important duty to protect Ataraxia. Please take care of Onii-chan.」

She bowed with her small head.

The three looked at Kizuna’s face and grinned.

Reiri came at that timing bringing teas and cakes that were placed on a tray.

「Of course, it might be alright already for commander, but for us this is still only the beginning.」

「Or perhaps, commander is still……in rotation?」

「No, I can’t do it right now after all. Right now I’ll leave it to you girls. My return will still take a while.」

Reiri made a taken aback face and her cheeks turned red quickly.

Kizuna was listening to that conversation nervously. Beside him Setsuna was making a puzzled face.

「Everyone, what are you talking about?」

「No, nothing……ah! More importantly Aine. Were you able to talk properly with Grace?」

After that she looked at Hayuru and Yurishia and said.

「My bad, I joined up late that time.」

That time when the multinational army exploded the remodeled Tri-Head, Lemuria and Atlantis were extremely close.

It was so close the voices from both sides could reach.

Even when it was time to sortie, Kizuna considerately told her that it was fine to keep talking until the very end.

Hayuru also narrowed her eyes in remembrance of happy memory.

「How nice……I was also really happy being able to talk with Hyakurath-san.」

But, she was worried that Hyakurath sounded a bit dispirited.

『Hyakurath-san, is something the matter? You had just received promotion right?』

『……Himekawa-san too, how about you introduce yourself as sword saint too soon?』

Because there was that conversation, right after that she introduced herself like that spontaneously. When she recalled it, it was so embarrassing it felt like her face would burn even now. Hayuru blushed.

「N, no, that’s──that’s right, speaking of being beaten to the punch, there is also Gravel-san.」

Aine looked surprised in remembrance and her face became displeased.

「That’s right! Well putting aside Gravel, it’s Zel who is unforgivable! Good grief……the next time we met, I absolutely won’t let her get away.」

Gravel and Zelcyone kept it quiet so that Kizuna wouldn’t fuss about them but, after that Grace spilled it to Aine in the end.

There were two children that descended from Kizuna at Atlantis’s side. Furthermore one was a boy. Perhaps they would become an existence that brought about revolution to Atlantis.

By the way, the two of them were named Kizuna after their father.

「It’s puzzling that the two of them are Kizuna.」

Setsuna tilted her head in puzzlement with a fork in her mouth.

「No, nothing. It’s nothing important. Don’t mind it.」

「A, anyway! We also cannot lose. We have to do our best with ultimate hybrid from here on too. Especially Kizuna.」

Aine folded her arms and spoke haughtily for some reason.

He sent his gaze toward Hayuru and Yurishia to ask for help, but the two of them were also nodding intently in agreement.

Kizuna also brought the cake into his mouth. The taste was sweet and mellow. It was the taste of happiness.

Aine suddenly remembered something and spoke.

「That’s right! One day when we also got a child, let’s go to meet everyone in Atlantis.」

Both Hayuru and Yurishia didn’t retort ‘How?’ or the like.

「That sounds nice. I’m looking forward to it.」

「I can imagine it’ll become an amazing mama meet. What’ll we talk about there I wonder?」

In respond to Yurishia’s question, Aine stared at Kizuna with a mean smile.

「Of course, it will be complaints about the husband.」

And then the three laughed together.

Kizuna, Reiri, and Setsuna were also drawn in and smiled.

Having a trifling conversation like this and laughing together with the friends from another world.

Such day would surely come. 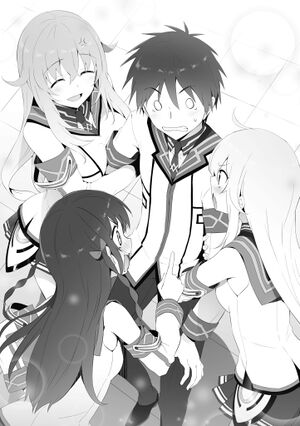