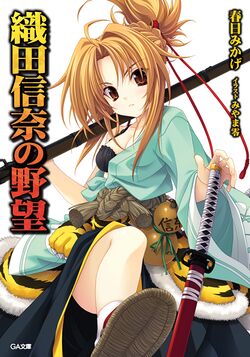 Oda Nobuna no Yabou (織田信奈の野望) is a light novel series written by Kasuga Mikage and illustrated by Miyama-Zero, published by GA Bunko. Currently, the series has 13 volumes and a spin off novel.

A one cour anime aired in Summer 2012, produced by Studio Gokumi and Madhouse, it covered the first four volumes.

The Oda Nobuna no Yabou series is also available in the following languages:

Sagara Yoshiharu finds himself back in time during the Sengoku era. During his first day, he was about to be killed in a battlefield. He is saved by a man named Toyotomi Hideyoshi. The famous Daimyou, General and Politician who unified Japan and ended the Sengoku era, dies while saving Sagara Yoshiharu. With history completely changed, Sagara Yoshiharu tries to make things right again but it seems that history is taking a different course than the one he learned in his time. Oda Nobunaga, the famed Daimyo is now a brilliant but beautiful young girl named Oda Nobuna. Sagara Yoshiharu decides to replace Toyotomi Hideyoshi by taking his place and serve under the command of Oda Nobuna under the given name "Monkey". Rewriting history as he goes along.

Feedback about this series in the forum

The 'Oda Nobuna no Yabou' series by Kasuga Mikage

Heaven and Earth and The Princess