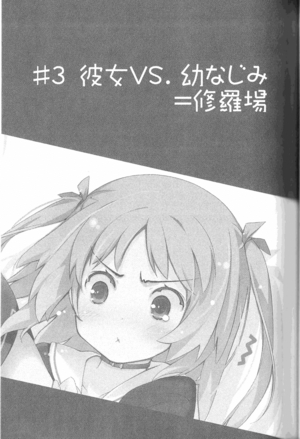 The news of Matsuzu Natsukawa had spread without much assistance throughout the entire school by the next day. Such fearful propagation power, or should I say infectivity. Whoever hooked up with whoever, whoever got dumped by whoever, these sorts of stories could be heard ten miles away as soon as it happened. Not because Natsukawa had been spreading the good word everywhere, but because the passion of romance believers went beyond the passion of Catholics of the medieval ages by far.

Speaking of which, perhaps Natsukawa did have a hand in this. After all, if rumors cannot spread effectively, she wouldn't have the need to start a pseudo-confession to protect her "barrier" to begin with.

Every recess or break we had, people from other classes rushed over to observe me. 'So it's that guy?', 'Seems very normal', 'One really can't figure out the taste of ojou-samas.' Just these unscrupulous comments, I already began to understand Natsukawa's feelings. This certainly was very hard to deal with.

Yamamoto of the soccer club requested to shake my hand for the second time this month.

"If you don't give Natsukawa happiness I will never forgive you, yo☆!"

Oh, Yamamoto-kun. You are too dazzling.

If I could, I'd love to offer you the right to bring forth Natsukawa's happiness. I really do.

—Speaking of which, hurry up and assist me! I beg of you!

That day, at the end of school.

"Humans should know when to give up, Eita-kun."

"Just like our classmate Yamada said, let's work together for my happiness."

Oh and also, it wasn't Yamada, but Yamamoto. Regardless this had nothing to do with the topic.

We chose not to take the main roads but a longer route with less people. Even though slightly longer, we had little choice. It was relatively better than to walk home under jealous surveys and irritating whispers.

Masuzu clapped her hands together.

"From now on, since we'll be spending a rather long period of time together after school every day, don't you think we should spend this period of time better?"

The journey Masuzu and I took is from the school all the way to the convenience store on Third Street. The distance was about 1.5 kilometers, around 20 minutes of walking distance.

"Arguing each day for these 20 minutes isn't exactly a good use of time. We should try and make it more meaningful, certainly by working together."

"And? What suggestions do you have?"

"Well that's of course... buying something to eat, going somewhere to play for a while."

"That seems rather interesting. But spending each day like this would seem a bit... More importantly: I don't want to reduce the time I spend studying, in addition to the burden of washing clothes and making dinner. Therefore I should waste as little time and money as possible."

"Then I guess we should just stick to chatting."

"Like the sweet lovey-dovey talks between boyfriends and girlfriends, eh?"

Goosebumps appeared on both Masuzu's arms and mine.

I spat on to the ground.

"Thinking carefully, there's no need to stick with those kind of lover's talk."

"True, after all it's all just play act."

"As long as it's something we can talk about. Such as let's say the TV shows we've seen yesterday, that's a common topic."

"Understood. Let's begin from there, then."

Ho. This person sure knows how to make a good discussion topic. Maguke [2] is my favorite TV show.

"Of course. Oh, that last scene was the most memorable! You know, the scene where his partner gets shot by the fugitive, then out of nowhere he pulls out a cigarette, then saying 'Bastard, didn't you know I was quitting'. That line was incredible! It really makes you look forward to the next episode! The kind of feel where he has gone through all sorts of pain in life. There are too little dramas like these nowadays! This is godlike! The best show ever!"

"That... I never planned to make such a deep conversation."

You made me waste my passionate emotions.

"What I originally planned was to make a point that topics with Eita-kun seem rather lacking and attempted to begin with a popular TV show."

"Well, looks like topics between us are very lacking indeed, I'm sorry!"

No matter what, I can never leave 'topic poverty' in her eyes.

"And what would Eita-kun's hobbies be?"

Suddenly asked directly, it did seem hard to answer.

My hobbies... What would they be? I guess it all leads to cooking?

"When listing please exclude peeking up skirts at staircases and stealing panties, these two—"

"Did I ever have those two hobbies?!"

"D-Don't tell me it is not a hobby but a way of living already?!"

"I'm really sorry. Looks like I injured Eita-kun's most pure impressions towards panties. How about as an apology I let you see my..."

Masuzu bit her lips as if regretful, then began pulling up her skirt.

A group of elementary school kids and chatting housewives gave me cold stares.

You crazy people, why am I the conspirator here?!

"Today's underwear is rather bold. Not only does it have flowery sides, at the very end of it, it is actually transparent... if I were to know I would be harassed like this, I should have worn underpants more suitable for a high school student."

"Stop talking as if I'm the bad guy!"

"For your information, it's black."

Her skirt was slowly being lifted up, revealing her long slender legs.

I couldn't help but form white foam in my mouth.

They were of someone who hasn't gone out much.

Smooth and sturdy, there was something that slightly triggered you, letting people unconsciously look forward to what comes next. Ahead of here, lied black—

Masuzu let go of her skirt making it flop.

All that could be seen were the clean linings, the skirt then gently fell downwards, once again covering her legs.

Masuzu stuck out her tongue.

"Even if you're my 'boyfriend', it's only been two days since we've started dating. Something like this hasn't been stipulated within our arrangement."

I knelt down on the pavement, helpless and weak.

I was fooled with...

The pure emotions of a high school student were toyed with...

"Get up, Eita-kun. Our happy times together have just begun."

Certainly, we have not even reached halfway of our journey.

And yet it already is a horrible nightmare.

"Stand up like a man, and let's head forth to our bright enjoyable conversation!"

I wiped my tears off.

Well, they say the more you feel like this, the more you should have an optimistic view towards a revolution.

"Then let us start another topic~"

"What do you think about it?"

"Hmph — Rather interesting, I guess?"

"You watched that kind of amazing show and yet that's all the comments you can give? What a boorish man."

"Argh, such a headache. No matter what we talk about we'll never be able to have a good conversation."

"And you are actually the cause—!"

"Ho-Holding hands and such, indecent! Too indecent!"

Chiwa pointed towards us, her face completely red.

Her backpack was rising and falling in sync to her deep breaths, I assume she just ran full speed from school to where we were.

But holding hands? No, we aren't.

Just as I was thinking like this, before I knew it, Masuzu hugged my left arm tightly. What on earth was she thinking?

This person seemed to be after us because of the rumors of Masuzu and me.

I wonder if this falls into the good category of the bad category.

I guess overall it's good?

Making a girlfriend is something that deserves to be congratulated?

But wait, her reaction is—

"Getting popular before I do, Ei-kun is acting too arrogant here—!" 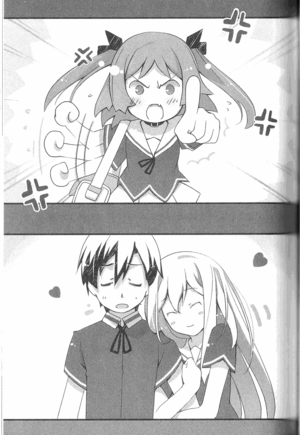 Why am I always the punching bag?

"Ohh Eita-kun, who is this little kid right there?"

Masuzu acted as if only noticing the presence of Chiwa a moment ago, asking with her head slightly tilted.

"OK, OK, OK. Which elementary school are you from again?"

"I'm not an elementary school student! Moreover, I'm wearing the same uniform as you do!"

"Then are you a member of the Anti-Eita Society?"

"Are there only two extremes in your head?!"

"Then who are you exactly?"

Chiwa for some reason announced confidently:

"Just because you're a childhood friend you believe you are entitled to do such kind of violent behavior?"

Masuzu narrowed her eyes, as if trying to pierce through Chiwa just by looking.

"Entering the space of a romantic date between a couple after school, don't you think that it deserves to be kicked to death by a horse?"

Oh Masuzu-san, is this called a date now? A fun date where I was scolded all the way as 'panty thief' or 'boring man' and whatnot...?

"...Ei-kun! Why didn't you tell me about having made a girlfriend?!"

Seeing the difficulty in her opponent she turned her anger towards me.

"Oh my, being together with Eita-kun requires the permission of Harusaki-san?"

"Damn right! I've spent so much time with Ei-kun, we grew up like brother and sister! Some random girl who's just been getting to know Ei-kun for two months, who do you think knows more about him?!"

"I know everything about Ei-kun! Just like how in grade 3 he put milk in the school lockers intentionally letting it go bad, like how he called our class teacher Yoshioka 'Mama', and also in that marathon after stepping on some poop he was called the 'Poopy Bulldozer', absolutely everything about him!"

"My, my, now I know more about such fascinating events."

Masuzu listened carefully with her eyes shining, even taking notes of Chiwa's blabbering.

I just... have a sudden urge to kill myself.

"Therefore, you must first go through me if you want to date Ei-kun!"

Masuzu held two corners of her skirt and did a little bow, saying elegantly:

"I apologize for not greeting beforehand. I, Natsukawa Masuzu am now dating Kidou Eita-sama. If you would be so kind as to bless us both, we are under your care."

"Eita-kun, let's continue our date, shall we?"

Chiwa pouted as if a kid losing her toy and glared at Masuzu with hatred.

"Is there something else you want?"

"A—bsolutely not! I don't want Ei-kun to be with someone like you!"

My right arm was being tugged over, with a seemingly high chance of being ripped off.

"Then I shall accept your challenge. I dare you to come put out the blazing love between us."

This is such a tragedy.

Neither Chiwa nor Masuzu gave away. The two of them pulled from my both sides, just like a tug-of-war.

"Look, Eita-kun is already crying out in pain. As a caring childhood friend, why don't you let go of him?"

"No, you should be concerned about your boyfriend and let go of him!"

Eventually, Masuzu could not defeat the kendo trained arms of Chiwa. Masuzu lost balance and pushed me over. Like so, I tripped over some obstacle on the pavement.

I went head first into a pile of garbage, while Chiwa and Masuzu, who had let go beforehand, were completely safe and sound.

That's too cunning. Tears and pain are always of the man.

"Huh—! So what if you're in love?! I'll find my own handsome boyfriend! I'll definitely become popular!"

Like a kid who had just lost a game and could only make verbal threats, Chiwa disappeared after saying this sentence.

Masuzu beamed her angel-like smile, watching me piled in garbage from above.

"Hohoho, Eita-kun is quite popular."

I don't want to care about any of you!

That night Chiwa didn't come for dinner. So much for making her favorite hamburgers.

I sent her a text and quickly received a reply with only one word.