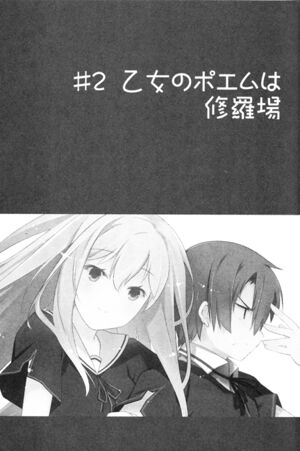 After a restless night, morning came.

Ever since I had received the love letter, I couldn’t study no matter how much I tried. With my mind unable to concentrate, I procrastinated late into the night and by the time I fell asleep it was already three o’clock in the morning.

As I rubbed my bleary sleepy eyes on the way to school, Chiwa, who was walking next to me, put on the appearance of a big sister and asked me worriedly: "Did you stay up all night studying? Or is there something on your mind? You can always talk to me about it."

By just looking at the way she acted, Chiwa couldn't possibly have anything to do with this.

She isn't the kind of person who can pretend and play dumb, I'm the one who knows that best.

But if that was the case, I couldn't think of anyone else who would want to 'bind ourselves together like in the distant past.'

Although this wasn’t anything to brag about, in Elementary and Middle School, I had almost no female friends. If I traced my memory back to kindergarten, there was actually one; but her name and appearance had already faded from my memory, thus I couldn’t confirm it.

With my head in a daze, the day went by. After school——

"Somehow, you don't seem to have any energy today, Eita-kun."

The moment I entered the clubroom, I saw Masuzu with her eyebrows furrowed.

"That’s not good. Even though it’s right before exams, you shouldn’t stay up all night."

What she said was practically the same as what Chiwa told me in the morning. She smiled sweetly.

"Well, you can use our poetry to get rid of your sleepiness."

Chiwa, who was eating a pork cutlet sandwich, stood proudly straight with an 'Of course!'.

"I’ve always felt that when I bring a pen to paper, it's going smoothly! We’ve completed very powerful masterpiece~! The members will certainly be surprised!"

Chihuahua, what about studying for exams?

On her last midterm exam, it seemed like your paper was entirely filled with red…

"Well, why don’t we start with Harusaki-san’s presentation."

"After all that difficulty, you’ve finally written a poem. If you’re not going to read it, what are you going to do with it?"

Chiwa privately turned to herself,and murmured: 'Eeh ~ what should I do~?' Her body twitched back and forth nervously and the sight of her doing that was very annoying. Who was this girl? Her character changed so much.

She must have meant to say, “forgive my boldness”. I was not tsukkomi-ing.

Chiwa stood in front of the whiteboard, surrounded by the attention of Masuzu and me, and began to read her poem aloud.

♪ cut my hair, did you notice?

♪ it’s only 3 centimeters, but did you notice?

♪ so the distance between us is only 3 cm

♪ the bindings between us are only 3 cm

♪ to shorten it to wan cm, I'll try my best?

Coming up with as response was very difficult, as I did not know how to react to poetry.

I was expecting a more run-off-the-tracks work, but I never imagined it would be about the feelings of a 'maiden'. If this had been written by an elementary school child, maybe it would be praiseworthy… But it was already freshman year of high school. One couldn’t write 'wan, wan, nya' at the very least, first you have to make clear whether it's meant to be a cat or a dog.

What was with your 'bindings'?

So, after a surprising new direction, was Chiwa the person wrote the letter?

Chiwa’s eyes glittered with brilliant light. She looked at Masuzu and me, as if she wanted to say: 'Praise me, praise me ♪'. If this girl really were a Chihuahua, she would definitely be wagging her shaggy tail right now.

Masuzu had originally been silent with her head down, but——

"It is really, incomparably frivolous!"

She stood up and slammed the table.

"Harusaki-san, what did you turn the poem into? What is the purpose of this frivolous writing, what's with the 'love, love', what's with the 'wan, wan'? Did you really think you could use that to demonstrate a maiden’s soul?!"

Even though Chiwa was a little frightened, she still said:

"Furthermore about the theme, what's with love and what's with romance? That's where you went wrong in the first place. That’s called a 'love-struck mindset'. You never thought about showing the essence of human kind, or the hesitation of a lonely soul—— Aaaah, forget it! Facts speak louder than words!"

From the bag on the chair next to her, Masuzu took out a notebook.

The cover had a very familiar coke stain.

Right, that was my notebook from eighth grade!

"Here, I’ll let you listen to the real poetry he wrote! And then tremble under its magnificence!"

“This world is rotten” Lyrics by: BURNING FIGHTING FIGHTER

♪ This world is corrupt

♪ so let me punish it

♪ you assume I’m a child and mess with me?

♪ I will turn everything into nothing (Zero)

"What do you think, Harusaki-san?"

Masuzu gorgeously ignored me rolling on the floor, and smiled proudly.

"This is the emergence of the lonely soul, real poetry is supposed to be like this. Can you understand the difference between your levels?"

"Like hell I'll understand! What is a 'Rampaging Animal' (Beast), some kind of rural gang[4]? At the very least pick a better name!"

"And the 'Oh! Zero' part, too. What kind of taste is that? Why are you using a Samba rhythm? All of this is trashy writing on pretentious spirits. It sucks!"

"'Adults are so dirty' is so serious! Is there a reason to repeat it four times? Does he have some kind of hatred with adults?"

"I’m sorry, I’m sorry! At that time my test scores were really bad and my allowance was reduced. I was in a bad mood, so please forgive me!"

The tears in my face dripped stickily, and snivel streamed from my nose, falling close to Chiwa’s feet.

I really am just the dirtiest...

"Oh right, that poem was written by 'the guy of the notebook'. What did you write?"

Chiwa said this as she wiped my face with a tissue.

"Don’t delay it with an act! Just speak and I will enjoy laughing at it!"

With a serious look on her face, Masuzu took out a sheet of paper and began to read aloud.

"A Beautiful New World Not Known to Anyone" Lyrics by: SUMMER_RIVER[5]

♪ as long as I’m with Eita-kun, I’m not afraid

♪ turn over mountains, cross the sea, climb over valleys,

♪ then we’ve arrived at the promised place

♪ Harusaki-san did not respond

With a loud voice, Chiwa tried to tsukkomi.

"Why? Why the body? What happened after turning over mountains, crossing the sea and climbing over valleys?"

"It was unfortunate, probably the attack of an enemy Stand[6]."

Masuzu finished the tea in her cup, sighed and looked as if she felt accomplished.

"Oh, and why is it only you and Ei-kun together?"

"Since this is our club’s theme song, so I incorporated an easy-to-understand relationship between club members."

Chiwa violently scribbled something rapidly on her notebook.

"I’m finished with my new work! You two should listen to me carefully!"

♪ Since little we always, always

♪ Ei-kun and I had a close relationship

♪ I must take good care of Ei-kun, who is like a little brother

♪ okay, okay, I’ll help you clean it up

♪ hey, Ei-kun, look over there

The temples on Masuzu’s face twitched as she mumbled to herself.

"When you were flirting with Eita-kun, what happened to my body in the end?"

"Who knows? Isn’t it because an enemy sutando[7] attacked you?"

Chiwa said as she happily chewed on her Japanese-style pancake.

"Since you’ve decided to do this, I, Natsukawa Masuzu, will not hold back[8]"!

With flames burning in her eyes, Chiwa also stood up.

"If you think you can do it, then give it a tryyyyyy!"

♪ Eita-kun and I are lovers, love, love, kyun

♪ she gets kicked by a horse, it's ok if she dies

♪ the bindings between us will last until forever

What was I doing this entire time? Of course, I was studying for final exams.

Anyways, after all, Japan’s education qualifications are high level!

When the skies outside began to darken, the two of them were finally exhausted of their efforts.

Chiwa’s shoulders rose up and down, largely gasping for air, as Masuzu brushed aside hair damp with sweat from her cheeks. The two of them temporarily concluded with a truce.

I asked them this as I picked up my schoolbag with my studying materials. Masuzu nodded and said:

"That's kinda bothersome. Why don't we just mix everything together?"

"This Rotten Wanwan is a New World" Lyrics by: 'Society for Bringing Out Your Maiden Self'

♪ Harusaki-san is just a corpse

I raised my voice because they had really overdone it.

"But Eita-kun is way too sly for trying to be the only one surviving."

"Exactly, Ei-kun! It would be too frustrating if you were the only one left!"

Only on this issue, can the maidens unanimously agree in unison.

The 'Society for Bringing Out Your Maiden Self' has chosen a theme song!

And they have also ensured that the disciplinary committee will be watching!