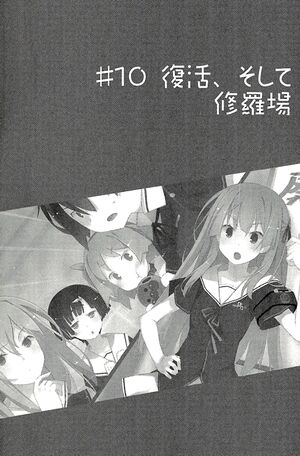 The morning after the fireworks festival.

Because today was the first day of school, I was going to the regular rather than the cram school.

I woke up in a bad mood because of the quarrel yesterday, and to top of it all, that cursed ringtone gave me a visit.

[Subject] Such a wonderful afternoon

[Text] To be at the fireworks festival with Fuyuumi-san. Was it fun?

"Sh-She found out about that already?"

No wait, it's Masuzu, so maybe it's just her regular way of talking.

Even if it feels like a joke at first glance, to reply back to me in such a curious manner...

The instant I arrived at school, Masuzu dragged me to the roof.

Even though it was only 8 o’clock, the sun was very strong—

"Well, which egg would you like me to crush first?"

I lowered my head to one level prior to dogeza[1] towards Masuzu. Heh? Pride? Haha! Ridiculous.

Masuzu folded her arms and sighed.

"What is the meaning of this? After refusing your girlfriend’s invitation, to actually secretly go to the fireworks festival with Fuyuumi Ai."

"You are still playing innocent? Yesterday, a student saw you two meet at school in the evening."

But now that I think about it, even though it is summer, there are still club activities. Even though we didn’t see anyone on the fields, it wasn’t surprising that we had been seen.

Masuzu actually seemed angry. She didn’t have her usual calm and circular cynicism. Rather, the details of her speech seemed to exude quite a dangerous atmosphere.

"Well, if you have any excuses, please go ahead."

Because there was no way I could explain it honestly—

"To be honest, I arranged a date with Fuyuumi a long time ago, from even before the club. It really was a date that we arranged a really, really long time ago, but I forgot about it. When Fuyuumi said it, I finally remembered, thus I couldn’t reject her. If I had, I would have betrayed a lot of things."

"Just a pile of 'small and shameful memories'."

I scratched my head and laughed.

Regardless of the truth, I was trying to honestly express my feelings.

Otherwise, regardless of it being Fuyuumi and Masuzu, I would be lying to them both.

Masuzu shook her head immediately after she heard it:

"I don’t want to hear any excuses!"

But, didn’t you just say you wanted to listen to me…?

"Don’t use words to apologize. Let your actions speak for you."

"You don’t even know about that kind of thing?"

Masuzu stared at me with stern eyes, while she poked her right cheek.

"The same amount of time you spent with Fuyuumi yesterday, kiss your girlfriend that long!"

Such a ridiculous request, she really just hated to lose.

"When you say, 'that long', I actually don’t remember."

"You really don’t get it! For this kind of thing, just an approximation will do!"

"Then it was probably around thirty minutes."

Masuzu’s eyes went wide as she heard that.

"K-Kiss that long? How indecent. Are you trying to get me pregnant?"

"...Well, then let's reduce it to three minutes, with that I'll forgive you."

I faced Masuzu, and put my hand on her shoulder.

Even though Masuzu had kissed me several times, this was my first time taking the initiative...

"*funn*, why are you getting afraid by something like a kiss?"

"I said it before, right? For anti-love people like us, a kiss is merely a mouth to a mouth contact. Moreover, this is just a kiss on the cheek, and you’re actually so jumpy about this? There is no reason."

I angrily put my lips on Masuzu’s face.

Yes, even though it was a kiss, it gave off a feeling as if I was embracing her— I made every effort to prevent my front teeth from touching her.

Even so, Masuzu’s cheeks seemed to melt as my lips touched her smooth skin.

I had to endure an urge to faint.

——All right, this are about three minutes.

I removed my lips, and Masuzu’s clam expression seemed to say, 'Ara, it’s over already?'.

"With this, can you forgive me?"

I asked, my breath unsteady. Masuzu tilted her head and properly pushed her hair aside.

That's not how we articulate, Masuzu-san.

I took the opportunity to tease her. Masuzu’s face became really red, and even her ears blushed.

Anyway, she was an ordinary girl after all. My eyes got a gentle feel to them, and—

"As expected, I can't forgive you after all!"

"Because I don’t like how your eyes look. I won't forgive you unless I gouge them out..."

Really, my girlfriend was too willful.

The first day of school was over and I was about to go home.

Fuyuumi Ai was wearing the armband of the disciplinary committee as she walked into Class 1-A.

Fuyuumi only quickly said these words before she rapidly turned around. I didn’t see any of her 'A-chan' expression from the day before. She was the usual demon disciplinary committee member.

"Chiwa, Hime, you two have also been called here?"

"It's rude to suddenly call people out!"

"But since it’s Master's order, we must obey."

At this point, Fuyuumi finally entered.

As she looked at us, she didn't have that usual stern expression.

"Sorry to keep you waiting. I went to the faculty room for a moment."

What was it? Does it have to do with how the club was shut down?

They couldn’t have issued a more severe punishment than shutting down the club, right? If that were the case, I could only imagine suspension and expulsion. But I didn’t think we did anything which would deserve a punishment that severe…

Chiwa and Masuzu seemed to have a similar train of thought, and their expressions were rather stiff.

Like she did when she announced the club would be shut down, used a marker to write a few words on the whiteboard.

Apart from Hime, the three of us cried out loud together.

Fuyuumi faced us, and gave a 'Fufun' laugh through her nose. She smiled as she said:

"Aren't you going to thank me? This was something I proposed to the teacher."

"I told the teacher that my evaluation of 'The Society for Bringing Out Your Maiden Self' being harmful was actually my mistake."

"And what actually happened to let that mood of yours change like that?"

"Because I'm interested, in those club activities of yours!"

"When you say, 'to become popular', that also means to be 'more adept in love', right? This idea in itself is shared between all girls of marriageable age. Thus, we cannot deny this feeling, The more you suppress it, the bigger the threat of it running out of control."

"So in conclusion you want to say?"

"In other words— You need a 'Master' that can guide you on the correct path of pure love!"

The three of us cried out loud together again.

On the other hand, only Hime nodded and said, 'Great'. Who was this girl? When did she start to worship Fuyuumi?

"In short, due to my connections, I can supervise, coach, and participate in your club, along with the help to cancel your club shut-down. I’m proposing to you advice as someone who has a boyfriend. You're happy, right?"

"DEFINITELY NOT HAPPY AT ALL!"

"Stop joking! Why would we let you in our club?!"

Then Fuyuumi retorted, unwilling to lose:

"It’s not like I'll join your club. I'll give you lessons."

As Chiwa quarreled with Fuyuumi, from beside them came:

"Well, because our situation is rather urgent, and there doesn't seem to be any other choice… If it can prevent our club from being shut down, then we will take in another person."

"Master’s entrance into the club has the strength of 100 people. So the day that I become popular and make Eita hug me will come closer."

Hime was just Hime. She had a very welcoming look.

Then it came to me— Because of this new fire, I clutched my head, very troubled.

I had a feeling that this mayhem would get worse…

Fuyuumi whispered into my ear:

"I will definitely make you stamp the 'Marriage Registration Form'. Prepare yourself!"

Cold sweat ran down from my spine.

My whole summer should have been nothing but hard studying, right...?

"Then I’ll give you guys a demonstration right now! I’ll borrow Kidou-kun to demonstrate how I usually go on dates with Michel!"

"Why does it have to be Ei-kun?! You can just bring Michel here!"

"N-No! Furthermore a dream guy like him would blind you all! Kidou-kun is better for this!"

"Is it possible that Michel can also use Dragonic Aura? If so, he’s really worthy of being Master’s boyfriend."

"Stop! Inappropriate interactions between those of the opposite sex are a violation of school rules! It is prohibited—!"

"But that runs for you as well, isn't that so?"

"*funn*! Hands? I’ve already had a taste of Eita-kun's lips so many times, that I can't even count it anymore."

"Oh, who knows? Eita-kun put his tongue in so forcefully♪."

"Incidentally, I also shared a bed with Eita before. It was my first time."

"I can’t pretend that I didn’t hear that! Ta-kun, what is with all of thiiiiiiiiis?!"

I’m Stuck in the Mayhem between my Girlfriend, Ex-Girlfriend, Childhood Friend, and Fiancée! 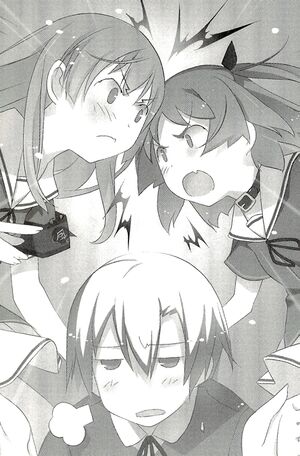