#4: When my Best Friend wants to go to the Sea, it's Mayhem[edit] 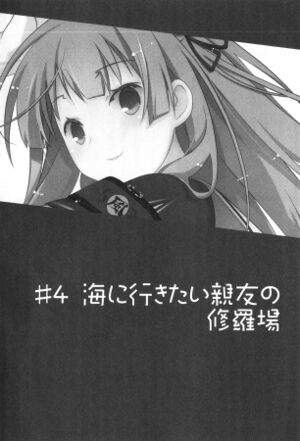 After the end of summer cram school, Fuyuumi Ai, Asoi Kaoru and I all went to the family restaurant in front of the station. It had already become a habit to drink tea in a relaxed manner before we went home like this.

Kaoru, who was slowly eating the cream off of his chocolate parfait next to me, got big eyes.

"Finally, the 'Maiden's Club' is finally doing something a proper club would do."

"Fufufu, this is mainly all thanks to me!"

Across from me, Fuyuumi very proudly took a huge bite of banana from her banana parfait.

That being said, I only drank coke. Even though ordering drinks alone was rather expensive, I felt that it was better than to eat sweats before dinner. Furthermore, Chiwa was probably waiting at home for me, being hungry.

"Thanks to you, my peaceful days are moving farther and farther away."

"Eita, you should be happier. With Chihuahua-chan and Natsukawa-san, along with Akishino-san and A-chan, aren't you monopolizing all the cute girls at Hane High?"

"As long as it were a boy, it wouldn't be weird for anyone to feel envy. I wouldn't find it surprising if there already were one or two straw dolls that are set on you."

Today, when I had been in the toilet stall (large) at cram school, Yamamoto-kun from the football club was whispering in the neighboring stall, '*STAB*— Not Popular. Ye, not Popular. I'm just not popular— *STAB*. Not popular at all. Notoopularnotpopular. The reason why I play soccer? To be popular. I also tried being in a band... I didn't get any more popular. Why am I not Popular? *STAB*. Why are you the only one being popular—? *STAB*. For Becoming Popular... *STAB* I can't forgive you—*STAB*—!' Rather than whispering, at the end he had basically been shouting. Sorry, Yamamoto-kun. If I could have, I would have really liked if we could switch places. I really would have done that, *STAB*.

"Then, Kaoru, even you are envious of me?"

Kaoru tilted his head, and with a somewhat lonely expression that I couldn't understand said:

"But rather than you, the one I'm envious of are Natsukawa-san and the other girls..."

What does that mean? Why would you envy those?

Fuyuumi pounded the table with her fingers.

"Listen, Kaoru. Today is my treat, so when we are in the boarding house, can you please send me some mails?"

They nodded to each other, leaving me in a daze.

"Have you always been texting each other like this? Even though you have this many chances to talk at each other during cram school, you still have that much more to say?"

"No, no, we're establishing an alibi."

"These are supposed to be texts sent by my Michel. Over three days and two nights, it would be weird if I didn't get any mails from my boyfriend, right?"

It seems like Fuyuumi had become a part of a club she truly belonged to.

"But if the sender displays 'Kaoru', wouldn't this plan just fail?"

"No problem, we just have to randomly register a free mailbox."

If you're precautious to that level, then you're probably on eyelevel with Masuzu.

"But isn't it better if you give up pretending to 'have a boyfriend'? It looks somewhat tiresome."

"You're dumb. With this kind of thing, it'd be the worst if I stopped halfway."

"It's exactly like that! After lying once, one should take responsibility to carry it out till the bitter end!"

As one would expect of a disciplinary committee member. Even when it comes to lying, they are truly responsible.

On the other hand, Kaoru was resting his chin on his hand at the table.

"That being said, since you're going to the sea... That's nice~. I heard Funase was quite beautiful, not to mention that there are even high-class houses and top-level restaurants, right?"

"That's around the third beach. We'll be staying at the second beach, which is full of tattered hotels."

"Even if that's the case, I'm still envious. Even if it's just once, I would also like to enjoy playing at the beach."

Kaoru's eyes looked into the distance, and he gloomily sighed.

When he mentioned 'just once', did that mean Kaoru had never been to the beach? Hime too, so there actually are people like that?

"You should try coming too. If it's just one person, I could just ask Saeko-san. And it'd probably be no problem."

Kaoru smiled wryly and waved his hand back and forth.

"I told you about it before, right? I can't be under the sun. If I'm on the beach at the height of summer, it'll be pretty bad."

"Don't worry about it, your kind thoughts are enough— If it weren't for my body, I would for sure be the first one to tag along."

I had always felt that his choice of words had a strange feeling.

"Just for a little bit, let me take you up on your offer…"

Kaoru shifted slightly towards the side, nestled against my side with his shoulders close to mine.

He leaned his head on my shoulder, his face looked just a little like that of a regular girl.

His hair had a very nice smell, somehow it felt kind of strange.

"W-What are you doing all of a sudden? What's wrong?"

"Even if it's a little, let me take a summer training camp, okay?"

Kaoru sometimes did puzzling things like these, but it wasn't something worth worrying about.

On the other hand, Fuyuumi who sat opposite to us looked as if she was in a flaming enraged state . The straw she held in her mouth went 'Poof—!' as her cheek inflated.

"What's with this! You two are having your fun as you set me aside like a bystander!" 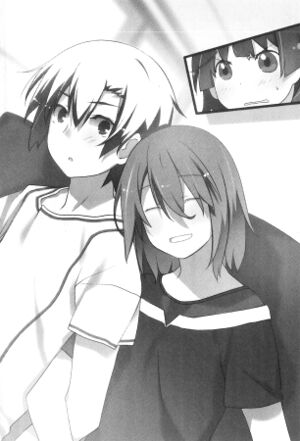 Kaoru smiled and returned to his original position, and that was the end of the 'summer training'.

At this moment, the cell phone that Fuyuumi had put on the table sounded with a melody. It looked like it was a text message.

"Hime-chan. We've been texting each other recently."

Fuyuumi said as she replied, swiftly manipulating the phone her fingers. I felt like I needed to congratulate her. Girls could text really fast.

"What type of things do you guys talk about?"

"Of course it was a love consultation. After all, I'm her master."

Fuyuumi rather proudly arched her shoulders.

"Don't infect her with ideas too weird! Hime's not like you guys, she's very pure."

As Kaoru finished his parfait, he used a napkin to wipe his mouth and said:

"But it's quite strange. Having Eita's ex-girlfriend Akishino-san running for advice to the fiancée A-chan."

Generally speaking, this was something unimaginable. It was quite an interesting scene.

"——Rather, how come? Have I told Kaoru about the 'ex-girlfriend' thing before?"

"I heard A-chan mention it. When I heard about your girlfriend from a previous life, my eyes narrowed."

So the news had been leaked.

After Fuyuumi had finished writing back, she put down her phone.

"It certainly wasn't something about girlfriends from the past lives—— What I do is basically teaching her methods of love, for the sake of changing Hime-chan into an ordinary girl."

As a 'weirdo' at school and shy of crowds, Hime had been trying to change bit by bit after she had joined the club. I also wanted to help her if I could.

Kaoru tilted his head and said:

"But is that okay with you, A-chan? Won't she become a powerful rival contending for Eita like this?"

"No problem, there's no reason to worry about that."

"If Hime-chan becomes an ordinary girl, she wouldn't have any reason to like Ta-kun!"

What kind of expression am I supposed to make now?

Should I get angry?

Or should I smile wryly and add 'of course—'?

"Kaoru, why are you smiling?!"

No, when I was in middle school, I had been like that.

But ever since I've been going to high school, I've been very rule-abiding, very ordinary, very serious, very… ordinary…

I suddenly felt very discouraged, and Fuyuumi patted my shoulder.

"The only person who can take care of Ta-kun is me. Before you get dumped by the other three, wouldn't it be better to just stamp it now?"

My hoarse shout echoed throughout the family restaurant.

When I was together with A-chan, the shouting just never stopped!