#5: The Elated Training on the Night Before is Mayhem[edit] 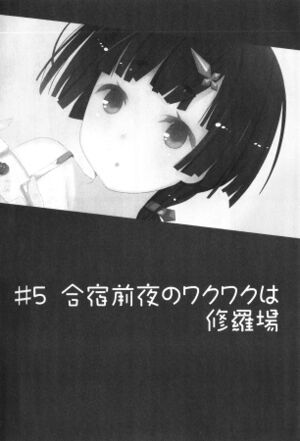 After that, several days passed and it was finally the night before summer training camp.

Having said that, nothing particularly unusual had happened. Like always, after I took care of the house chores, I started my daily study until the time to call it a day is here. Right now I'm going to review the exercises from the first part of the year content of cram school class.

After staring at the mathematics textbook for an hour, my cellphone rang with the national hymn of some in game country which dubs as an RPG opening theme.

It was a text from Hime.

Somehow, it made me smile.

I could almost see the excited look on Hime's face the day before the trip.

While I was laughing, another text came.

"Is her eyesight bad?"

But it's true that seawater will sting the eyes, so it's probably better if she brings it.

I was about to reply, but just when I put my finger on the keys, another text came.

"Why would you need Yakisoba!?"

You could probably stuff it into a bento, but it wouldn't taste good after it cooled down.

I pondered a little bit — and I finally understood! She was referring to the yakisoba sold at stands at the seaside. That dish is such a common thing, I didn't know how it would taste any different at the beach.

It seemed like Hime was thinking about ｢typical beach accessories｣ when she wrote all that.

I was in the middle of typing that she could buy it there, so there was no reason to bring it, before another new message came.

Ah, there was finally something ｢like｣ her.

The so-called trident is the one that's said to be used by Poseidon of Greek mythology. In the world of RPGs, this usually was a legendary weapon.

If you had one, you might as well bring it. I really wanted to see it — I was in the middle of writing this when another text came.

I nearly broke my fingers, as I violently typed a reply.

After I sent it, I immediately received a reply.

Knowledge from the net, is just unrealistic jabber.

On This point I have to absolutely lecture her about.

After about five minutes, the reply came:

This wasn't working. It couldn't be solved like this.

I called Hime and spent almost an hour trying to explain there was no need to bring ｢contraceptives｣, and that she shouldn't blindly believe what was written on the Internet.

I only realized after I asked, but Hime didn't seem to understand what a ｢contraceptive｣ was. I ended up using an abstract analogy with storks and cabbage patch vocabulary to explain. Afterwards, even through it was the phone, I could see Hime sink shyly into silence.[2]

Although she once climbed naked into my bed sheets in a very radical move———— I've always felt as if she didn't understand what ｢that｣ meant. Among today's high school girls, she could be considered one of those rarely encountered innocent girls.

I hung up the phone and looked at my watch, and it was already eleven o'clock.

I was preparing the use the remaining hour to memorize key dates in Japanese history, when a ｢pah｣ sound came from the room's window as if something had hit it.

I got up and opened the curtains and windows, and faced the girl from the window next door and shouted: 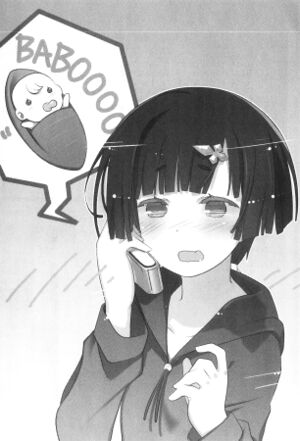 "Because when I called your phone, your line was busy—"

With her hair down and dressed in pajamas, Chiwa smiled and gave out a ｢ehehe｣. Probably because she just showered, her cheeks were still rather warmly pink.

"Then you should just press the doorbell to my house."

This girl was like this from long ago too. Because she found going down the stairs troublesome, she would leap across the window spaces like a monkey and come to my room.

Chiwa immediately took out a white paper bag with a ｢Janっ｣:

"This is a new swimsuit! At lunch today, I went with Mei-chan and the rest to buy it!"

The swimming suit I'm going to bring, was bought during my first year of middle school.

"We can enjoy ourselves at the beach! Like split open a watermelon, set off fireworks! I also want to eat barbecue! I want to roast lots of pork and beef."

Chiwa's spirits were much higher than usual, just like Hime, as if they were floating in tomorrow's sea already.

After a few more moments of ruckus, Chiwa lowered her tone slightly, and said:

"In the end, it also looks unnatural in other people's eyes."

I couldn't help but feel my heart jolt.

"How should I put it? I guess you guys aren't the same as normal couples."

"What's so different with others? What's so weird?"

Chiwa put her finger on her lips as she thought:

"Ah—I don't know….. it's almost the feeling like its an act? Himecchi and Ai probably have already noticed too, I think?"

It's just like the talk I had Masuzu pointed out. Starting tomorrow, during summer training camp, we'd let them recognize that we're a real couple as ｢boyfriend and girlfriend｣.

Chiwa didn't know what I was thinking, and she slapped her chest resolutely and said:

"I will definitely take first place in that miss contest, and then I'll make Natsukawa release you!"

If Chiwa came in first place, and Saeko-san wanted her to become my ｢bride｣, then what would happen?

Would I need to break up with Masuzu, and then start going out with Chiwa?

No, Saeko-san was joking. How could such a thing actually happen—

I was pulled back to reality by Chiwa's voice.

After confirming the details of where to meet tomorrow, I closed the window.

When I was about to close the window, I heard Chiwa say, ｢Hello? Ai?｣. Where they already at a point in their relationship that they called each other frequently? Even though they fought so much, I guess Chiwa really could cultivate friendships with anyone.

—My way of thinking was so simple, I only later understood how superficial I was.

By this point, it had long formed around me—

I was tightly besieged in the "fake". 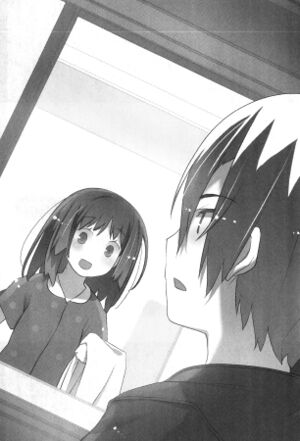