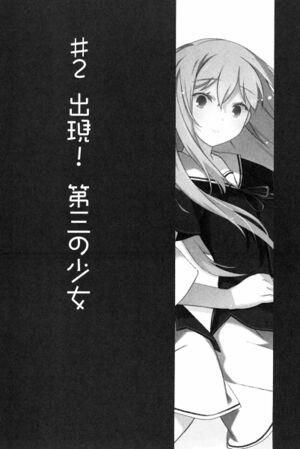 Harusaki Chiwa, a member of “Jien-otsu”, seems to be often described as “cute as a little sister”.

I, Natsukawa Masuzu, also have a little sister, but I totally can’t agree with this comparison. If it is “annoying” then I can understand, because I get annoyed by just thinking of my sister’s proud face. I positively want to make the analogy “as annoying as a little sister” a trend.

Okay let’s put this aside for now, and talk about our situation now.

“Onii-chan, I wanted to see you so much!”

The middle school girl said that, pushed my “boyfriend” down and embraced him.

If it was normal, I would treat it as “catching him while cheating”, and use him as a sacrifice, but—

“Eita-kun, do you have a little sister?”

“It is not illegitimate!”

Hmm, looks like he doesn’t know anything about the “little sister”.

Under my interrogation, the girl let go of him and stood up.

She smiled politely and bowed.

Both her looks and her name are elegant. People whose names contain bright words like “Haru[1]” or “Mi[2]” are slightly hard for me to handle, some other examples are “Haru[3]” and “Saki[4]”.

She panicked and spoked up.

“Tha- That’s- I’m sorry! I called you onii-chan without realizing.”

Tears started flowing out of her eyes.

This is too cliché no matter how you see it, I can’t even follow the progress, but there is a reality of returning to the original point after going a full circle.

I looked at him and tried to see what he thought.

That’s really out of my expectations, I never thought there would be someone even more clichéd among us. I’m worried that he might get scam by the “My litter sister scheme” one day. Onii-chan? It’s me [5] it’s me! Your little sister! I’m your sister so send one million yen to me now!

“At his fourth grade sports day, Misora’s brother wetted his pants in front of the entire school.”

The brother’s tear duct was turned off like a pipe.

“When you protected me from the delinquents, your facial expression looks exactly like my brother’s when he wetted his pants♪”

Then he shed tears of a different meaning, and stuck out his thumb. I think his show of bravado even at this point in time is really deserving of a former chuunibyou.

Suddenly, I saw two policemen running towards us from the alley, they should be here because I called the police just now.

“They are really slow, let me explain to them.

I clearly never told her my name.

She probably heard it when he called me just now.

I stopped the police and explained everything to them, still slightly alarmed. Although I can’t use words to describe this discomfort, it is enough to make me annoyed.

I told the police the delinquents already ran away, got them on their way, and turned around to see—

Misora Miharu embraced him from the front, and kissed his face.

Her arms are tightly clamped behind his neck, and their bodies are sticking to each other like lovers.

Although I can’t see his face from my position, I can see Misora-san’s face clearly.

Her smile was mature, totally different from a minute ago.

Although she knows I saw it, she is still smiling!

He held Misora’s shoulders and distanced his body from hers, seems like he didn’t notice her smile.

Teehee, she smiled innocently, and knocked her head.[6] This innocent movement feels like she is trying to invoke others’ protective nature.

I hide my anger, and walked towards them.

He still doesn’t know anything, I raised his chin with my hand, closed our distance in a breath—I kissed him.

Of course it is not something like a peck on the cheek.

It is what only lovers could do, a mouth to mouth kiss.

Although his eyes turned white and struggled—no, I can’t forgive you, this is your retribution for flirting[7] with other girls, I have to let you face it here and now.

Yes, this is his punishment, it definitely isn’t a romantic act.

His sudden yell woke me up.

……my face, it isn’t blushing right?

“What ‘what are you doing’, just a kiss won’t hurt right? You’re my boyfriend after all.”

“Of course it’s not, how can we do this in front of others!”

“You wanted to stick your tongue in? How indecent.”

I didn’t listen to his complaints, and stole a glance at Misora-san.

Come on, what is your reaction—?

“Amazing! This is my first time seeing a kiss!”

I thought she would be surprised or frustrated, but she actually looked happy, looks like she is mentally ill.

“Onii-chan, are you going out with Masuzu-san?”

“You even have such a beautiful girlfriend, you are quite something♪”

When the both of them are talking like this, it really feels like they are siblings, at least the mood is different from that uneasy feeling before.

……was that just me overthinking things?

“Awawa, it is already this late, I am going to be late to tuition.”

Misora Miharu glanced at her watch which looks too classy for a middle schooler.

“Are you going to tuition? Doesn’t Fifnir help you enter university with ease?”

“Because Misora’s result is not good, I can’t catch up if I don’t work harder.”

She tugged at Eita-kun’s sleeve “softly”, and glanced upwards at him.

“Onii-chan, can you teach Misora next time?”

“Okay, if it’s eight grade’s homework it shouldn’t be a problem.”

Misora-san yelled “Banzai!” and hugged him, while pulling his face and pressed it “Tighttttttttly[8]” against her chest. Is she trying to seduce him?

“I wanted to butt in since quite a while ago.”

Misora-san held on to the struggling Eita-kun, and tilted her head, puzzled.

“I think you still can’t fit his face in between it right?”

No matter how you see it, it’s about average for her age, let me correct that, it is below average, to trap a face should take a bit more time.

“Thi-This is a charm to make it larger!”

She puffed out her flat chest.

“This is called the ‘pofupofu～’! Onii-chan taught me this!”

This kid’s brother is really……

As expected of someone similar to Eita-kun.

She took out her phone, and exchanged email addresses with him through infrared. I think giving someone you just met your mail is inappropriate, she is totally like a middle schooler, being oblivious to this.

He flashed a tired smile and waved back.

……for some reason, I feel disinterested.

His seemingly happy expression annoyed me, so I grumbled softly.

Then I got mad, this is getting weirder and weirder.

I took out my phone and quickly pushed the button.

“Ma—Masuzu-san, who are you calling?”

I feel relieved just by listening to his screams—

Even I don’t understand it.

This man, he is just a fake boyfriend after all.

Why would I kiss him…

I was walking to school when a familiar voice came from behind.

Harusaki Chiwa overtook me and immediately braked, and stared at me, ignoring the height differences.

“You’re still asking me what’s wrong! You lied to me yesterday!”

To be able to go home alone with him yesterday, I told Harusaki-san a rumor. “The cafeteria’s pork chop sandwich is on half price.” No, it was a white lie.

“I’m sorry, what was on half price was Harusaki-san’s breasts.”

“If you want to sell a fight[9], I would buy it even without half price.”

“Stop it with the breast! What more do you want to say, half price for the entire year!?”

The other students are looking at us with “what is going on” written all over their faces.

From their eyes, it isn’t abnormal even if we start fighting, but because it is Harusaki-san—

She instantly sheathed her attacks.

Although I have only known her for a month, I can already completely understand her personality. Quick to heat up, yet quick to cool, quick to anger and cries a lot, totally a lovable character, so I can understand her being popular among both boys and girls.

We ended up going to school together without planning to.

“It is my turn to shine in today’s club activities, Natsukawa should just keep silent and watch.”

Harusaki-san took out a transparent bag tied with a cute ribbon.

There are about four pieces of black things inside.

No matter how I look, it looks like charcoal, or rabbit’s waste, or even the “ohagi that will turn hard after leaving it for three days”.

“You are trying to use that char……I mean, use the cookies to seduce Eita-kun’s heart?”

Harusaki-san looks like she realized something, and covered her mouth.

“N-No! This is for club activities!”

“Jien-otsu’s primary objective is to train us into fine ladies, right? Then, isn’t it bad if you can’t even cook? Ei-kun is the guinea pig!”

“Yes, yes, you are so pumped up for club activities huh.”

—it really is easy to understand.

The only one who doesn’t notice it is Eita-kun.

The only person who thinks it isn’t nobody noticed it is Harusaki-san.

Our “love triangle” is already quite infamous in the school. A triangle formed by a boyfriend, girlfriend and a childhood friend. From the bystanders’ view, there should be nothing more interesting than this to watch, Even as someone who is anti-love, I am waiting for this hilarious “carnage” to be famous, and destroy the image of “love” among them.

Although Harusaki-san successfully held down her skirt immediately, her cookies fell weren’t so lucky. Because we were walking down a slope, the wind blew it down.

Before Harusaki-san can catch up to it, the bag hit a leg clad in white socks.

The owner of the socks picked up the bag.

Why is she here? Although Fifnir High is near here, but meeting her both yesterday and today is too much of a coincidence.

“Are you an acquaintance of Natsukawa? Thank you for picking it up for me—!”

Harusaki-san who was oblivious of everything ran to her.

Misora-san smiled and look at the bag, and—

Harusaki-san and me yelled at the same time.

Misora-san’s hand slipped, and the bag fell to the floor again.

When she wanted to pick it up, Misora-san stepped forward.

For some reason, the step was larger than usual.

The branded loafers made a “Guri—” sound, stepping on the bag she was supposed to pick up—

Harusaki-san’s shriek echoed on the road to school.

Misora Miharu made sure to step on it again, and made an innocent smile.

……this woman, is definitely not simple. 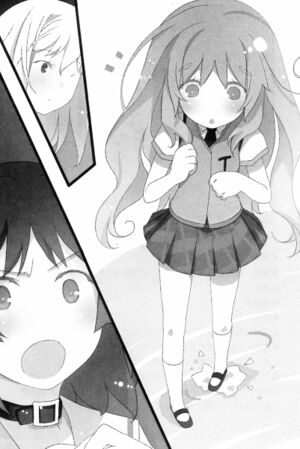 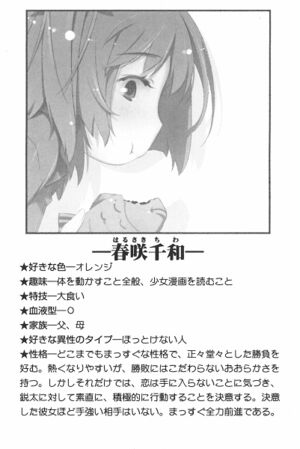 ★Type of preferred boy--People that can’t be left alone

★Personality--Straightforward till the very end, prefers to win with honorable means. Easily pumped up, but will not be too focused on the results. Because of this, she realized she will not get the love she wants, so she is determined to straightforward and proactively seduce Eita[11]. Nobody can be stronger than her at her most determined, she will move straight forward with all her might.