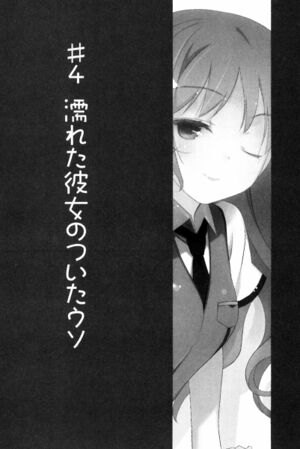 #4: That which the Drenched Girlfriend Said was a Lie[edit]

For an anti-love like me—Natsukawa Masuzu, to say that this problem is huge is an overstatement, but to say it is a small issue is an understatement.

The end result of love is related to lust—when I used to think that way, I thought it was something to be spat at. However, I heard that men will have “this type of feeling” towards girls they don’t love. This has nothing to do with love, it’s there as long as the woman is appealing; it seems to be normal.

That’s how I honestly feel about it.

However, I’m anti-love, not anti-animal, I don’t deny this behavior that only men have. Although I don’t deny it—if you stare at me with those evil eyes it’s a whole different matter. Can’t be forgiven, can’t be forgiven, can’t—be—for—given……although I think this way, I can’t just report them to the police for being “stared at”. They say Japanese men are honest, but it’s all lies. Their way of looking at women is more obscene than foreign men. Source: me. That’s why every time I walk on the streets I have to recite “may the presiders warriors be my vanguard[1]! Mmph!” once every five minutes. In my heart.

I once told my "boyfriend" this, and I got this reply.

'Hayakuji is a mantra from onmyoudou[2], I don't think it's effective against the dirty eyes of others?'

Because I was angry and lost control, I hugged him tightly in front of the entire class. I stared at him from a super close distance. I tried touching his elbow with my breasts.

'Wha-what are you doing all of a sudden!?"

'Maybe it'll disperse the lewd feeling you're having right now?'

'I don't feel anything of that kindddd! Who will feel lust towards you!'

I continued hugging his right arm and did a light sack dance.

‘Understood! I understand! May the presiders warriors be my vanguard! Mmm—!’

‘Oh my, your face is still quite red—? Is the effect too weak? Do you want to try adding “Masuzu-san is super cute” after every word?’

I can face a boy’s lust at such a time—

I even hate the feeling from being stared at by men passing by me on the streets.

Why is it different when it comes to “him”?

First up, me. I poured water all over myself, while standing behind the school building after school in a wet gym uniform. Because my underwear was visible, I had no choice but to hug myself.

Next up is “boyfriend” Kidou Eita. He passed out while still being tied to the chair, his mouth wide open, his eyes rolled back, not moving at all. Some bugs even gathered on his face.

She was soaked like me, her uniform blouse see-through. Different from me, no matter how I looked, I couldn’t find her bra lines—looks like she’s really “not wearing any today”.

You can’t get married now.

However, she didn’t seem to care about it at all, pressing her age-fitting body with little curves against Eita-kun. The most annoying thing is her face. It’s as if Kidou Eita is her belonging, she held her ground against me with a smile of victory.

“Ho-hold on, Natsukawa, what are you trying to do?”

Harusaki Chiwa was flustered under our clashing glares.

“Nothing. Just continuing our ‘club activities’.”

Yes. This is a part of our club activities.

Soaked girls are popular, so we should get close to Eita-kun with our erotically soaked bodies!—that’s just an excuse; it’s just to trick Harusaki-san and make fun of the Chihuahua trembling from embarrassment.

Due to Misora Muharu suddenly barging in, it ended up being me, instead of Harusaki-san, falling to this state. I can’t help but think of the saying “you reap what you sow”, but my dictionary doesn’t have such a weak saying.

Let’s switch to the offensive.

“Well then, Misora-san, can you give me your seat?”

“Hmph, can you do something……more aggressive than me?”

For an instant, Misora-san looked as if she was trying to see through me, and got down from Eita-kun’s knees.

I got behind him, and started to loosen the ropes binding Eita-kun. The ropes were hardened after absorbing the water, so it took some time to untie the knot.

While I was busy battling with the knot, Eita-kun moaned and moved his body; looks like he woke up.

I finally untied the knot, and circled to his front.

I sat on Eita-kun’s knees.

The water I poured over my head with the rubber hose before already flowed down to my gym shorts. The wet fabric was sticking to my back and butt, it was so cold I almost screamed.

“Don’t you do it often for me? Full body massage♥”

“Huh!?” came out of everyone except for me.

Harusaki-san made a “Grr…” growl like a bulldog while staring at us. Honestly, isn’t it an overreaction for a massage? If she knows we already kissed, I wonder what will happen.[4]

“Well well, this is troubling.”

“If you understand, get off me right now!”

“Then let us change the topic; recently the stray cats near my area are noisy, it’s troubling me.”

“Ah? You can just contact the public health center.”

“Regarding that, their cries are quite strange though. ♪Meow~the secret is coming meout[5]~♪Co~ming~meout.”

“Please let me do it, Masuzu-sama!”

Misora-san looked at us suspiciously.

“What are you guys whispering about since just now?”

I smiled at her and took a deep breath.

“……I’m not responsible for what happens.”

I won’t let myself be shamed in front of Harusaki-san and Misora-san.

As the president of Jien-otsu, and as the “girlfriend”, I need to show them what I am made of—

I let loose a sound without realizing.

Because Eita-kun’s hands are on my side.

“I-it’s only because my clothes are wet and cold.”

That’s not a lie.

Eita-kun’s fingers feeling “foreign” is also one of the reasons.

Does getting touched by fingers that are not mine feel this……different? We were always holding arms after all.

I closed my eyes, holding back the itchy feeling coming from my sides.

The places that were touched by his finger felt like they were burnt by fire.

After having finish teasing my sides, his fingers stopped below my shoulder blades, and gradually moved to the front side of my body.

“……if you touch me at strange places, I’m killing you.”

“Also, if you get excited, I’m killing you too.”

“It’s because I’m a man that this is impossible!”

Eita-kun’s breath was undoubtedly rough. Since quite some time ago, he has been breathing down my ears , just like an animal. Although I’m not unhappy about that—I’m starting to feel weird.

“To control your lust, why don’t you try reciting the hayakuji?”

“What’s with that, you were treating me like an idiot when I said that……kyaa!”

I couldn’t stop my cry from coming out.

His hands unexpectedly cupped the bulges on my chest.

The tip of the breasts contained in the black brassiere was met with friction, a sweet numbness flowed through my body like poison.

I let out an “ahh” sigh. I have to let the heat welling up deep in my body escape.

“So-sorry, my hand slipped! Are you okay?”

My shoulders rose and fell heavily as I panted, forcing a smile.

Misora-san observed us with her arms crossed; her eyes showing frank “doubt”. I can’t let her see my weakness. This behavior is a usual occurrence, habit, nothing to be questioned. I have to show that this is the case.

Eita-kun sounded as if he was worried.

Although I replied with that, I realized this myself.

My body is already hotter than his.

My entire body is soaked by some liquid that isn’t water.

The one that has to recite the hayakuji, is me.

“This is impossible. Let’s stop this.”

“Why are you so stubborn! Nothing good will come out of this!”

To me, “being stubborn” is almost like my only reason to exist.

For example, right now, if I don’t put up a farce of “I’m Kidou Eita’s girlfriend”, “I’m the president of Jien-otsu”, if I don’t wear a mask like that, I can’t face Harusaki-san and Misora-san.Because the raw, natural “Natsukawa Masuzu”, doesn’t know how to interact with other people.

This is the fate of me, who lives by being a fake.

“Well then, think of it as I’m begging you; please continue to massage.”

His fingers left my body.

His arms embraced me tightly from behind.

A boy’s body warmth started expanding across my back, warming up my freezing skin, while calming the “beastly” heat in my core. 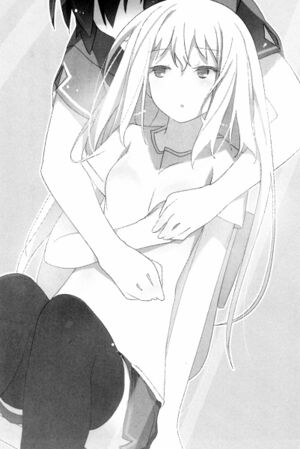 “A-af af af-after all, we just need to show her that our relationship is close, right?”

He said in a high pitched voice.

“If that’s the case, compared to something like a massage, doing it this way is a-a lot better!”

Why didn’t I realize it?

I fell for Misora-san’s trap, only thinking of radical things.

I only needed to say one sentence.

The only person who can say that to him—is me, the “girlfriend”.

I stole a glance at his face; it was thoroughly red, as if he was a monkey.

However, I’m sure of it.

I think, my face is—just the same.

I turned my sights to the source of the low voice, and found Misora Miharu staring at me with a dark expression.

That’s slightly different from the behaviour of “I’m bitter against the fact that they have a good relationship”.

She stared at me, as if she was looking at something that was unreasonable and absurd.

A loud roar suddenly came from beside us, and the next moment, we flew through the air, hitting the ground.

She hugged him like a playful puppy, her face seemingly near to tears.

How should I put it, she was overflowing with sincere liking. So straightforward it makes others jealous.

“Co-come on Chiwa it hurts! Stop it!”

“Do that to me too! From behind, embracing me with your arms like that, you’ve never done that to me before, have you!”

“Of course! Why should I do that to you!”

“How mean—! Are you discriminating against your childhood friend!?”

A couple’s fight suddenly started. Nobody could interfere with them.

The gym building became quite long. The sound of the baseball club practicing on the field was already long gone.

I stood up and patted away the dust on my gym uniform, and took out a bath towel from my bag to wipe myself down. Although it’s summer, a wet body still reacts to the cold wind of the evening.

“Well then, Miharu will be going ahead.”

Holding her vest in her hand, Misora Miharu wanted to leave.

I called to her back.

“After doing such a thing, you sure seem quite unconcerned with all these huh?”

I said that, meaning it to be light sarcasm.

I didn’t think it would have any effect. I thought the usually aloof her would simply brush it off.

Misora-san stopped walking, and turned her head towards me slowly.

Tears formed under her huge eyes, and clenching her teeth, she replied. 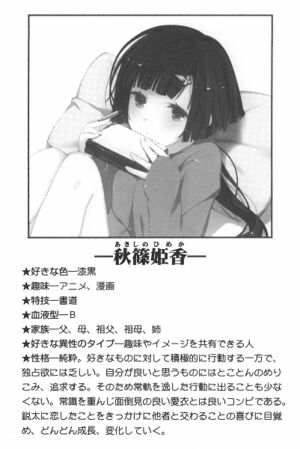 ★Personality—Pure. Proactive when it comes to things she likes, but on the other hand, lacking the desire to monopolize. Will indulge in chasing after things she thinks are good, thus often stepping over the line. Good friends with Ai, who prioritizes common sense and is good at looking after people. Falling in love with Eita was the cue for her to start interacting with others, and the resulting happiness helps her to continuously grow and change.