#9: Receiving Guests with Girls at an Old Hotel is still Mayhem[edit] 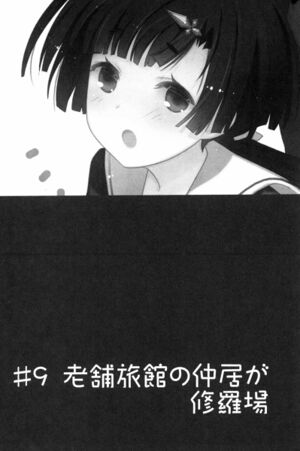 The weather was sunny and cloudless; although, it was a little chilly since it was only ten o'clock in the morning.

I left home and headed towards the address of Hime's home that Mana gave me.

Originally, Mana repeatedly insisted that she wanted to come, but she eventually agreed to let me go talk first. Besides, if Mana had come along, everything that I wanted to talk about would become complicated.

I got on a bus towards the foot of Hanenoyama Mountain in front of the train station. Even though it was noon on a Saturday, the bus was full. Apart from me, all the passengers were either carrying a mountain climbing backpack or a canteen. They were dressed as a group of people who were going out hiking. When I was in elementary school, I also went hiking, but I had no idea this was such a popular place of interest.

As I got off at the bus stop, I saw a sign with ｢Akishino Hotel Ahead｣, which had Hime's family name in it. Around me were these huge walls that surrounded a massive flower garden. Since this wall was way too long, I had no idea where the gate was. It was just like the proverb: ｢Even if you know where the house is, you may not know where the door is｣.

I had no choice. I could only follow the family that also got off at the same stop as me. This family was heading towards the building that was clearly used as a hotel, so I figured I'd ask the reception desk what was Hime's address.

When I entered the entrance hall that seemed just like a samurai's residence taken out of a history book, an elderly lady came and very naturally received the guests and led them to the reception desk; as for me, a young girl came to receive me. Was she still learning the job? Based on her gaze and footsteps, she looked extremely nervous. However, she was really cute, and she was probably the same year as me. Her skin was fair, and the luster of the black hair that hung behind her was...

I didn't recognize her right away, since she was wearing a kimono. 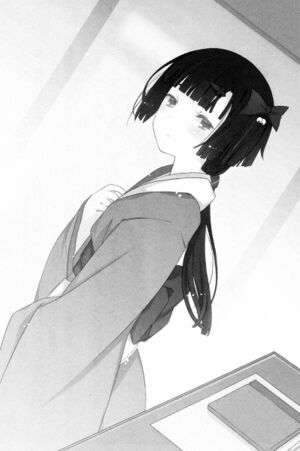 Hime also seemed to realize it was me, and her posture suddenly became motionless and rigid within a flash. I was the same. I had no idea I would run into her in this kind of place. On the bus, I had even thoroughly thought about how to ｢start the conversation｣, but now my mouth was completely frozen.

Hime was the first to recover.

"A-aah. I heard about your situation from Mana, so I wanted to talk to you."

This direct statement was the truth.

Hime lowered her head to think for a little bit, and then spoke.

"It'll be lunch break soon, so can you wait a bit for me in my room?”

Hime nodded slightly, and then explained this to the elderly lady who had been staring at me with this inconceivable expression from behind us this entire time.

"Oh my, it's Miss's friend? How impressive."

The receptionist examined me once carefully from head to toe, and then gave a pretty satisfied smile. However, I was totally engrossed in how Hime's face had blushed shyly red after being called ｢Miss｣ in front of everyone.

I was welcomed into the hotel by the receptionist, and we used the worker's entrance to go outside. We passed through the flower garden, surrounded by the back of the wall that I saw earlier from the outside. It definitely was a magnificent home that didn't lose to the hotel at all.

"Please wait here. I think it will probably be around 15 minutes before Miss will come."

After the receptionist left me in front of Hime's room, the anxious feelings suddenly resurged.

This was the first time I was entering a girl's room, apart from Chiwa's.

Also, I was the only one who was going in.

It almost felt like I was violating some unspeakable moral standard.

Option A: It could be decorated full of anime posters and action figures; the archetypical otaku's room… would a girl's room be similar to a male otaku's?

Option B: There'd be cloth decorated with magic spells or tarot cards, and there'd be decorations like crosses and so forth. ｢Black Magic Chuunibyou｣-type room. In this kind of situation, the curtains would definitely be black, and the room would be lit by candles; her parents would probably be angry about it.

Option C: Everything is pink, and it'd be a room covered with female hormones. Even though this didn't match with Hime's personality, we couldn't eliminate the possibility that her room could be decorated with different hobbies.

I held my breath as I touched the ice-cold doorknob. Then, I said, ｢Excuse me｣, as I entered the room, although I didn't know who I was talking to.

As soon as my eyes adjusted, the first thing I took in was shelves packed tightly with manga and light novels. Because it was so neatly and finely arranged by publisher or category which made it look so natural, it really made one wonder if it really was an indoor decoration.

There was the scent of paper, along with manga magazines that were never thrown away and saved. Even new issues that didn't even have the plastic wrap opened were piled together.

It was exactly the same as my room in middle school.

In comparison with the overwhelming collection of books, the small and neat desk only had a single picture frame, which contained the group photo from the summer training camp. That was a picture when the five of us from ｢Jien-Otsu｣ were all smiling together.

I remembered there was also a picture I took together with Hime and me only, but she hadn't put that one on display.

Along with a light knocking on the door, Hime entered while dressed as a female receptionist. On a tray, there was a teapot and tea cups, along with Japanese-style steamed buns.

"Was this the way of a female hotel receptionist that your older sister mentioned earlier?"

Hime looked very shy as she lowered her eyes and helped me pour tea.

As we ate the home-made hotel steamed buns as refreshments, we silently drank tea.

I was the one who came to talk, so it was definitely up to me to start the conversation, but going on like this wasn't bad at all.

Together with Hime, we slowly and peacefully drank tea.

This kind of situation was rare, since we were always surrounded by some sort of commotion.

The person who broke the silence was Hime.

"Hey, Eita, what's the difference between real and fake merchandise?"

Hime grabbed my hands and brought them to her chest over her kimono.

Despite being forced to do such a shocking thing, I somehow didn't have any dirty thoughts. As I was contemplating this, Hime's expression became increasingly earnest.

"Whenever I'm together with Eita, my heart keeps pounds like this."

Hime pressed my hand against her chest with force, as if to say her heartbeats could somehow be transmitted through.

"Is this feeling real? Or is it fake?"

I moistened my dry lips and then spoke.

"During the ｢OreDere｣ competition, President and Eita looked like an incredible couple. I thought that, ｢I can't compare at all｣. You two kissed so beautifully, yet it actually turned out to be fake. It was unexpectedly an act, but I couldn't believe it. However, if that was all a lie, and if that was all made up—"

Hime let go of my hand and gave a lonesome smile.

"Then, I'm never going to believe in love again."

Perhaps right now, Hime's circumstance was the same as Masuzu's.

She couldn't distinguish between real and fake, and was confused.

—Yes, it's absolutely true. Love is all completely a lie.

It's a kind of fever or epidemic disease. As soon as the passion retreats, a couple will immediately betray, abandon, and detest each other. In the end, only hollowness is left.

That's what I originally planned to say.

｢I never wanted to get involved in any sort of love｣. That's what I originally wanted to say.

—However, this was only the ｢twisted sentiment｣ that only Masuzu and I shared.

There was no reason to wrap Hime up in this game of anti-love people. Even if it's Hime, sooner or later she'll graduate from her chuunibyou—she'll forget about this Holy Dragon Princess of Dawn business and eventually find another person she likes.

That's why I decided to talk about something else.

"Chiwa well, towards me…… she says she loves me. She always tells me, ｢I love you｣."

"I know. I heard that Chiwawa confessed to you, Eita, but you rejected her."

That damn Chiwa, did she tell this to everyone?

"The way I currently live my life is all thanks to Chiwa. After my parents vanished, I became just like a zombie. She was the one who gave me a goal. Right now, the thing that supports me is the promise I made with Chiwa.

"Whatever you call it doesn't matter."

"Can you prove that this feeling isn't a lie?"

"To me, the only thing that's important is the promises I keep right now. It's the exactly the same with my contract to be Masuzu's fake boyfriend. It's the same as that."

"Eita's awfully cool. You're just like a real Holy Dragon Knight of Dawn."

Hime stopped in the middle of her sentence.

"When we had a meeting when Eita wasn't there, we made an agreement with each other. We were all comrades who liked Eita and we had to be cooperate with each other. Chiwawa, President, and Master all said it, you see……"

The reason for Chiwa's absurdly positive interaction with Masuzu finally made sense.

"It's because Masuzu is the kind of person who doesn't trust anyone."

I unconsciously exposed a wry smile.

"For a person like me, she trusts the least. In order to prevent me from exposing my relationship as the fake boyfriend, she's always constantly threatening me."

Hime stared straight at my eyes.

"I think that President is scared just like me. I felt that she was afraid of being discarded by you, Eita. That's why she tries to forcibly bind you."

Perhaps that was the case.

Hime saying this was the first time I ever considered it.

The explanation I had used to explain Masuzu's unsteady mood was that she could ｢no longer tell the difference real or fake｣.

This explanation was definitely true.

If there's no way for her to be a couple with me, and if this ｢terror｣ itself could make that girl get lost and disoriented.

…...How was this different from real love?

"I want to confirm if President's feelings are real."

Because of Hime's voice, I was dragged back to reality.

"However, that girl rarely speaks the truth with anyone. You never know if she'll use a lie to get past it."

"Even so, I want to believe in President. This isn't for the President. It's for myself."

Hime's hands on her thighs turned into fists as she spoke.

"That's why, I need to fight with President." 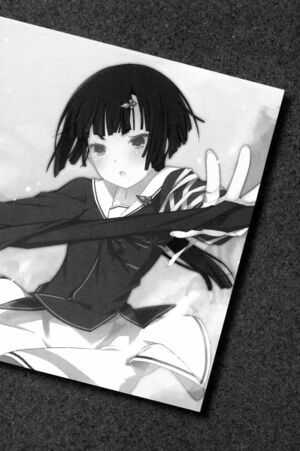