#8: Stirred Up Girlfriend's Sister Has Had Enough Mayhem[edit] 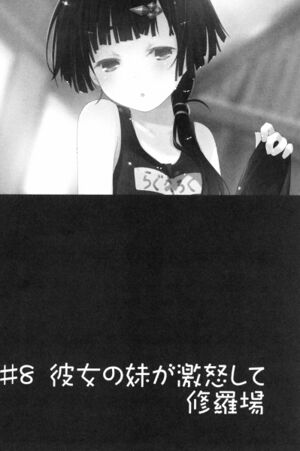 The next day around noon.

Today I went with Kaoru to eat lunch in the cafeteria because I woke up late and didn’t have enough time to make a bento. This is something that we haven’t done in a long time.

"Eita, are you not feeling well?"

Kaoru anxiously asked as I gave a huge sneeze.

"It's not a big deal. However, I'm awfully sleepy today."

Because I took some medicine this morning, I didn't feel that bad from my cold. But I kept yawning non-stop, perhaps as a side-effect of the medicine.

As we walked in the hallway leading to the cafeteria, we ran into Hime who was carrying a carton of milk and a ham sandwich and walking from the opposite end.

I waved and called out her name, but Hime looked frightened and stopped in her tracks, lowering her shoulders.

I saw how frightened she was, and felt a little hurt.

"A-Are you coming to club activities today? I'm going, so how about we go together?"

"Fuyuumi's also really worried about you, okay? It seems like the business with our school's anniversary isn't figured out yet, so Hime…"

I didn't even finish, and Hime rushed past us towards the classrooms without even picking up her head.

"That girl. I had no idea she could run so fast."

Kaoru said as he stared at the silhouette of Hime's back.

I didn't know where to put the hand that I raised, so I used it to scratch my head.

"She seems kind of fretful."

As soon as I thought about what happened at the the school gates yesterday, I could feel cold sweat.

What was Hime thinking when she saw us like that? A fake boyfriend and a fake girlfriend so fondly holding hands and walking along. Honestly speaking, I would have also been bewildered by it. Although I didn't mean it, I felt burdened as if I had deceived her for a second time.

I was sudden, but Kaoru gently patted my back.

This kind of purposeful sympathy had an incredible curing effect.

"What's with you all of a sudden?"

"If I were gay, I wouldn't need to deal with all these girl problems. My relationship with Kaoru would be even better as well, haha."

I originally meant to bring it up as a joke, but Kaoru didn't laugh.

He was just like a girl. His fair cheeks suddenly blushed red and he shyly responded:

Then Kaoru shook his head substantially.

"Never mind. Let's go. Why don't we go to the cafeteria?"

Pushing my back, Kaoru started walking.

What was he about to say before he stopped?

When school ended, Hime didn’t show up in the club room, again.

"Lately, it's been difficult to get everyone to show up."

Chiwa commented lonesomely as she looked around at all the assembled members. Even though the five of us apart from Hime were here, it still didn't feel like it was the real ｢Jien-Otsu｣.

"Fuyuumi, Hime hasn't been in touch with you?"

"How did it end up like this? I thought it was already solved, but did I do something to make Himecchi hate me?"

"You did nothing. This isn't your fault. Absolutely not."

I insisted as I tried to comfort Fuyuumi.

I also didn't know what Hime was thinking.

However, the cause of this was most likely because of Masuzu and me, since she's been strange ever since the first day of the second semester.

Masuzu was probably thinking something similar as she stood motionlessly by the window, gazing outside and seemingly thinking. 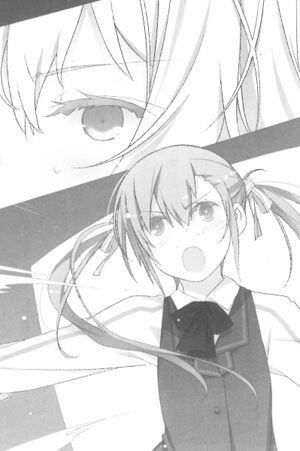 The door to the clubroom was crudely opened, and a ill-mannered blond-haired blue-eyed middle school girl entered the room.

Today she didn't have the bodyguard who was usually stuck by her side. Did she come here directly from school? She was still wearing her uniform.

"Wait a moment, why is there a student from another school here?"

Prompted by her role as a disciplinary committee member, Fuyuumi stood up. However, Mana didn't even glance at her as she walked towards her sister without the slightest misgivings.

Masuzu spoke with her gaze still turned out towards the window:

"What are you here for, Mana? I remember telling you that those who are not outstanding maidens cannot enter this room."

"Then Suzu is an outstanding maiden? Don't joke around. You made Hime cry."

Huh!? Everyone, including me, exclaimed in surprise.

Even Fuyuumi, who had never met Mana before, was equally surprised as Chiwa, who had already met her.

Masuzu finally turned her gaze towards her sister:

"I just ran into her on the way home, so I dropped her off at her house. When I asked her how she doing in the car, she didn't say a word. As soon as I asked her, ｢Did something happen?｣, she burst out crying."

Masuzu seemed to be biting back her pain with all her effort.

Even though she was trying her best to stand firm, her heels swayed and she looked as if she was about to fall over. I wanted to go hold her…… but if I did this in front of Mana, Masuzu would be exceedingly furious.

"Suzu, you're just this kind of woman. You always get everyone else caught up in your drama and make everything a total mess. When you said you wanted to return to Japan, it was the exactly the same! You suddenly announced it, and then you suddenly left. Do you know how much trouble you made for Mom?

"When you say 'Mom', you're talking about your own mother, right?"

“She's not my mother, so when you say I made trouble, what qualifications are there? I hated that person the whole time, but she some how made her way into our family nonetheless."

Some soft mumbles slipped from Chiwa. At least she could vocalize something. Fuyuumi stood there blankly with her mouth wide open, and I probably had a similar expression.

Even though I guessed that the Natsukawa family situation was very complex, I never expected it to be this this severe…...

"Hmph—so that's how you thought, huh."

"So because of that, you're entitled to trample over people’s feelings and torment others? Well, I'm a different story. Even though we're only half-sisters, we still have a blood relation. However much you hurt me, I'll hurt you the back the same. But—don't get other girls like Hime wrapped up into these things!"

Mana ferociously slammed on the table and her pigtails jumped abruptly.

Masuzu angrily glared at her sister who had a different hair color than her and spoke:

"You think you can act the role of the good guy? Mana, I heard about your famous reputation at your girl's school. I heard you have many followers, and you're called, "Her Majesty the Queen"? I'd say you've wielded the influence of the Natsukawa family name to get whatever you want."

"Yes, that's exactly right, but what's wrong about that? As soon as I say I'm a daughter of the Natsukawa family, all these girls start fawning over me. Those who have money are great. Those who have an impressive family pedigree are great. They're just girls who have this system of values, right? With that respect, I am NUMBER ONE—why is it wrong that I lead them?"

"Even so, you used money to fix Hime up. I suppose you're an expert at this?"

"If I could give her beautiful jewelry, take her to fine restaurants, bring her to high-end beauty salons, and if that would make Hime happy, I would have done anything. However, that girl isn't that sort of person. She isn't like me, she has her own world. So… so, I have no idea what I can do to make her feel better. It's impossible to rely on me for this!"

On the floor, drip after drip of teardrops stained the ground.

Tears were rolling from Mana's face, and it was soaking the floor the clubroom.

To Masuzu, this was a bigger blow than being struck or being yelled at. Her steps finally weakened, and she leaned against the wall for support.

"Be-because Hime… is the first friend I ever made."

When Mana said this, her beautiful face became a mess with the tears and snivel.

I quietly extended a handkerchief, but it was quickly flicked down with a quick retort, ｢Idiot, I don't want it!｣.

"What do you want, you disgusting otaku? Are you also involved?"

I picked up the handkerchief, and placed it on the table where Mana could easily reach it.

"Chiwa and Fuyuumi, please listen too. This time, it was all my fault. I… made a lie, and that's what made Hime like this. That's why it was never your fault."

Even though Masuzu was also an accomplice and should take responsibility as well… but for Masuzu who looked like she was just about to cry, that would’ve been too cruel.

It's the boyfriend's responsibility to protect his girlfriend.

"This Saturday, I'm going to talk with Hime. Can you please give me a little time?"

After a little bit of silence:

"I understand, Ei-kun. I won't ask any questions. Do your best."

"Although I'm a good for nothing as her Master, I'll leave it to you Ta-kun, please."

Fuyuumi spoke with a hoarse voice. It looked like she had sympathized and started getting teary after being affected by Mana's tears.

"If Hime doesn't get better after this, I'll run you over with a bicycle."

Mana angrily glared at me with a frightening expression. Could she even right a bike yet?

Masuzu used her way of speaking to shield me.

And just like that, it was determined that I would represent the ｢Outstanding Maidens｣ to meet Hime, even though I was a male.

No, because I was a male, I was the one who had to do it. 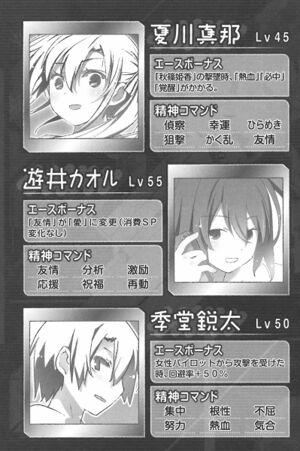 When confronted with a charging female, dodge rate +50%