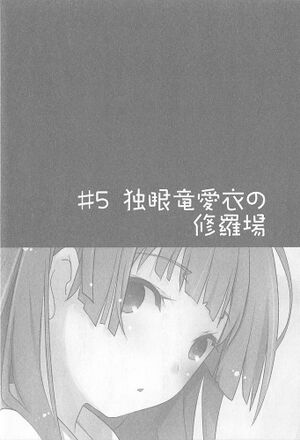 Anyone will have experiences of getting frustrated[1]

If it was the current me, I would say “Relay? That’s too troublesome, pass” or something along the lines, but during that time, I was heavily impacted.

I don’t know who set the rules, but for the lower graders, “fast runners are cool” is a value upheld by the majority. Relay runners are cool, in other words, the resulted theory was “I am cool”.

I must get back the “cool” title next year, I still remember I trained by running back and forth on the nearby river bank. Although one month later, I got into the anime reruns in evening and gave up on training.

In the end, I failed to become a runner in third grade too.

But at that time I stopped feeling bad about it. After all, “being cool because I can run very fast” itself is a theory that makes no sense. Speed is only useful when you’re running late, so if I can let go of my pride in my speed, nothing really matters anymore. Young Eita leveled up, he already surpassed himself, he is growing up.

The second semester in the first year of high school, I was frustrated again.

Looking at the returned maths exam paper, I scratched my head in frustration.

Ninety marks. Under normal circumstances, it wouldn’t be weird to see this as first place. Because Kaoru got eighty one for it, I should be much higher than the class average.

But, I wasn’t first place.

The answer sheet of the woman with a three-strand braid yawning on the seat next to me says everything.

“What are you doing? You've staring at me since quite some time ago, do you like me?”

“I wasn’t even staring at your face!”

On her answer sheet, a huge hanamaru[2] and the number “100” decorated her paper.

“How did you answer the last question?”

“Didn’t we learn this recently?”

“I’m talking about the time constraint.”

The mathematics teacher Yu Gamidani-sensei is nicknamed “Infinite Hell” for his papers. Because there are too many questions, it is almost impossible to finish the paper. He himself said “you have to answer the questions you know first, this is very important”, and he wants to train our ability in choosing the questions with a large amount of questions.

So I thought eighty percent was good enough.

Since the test results for the quiz won’t get announced, I don’t really care about other students’ results.

But I never thought someone could score full marks on it!

“Because I learnt the soroban[3], probably thanks to that.”

I learnt the soroban too, but I gave up after three days.

“Why do you care so much about such a small quiz?”

“It’s important for me.”

“Mmm, your ego is quite huge.”

“It’s not because of that—”

I can’t throw away my “meaningless pride” like what I did during the relay.

If I can’t maintain my first place position, the door to getting recommendation to medical universities will be closed to me.

Therefore, I need to study hard.

I was focusing on mathematics in the clubroom after school. Picking out the same amount of questions as the quiz from my collection of questions, calculating the required amount of time.

Facing Masuzu’s sharp voice, I didn’t raise my head, and continued my work.

“Since you came to the clubroom, why don’t you chat a bit with Harusaki-san”

Chiwa sounded surprised, and raised her head from the shoujo manga she was reading.

“It’s fine, never mind, he can say whatever he wants anytime.”

“You’re so relaxed about this, this man will marry a revision book if he can.”

“Will the wedding be held in the bookstore?”

Hime spoke up softly. Please, I won’t marry a book.

Hime blushed and lowered her head.

Uohhhhh! Hime is embarrassed at her own joke!

“You’re still your same old self, getting turned on by Akishino-san.”

Masuzu’s cold voice pulled me back to reality.

“I-I wasn’t turned on at all! I was just looking over her as a guardian!”

I won’t look at Hime this way! Only sometimes!

Now is not the time to get distracted.

If this was a real exam I'd already be done for, I need to concentrate.

When I got back to my questions, the door opened.

I knew it was Fuyuumi, so I didn’t look up. Chiwa only glanced a little.

I looked at Fuyuumi—and said the same thing.

She was wearing a shroud.

Fuyuumi Ai looked serious, she was clad in white, with an triangular bandage[4] on her head, kneeling with white socks on, while carrying a huge cross(paper) she somehow got her hands on.

This getup was the same as what she wore when she apologized to the disciplinary committee upperclassmen when Hime’s chuunibyou worsened. This time she carried an extra cross to increase the strength.

“I have to apologize to everyone.”

Fuyuumi raised her head and looked at everyone.

“I said I had a boyfriend right? Murata Michel Daigorou, do you still remember?”

Everyone nodded, including me, you are the only one who forgot about him.

“That is actually—a lie. Michel was fabricated, he’s fictional, fake! Because you said I was ‘jealous since I have no boyfriend’, I lied without giving much thoughtttttt! Ai-chan epic boast!”

“I’m sorry!” Fuyuumi knelt on the ground and apologized.

The clubroom was silent.

Since I already knew, I wasn’t surprise.

The important part is their reaction.

The first to speak up was Chihuahua-san.

“Why did you name him Michel?”

This is an unexpected punchline, it doesn’t even matter.

“Because I thought a foreigner sounds cool. So I—”

“But doesn’t adding ‘Daigorou’ ruin it?”

“Don’t insult about my father’s name!”

Next up was Hime.

She blinked a few times.

“That’s right, I have never been in a relationship with a guy before. Don’t talk about master, I am totally white belt at it. I am a woman who needs to start from wiping the floor of the dojo!”

Hime took out a piece of cloth from the closet and gave it to Fuyuumi.

Fuyuumi started cleaning the floor of the dojo while sobbing. The cross on her back was hitting against her head, which certainly looks painful.

Then, for some reason, Hime started wiping the floor with her.

“Because I a, also a white belt, so I am doing this with master.”

“Would you still call me master?”

“Master is master, you are my idol, this will not change.”

The two of them embraced each other with cloth in hand.

Chiwa was holding her handkerchief against the corner of her eye while saying “how touching”. So anything makes you cry?

Finally, it was Masuzu’s turn.

Different from the other two, she looked serious.

“You kept it a secret up till now, what made you set your heart on it?”

“Let me guess, it’s because I broke up with Eita-kun?”

“You like Eita-kun too, right? So you revealed everything about Daigorou, and want to enter the battle, is this your ulterior motive?”

“I like Kidou-kun—Takkun. Ever since ten years ago, in Wakaba Kindergarten. But when we met each other again, Takkun forgot about me, and I was sad and stubborn, so I couldn’t reveal it.”

I can feel the atmosphere that just soften tense up again through my skin.

So you finally spoke up? A-chan…….

“This type of behavior, I can’t accept it.”

“Eita-kun already has a childhood friend in Harusaki-san. Although I don’t know what happened between you two back in kindergarten, but barging in so suddenly now, it really isn’t too much to say that you have no common sense.”

“Eh?” Not just Fuyuumi, even Chiwa and Hime was surprised.

That isn’t wrong, but how did this came out from Masuzu out of everyone else.

“That’s why I gave up. Because I realized how deep their ties are.”

“Eita-kun and Harusaki-san are supposed to be lovers. This was decided long ago, because they have a lot of memories.”

“I-I also have memories with Takkun!”

I thought she would take out the “marriage registration”, but she seemed to have more dignity than I thought.

“Harusaki-san, why don’t you say something? Something like ‘Ei-kun is mine, I will never give him to you!’ or ‘Eat boric acid roach balls[5] and die vomiting you cockroach!’ or ‘Go gather wild vegetables, get caught in the wild boar traps and roll around in pain and die!’”

In contrast to the excited Masuzu-san, Chiwa didn’t seem all that enthusiastic.

“No matter what I say, Ai won’t give up, right? So I can only do what I did in the past, work hard to make Ei-kun turn around and look at me.

Ai stood up, and extended her hand towards Chiwa.

“So we are enemies now?”

Fuyuumi took the dazed Chiwa’s hand by force, and shook it.

Hime stared at both of them with her eyes shining, although I don’t really understand what she was muttering about, but I am sure she was really moved.

Ignoring the rather excited trio, Masuzu was muttering under her breath.

“Since this is what you want, I have my plans too, prepare yourself.”

“Hey, what are you planning to do?”

Although I said that, Masuzu didn’t seem to have heard it.

I would consider that a sickness. A sickness in a direction different from before.

Although she was this way back when she was my girlfriend, but even after we break up, it’s still hard to deal with her. 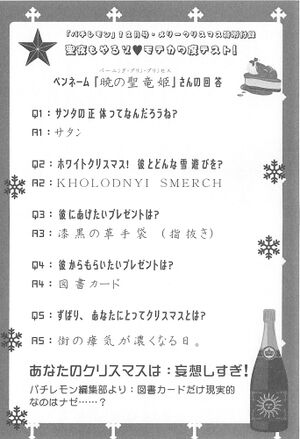 A must do even during Christmas Night ♥ Popucute Test!

Q1: What is the true form of Santa Claus?

Q2: White Christmas! How would you have fun in the snow with him?

Q3: What do you want to give to him as a present?

Q4:What do you wish to get from him?

Q5: What is Christmas to you truthfully?

A5: The day where the air pollution on the street gets worse

Your Christmas is: Too fantastical!

Pachi Lemon Editorial Board: Why is it that the only normal answer is a library card……?