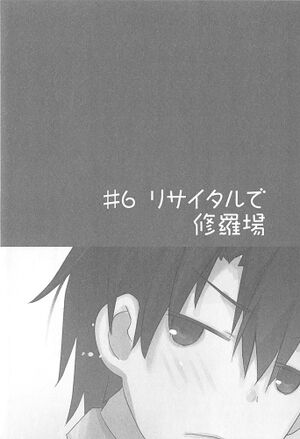 On a Sunday evening when finals are two weeks away.

After studying in the library, I wanted to go to the bookstore for some references en route home, so I walked towards the shopping street, and I met my rival.

“You don’t usually say ‘ugh’ when you meet your classmate do you, how hurtful.”

Having said that, Mogami Yura doesn’t look hurt, she only tilted her head.

She wore quite heavily, a thick brown daffle coat with a gray scarf coiling around her neck, a complete winter look. Is she afraid of the cold?

“Kidou-kun is going to karaoke too?”

“Aren’t you going to karaoke?”

I only noticed it after she said it.

I was standing beside the karaoke I went with Masuzu during the summer holidays.

“You are lying, that’s impossible.”

Mogami stared directly at my eyes.

“Kidou-kun, you look like you want to go to karaoke, I understand.”

“What expression is that?”

Mogami pointed at her own face.

Even if she said that, it’s no different from her usual “daze” expression in class.

“That’s what I planned originally, but if I’m going to sing anyway, it’s more motivating to have someone listening.”

“You don’t want to sing alone?”

“I was hoping to get someone to come with me, but everyone seemed to be busy today.”

What an unexpected turn of events.

Getting invited to karaoke by a girl who isn’t close.

What would the high school boys of the world do in this situation? Instantly agree to it?

No no, I don’t have the reason and need to.

“I’m sorry, I need to buy some reference books in the bookstore.”

“Why. With that karaoke face too?”

“No matter how you see it it’s a bookstore face.”

“Goodbye,” just as I was about to walk around her—

Her words stopped me in my tracks.

The book Mogami said was the hidden classic of English composition reference books. It’s said that just by memorizing all the sample sentences in the book, it will grant you the English knowledge to answer any form or level of question.

But the publisher went bankrupt three years ago, and the book went out of print.

Although I might stumble across it in some old bookstores, it is too expensive and I can’t set my heart on buying it.

“Plea-please lend me the book!”

Mogami pointed at the karaoke without even smiling.

“Well then, listen to this one song of mine, Mogami Yura-san’s ‘Blackmail’.”

“So you know it’s blackmailing……”

Seems that I can only stay with her for now.

For reference book, I have to go to karaoke with my rival.

What a weird situation.

The spectacular part about her singing is—

No matter what genre she sings, I can only here “Hanihaniha—”

She looks really happy. Correction, although her expression was the same, but she was twirling her arms and stamping around, seemingly excited.

After singing twenty songs solo continuously, she asked me while gasping for air.

I nodded, sipping on my coke.

Mogami was also sitting on the sofa, drinking her iced red tea, which ice had completely melted.

“Singing is great, isn’t it, I can let out all my emotions.”

“Do you have so much stress piled up?”

“Of course, I am always fighting with that monstrous study old lady.

Although I can’t imagine how this girl looks like when she’s angry.

“Because I come from a family of doctor, so I must become a doctor. Isn’t this some medieval mentality? I don’t know if they can get civilize any faster.”

Mogami said, knocking my head with the microphone. My hair isn’t even messy.[1]

I set my heart and spoke up.

“So, I want to maintain the position of the first place in our year, and at this stage, I have to do it no matter what.”

Mogami stared at my face.

“Are you talking about the recommendation for our area? The one with the scholarship.”

“Yes, the one with only one spot.”

“My mother said it’s for the best if I can get that scholarship too.”

“Because public schools are usually not as good. This is probably the aim for everyone who wants to become a doctor.” 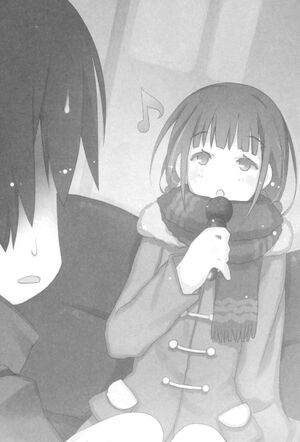 The off-key pop song from the other rooms filled our silence.

“Is it because of Chiwa?”

“Why, would you think that?”

“When Chiwa was staying in my family’s hospital, I heard there was this boy who came to visit her every day, that boy is Kidou-kun, right?”

She knew about it huh.

“But, I heard Chiwa’s body is mostly back to normal, no?”

“Mostly, is not enough.”

I mustered my strength and said.

“If she doesn’t recover completely, to the state where she can take up kendo again, it’s not enough. Not just practicing, she needs to be able to compete once more.”

“Wha-what do you mean by that?”

“She has been studying quite hard recently, didn’t you realize that?”

From first grade to nine grade, she has been scoring below average on subjects other than physical education, and now she’s studying?

“What are you talking about? This is unlike her character, she is someone who would even forget about summer holiday assignments.”

“But, didn’t her results improve recently?”

Chiwa scored quite well in the test after summer holiday.

I never pay much attention to her results in the mid-semester exams, did she improved?

“Bu-but why is she studying for? Does she want to attend a first rate university?”

“How’s that possible, that’s more ‘unlike her character’, right?”

“Then, what do you think is the cause?”

“Then, let’s listen to another song. Mogami Yura-chan’s ‘Secret’.”

Mogami stood up and started singing in Coloratura. Why is she singing without music in karaoke?

At this time, my phone vibrated in my pocket. It’s a message from Chiwa.

[Content] I have cooked your long awaited dinner for you.

Come back if you are hungry!

Chiwa is cooking for me, I wouldn’t have even thought of that before.

But this is not a bad thing.

Isn’t it a good thing if she can study or cook well?

Although that was what I thought, I can’t get rid of the slight annoyance in my heart.

Her message was so energetic, but—

As I reached home, a worn out Chiwa welcomed me at the door.

The originally white apron was dyed bright red, and her cheek was dabbed by the same red stuff.

Did she got into a bloodshed with Masuzu!? I got into a defensive posture—

“Err, that, I wanted to make omelette rice, but it failed on quite a few places.”

Usually, she would’ve laughed it away with “ehehe”.

I went to the kitchen, and there was a few plates of fried eggs there.

Every plate is either burnt, or the shape was messed up, it is hard to use these to make omelette rice.

I can’t make it spread out th—inly no matter what, ‘gurun’ and flip it over. Everything ended up ‘mushy’ or ‘battered’[2], this, like this, turn the wrist around—“

She re-enacted the scene, passion overflowing.

“Don’t care about the shape, as long as it’s edible it’s fine.”

I wanted to comfort her, but Chiwa’s voice dropped even deeper.

“I wanted Ei-kun to eat an omelette rice that is delicious and beautiful.

Chiwa is a family member to me, and I am anti-love.

“Having the thought is enough, okay, let’s eat.”

On the table were two plates of omelette rice, different in size.

Just when I put my palms together, Chiwa said, “Wait”.

She drew a heart shape on the omelette with tomato sauce.

“I wanted to do caricature like this even during the school festival, I need to tell Himecchi later.”

I wanted to tell her, “Don’t learn from those lovestruck brains!” but once I see her blushing harder than a tomato, I can’t say anything anymore.

The wooden salad bowl was filled with tomato, cabbage and lettuce. Seems that she also thought of the nutritional balance. Because Chiwa made it, the knife work was messy—nope, the cabbage is perfectly cut into strips, and the lettuce and tomatoes were cut into bite-size.

“Your cooking has really improved.”

“Saying that when you only ate the salad won’t make me happy, you know?”

This childish act of her is still the same.

“But, why did you wanted to cook today?”

Chiwa looked down, seemingly out of embarrassment.

“A few days ago, when Ai came over to cook, I didn’t feel right about that.”

“What, are you still concerned about that?”

She looked as if she didn’t care that time, but she was actually unhappy about that?

“We are neighbours after all, but I can’t do anything, I feel bad about that.”

“Are you still learning how to cook from Fuyuumi?”

“Because, she already said we are rivals.”

That’s also the case. However kind Fuyuumi is, she probably won’t do it.

“Maybe I can’t be too friendly with Ai anymore……”

“No matter how you see it this is Ei-kun’s fault right? You need to accept the fact that you are popular.”

I can’t talk back to that.

Both of us ate in silence, and just as I emptied the bowl of salad—

Our voices overlapped as we called out to each other.

“There’s no need to be polite, please go ahead.”

After repeating the dumb respect for a bit, Chiwa spoke up.

“You said you are going to the winter prep school right? I signed up for that too.”

“Although I don’t think I can enter the elite class like Ai or Ei-kun, and the time slot is different, but I think I have the need to tell you first.”

Just like what Mogami said, Chiwa seems to be studying really hard.

“How rare, you would actually attend prep school. Is it an order from aunt?”

Chiwa smiled, her mouth full from the omelette rice.

Although it is weird for me to say this, but I think there’s more to it than this. However, I have no clue why that is the case. This has never happened before. Even if we don’t have telepathy, I can always know what Chiwa is thinking. Words weren’t needed. As long as we are near each other we can understand each other perfectly.

“No-nothing, nothing at all.”

In the end I still couldn’t ask her why she started studying so hard, I feel like I don’t understand my childhood friend anymore. 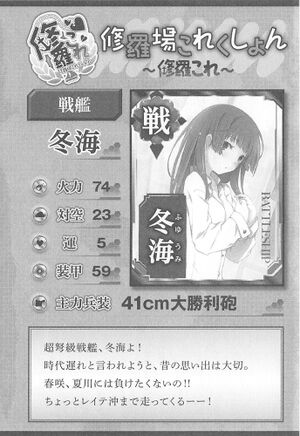 I treasure my memories, so much so that I get called behind the time.

I don’t want to lose to Harusaki and Natsukawa!