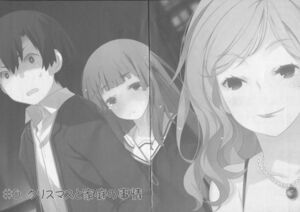 On the date when lovestruck people are filled with fluttery and airy feelings, I was carrying two worries in my chest.

The first of these was my ex-girlfriend, Natsukawa Masuzu.

Despite having broken up from our half-year fake relationship recently, she was now fully invested in "helping Harusaki-san and me get together".

It was always hard to understand that girl, but her behavior had now reached the fifth dimension. By the way, the fifth dimension is made up of the fundamental particles, "Fear", "Disgust", "Meddling in other's business", "It's a Trap", and "You're not that type of material".

The only saving grace was when Masuzu said she "wanted to be together with all of us".

Honestly speaking, when Masuzu's father told me about this, I was extremely happy...

So, for the time being, I've chosen to "be together" with Masuzu.

Although there were plenty of other problems that needed to be resolved, we were still first years in high school. Until the day when she can express her true feelings, I figured I would keep interacting with her patiently. Even though we're not dating anymore, this should be possible.

At present, there was one other worry.

She was my self-proclaimed fiancee, the extremely lovestruck type.

During winter cram school, Fuyuumi had become extremely strange. I had chased after her onto the streets and eventually confronted Fuyuumi in an argument on the pedestrian bridge.

"I'd even die for Takkun"

"I'd do anything to make you like me more than Chiwa."

I have absolutely no trust for anyone in humanity who says they'd even die for you.

However, the person who said this was Ai-chan.

To see the passionate and justice-seeking Ai-chan reach this point, it was quite a big blow for me.

I had worked so hard until today because of my commitment to Chiwa.

But like this, I can't save Ai-chan as well.

But Fuyuumi and Masuzu both seemed to think these were one in the same.

So if I helped Chiwa, I wouldn't be able to save Ai-chan——.

What could I do to unravel this tight knot on a string?

There isn't anyone I like in particular, but even if I say this, Masuzu and Fuyuumi don't believe me.

What could I possibly do——?

As I turned my head back to look, I saw someone totally unexpected standing back there.

I waved and she waved her hand as she spoke.

Her tone of speaking was just as frivolous as it was in the past. Even though she was forty years old, she still dressed like she was young. It made me rather embarrassed.

"Why did you come back here?"

I knew that my voice was trembling.

I didn't want to see her ever again, but here she was.

And furthermore laughing so carelessly as she appeared in front of me.

"Ahh well, I got tired of that guuyyy~? Also I got not money and no place to stay."

She was my mother who had disappeared a year ago.

I shifted my gaze away from my mother and took a deep breath.

Calm down, calm down.

Too many things were happening at once, and it was basically too much for me to sort through at once. I basically felt the urge to scream and run away from this place, but if I did so I'd only make everything more complicated.

Her expression looked rather astonished, kind of like she was totally naive. Well, my mother was that kind of person in the first place.

"When you said you found a lover, and father and you left home, that home effectively became my and Saeko-san's house."

"Ah, so it really did become sister-in-law's."

"Well, Yoshi-kun said, 'With Sis around, Eita will be fine.' It seems like they met a few times and figured all the details out."

Aunt Saeko was the older sister of my father, Kidou Yoshikhiko."

This was my first time hearing those words, but apparently this was an issue that had been settled a long time ago. It was probably some part of a "Secret Discussion" about my custody.

"Anyways, if you show up in front of Aunt Saeko-san, you might be torn to shreds."

She giggled as she knocked her own head.

"But she sleeps at the company a lot because she has a lot of work, right? Since that's the case, it's no big deal if you let me crash at home for a little bit."

My mother spun the ring of the house key around her finger. She actually even had the backup keys.

"Now that you mention it—isn't that Ai-chan right over there?"

Ai-chan, who had been silent this entire time, raised her head.

"Ara, so it really is the Fuyuumi's Ai-chan. You got awfully cute! You've grown a lot like your mother!"

Ai-chan hurriedly wiped away her tears and nodded her head in greetings.

"Ahhh, it brings back the memories! I remember back when Eita was in Kindergarten~ Oh yes, I have a lot of things I want to talk about with you. Want to come over to my place?"

"That's right, who in their right mind would stand out here on such a cold day chattering—hey wait, no?"

We nearly got carried away with her words and went home with her. This was one of my mother's frightening abilities.

"Mother, why did you abandon me?"

"What do you mean, abandon? That never happened. I just happened to find someone I loved more than Yoshi-kun!"

"I had no choice. It was because of love!"

"But I said—I broke up with that dude already!"

"Who cares about you! You lovestruck idiot!"

I let out such a loud shout that I even frightened myself.

"Stop messing around. Do you know how much it hurt me back then? Do you know what it feels like for a child to be abandoned like that? If Chiwa wasn't there for me back then, I don't know..."

My mother's eyes were wide.

Ai-chan was the same. Her entice was full of shock as she looked at me.

"Love is fine. Hate is fine. Attachment is fine. Infatuation is fine. But don't pretend these things are the most important things in the world. The things that people say are love only look like games to me. And these games are no better than trash because they hurt the people around them, because as soon as they're fed up with them they throw it away like trash. If you know this and still want to play, that's fine, because you can do you what you like. But don't hurt me in the process and don't flaunt it at me. Definitely don't pretend it's a beautiful, wonderful thing. There are lots more, many more, so many more things in the world that need to be cherished. For humanity's..."

My cheeks were wet.

Damn, I can't even make fun of Ai-chan anymore. I'm so embarrassed.

Ai-chan turned a deaf ear to my mother's words and ran away.

For reasons completely unknown to me, I was pulled along.

"Eita! I'll be waiting at home for you! We'll talk through this slowly later, okay?!"

I never thought that I'd run away from home on Christmas Eve...

On a lover's night, one could say this is the Gates of Hell for someone who is Anti-Love.

As we ran and ran, our final destination was Ai-chan's apartment.

Approximately one hour ago, I had visited this place because I was worried about Ai-chan.

"Why did you bring me here?"

I gasped for breath and lowered my head as I asked Ai-chan.

"...I've always felt that I've been in a mess because of my mother."

It made me a little embarrassed.

It reminded me of that day of the fireworks festival during summer vacation.

"I'm sorry, Ai-chan. It seems like I got you wrapped up in a mother-son argument. I'll leave now..."

I thought she would let go of my hand, but she kept on holding on tightly.

"Where are you going?"

Ai-chan finally lifted up her head.

There weren't any tears in her eyes anymore. Although it wasn't exactly back to normal, it looked like she had recovered some spirit.

"Where are you going back to? Your mother is waiting at home, right?"

Although I said this, I actually had no idea where I could go.

Aunt Saeko had said earlier that she had work until the year end. She had to participate in some company activities and other affairs, so she would be busier than normal. She wouldn't be home until New Year's at the earliest.

There was still six days until New Year's Day, so where should I pass the time...?

Ai-chan said this like she had seen through me.