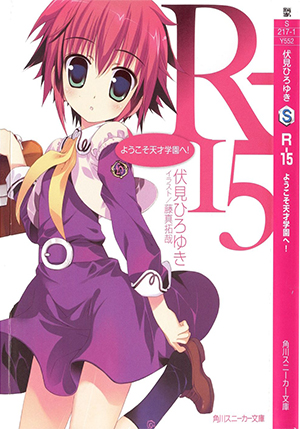 R-15 (あーるじゅうご Āru Jūgo?) is a Japanese light novel series written by Hiroyuki Fushimi and illustrated by Takuya Fujima. The first volume was published by Kadokawa Shoten in July 2009 and eight volumes have been released as of July 2011. A manga adaptation illustrated by Hayato Ōhashi started serialization in the June 2010 issue of Kadokawa Shoten's Monthly Shōnen Ace magazine. An anime TV series adaptation began airing in Japan in July 2011.

R-15 is about a boy, Taketo Akutagawa, who attends a school for geniuses: Inspiration Academy Private High School. Taketo is a genius novelist and writes erotica. Despite negative perceptions many people have of him, he aims to be at the top of his class and be recognized as the world's greatest writer.

The R-15 series by Hajime Kamoshida[edit]

Volume 1- Welcome to the Genius Academy![edit]