Difference between revisions of "Infinite Stratos" 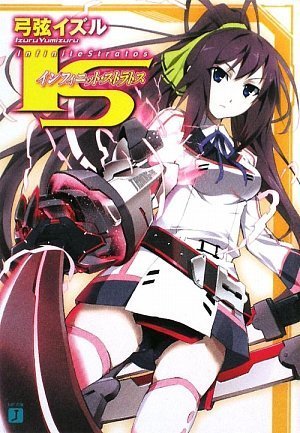 IS <Infinite Stratos> (IS〈インフィニット・ストラトス〉 IS <Infinitto Sutoratosu>?) is a Japanese light novel series by Izuru Yumizuru with illustrations provided by Okiura. As of April 2011, 7 volumes have been published by Media Factory under their MF Bunko J label. A manga adaptation by Kenji Akahoshi started serialization in the seinen manga magazine Monthly Comic Alive on May 27, 2010. An anime adaptation aired in Japan from January 6 to March 31, 2011.

In the near future, a Japanese scientist engineers a powered exoskeleton called "Infinite Stratos" (IS). Possessing technology and combat capabilities far more advanced than any other weapon system, the IS threatens to destabilize the world. Faced with such an overpowering weapon, the nations of the world enact the "Alaska Treaty", which states that IS will never be used for military combat and that existing IS technology must be equally distributed to all nations, to prevent any one nation for dominating the others. The introduction of the IS does however have a major effect on society. As IS can only be operated by women, the power balance between men and women is broken, with women coming to dominate society over men.

Ten years after the first IS were introduced, the world has entered a new age of peace. The peace is shattered, however, by an unexpected discovery. A 15 year old Japanese boy, named Ichika Orimura, is discovered to be capable of operating an IS. Realizing the potential, Ichika is forced by the Japanese government to attend the prestigious Infinite Stratos Academy, an international academy where IS pilots from all over the world are trained. Thus his busy school life surrounded by girls begins.

Please Note: Clicking on the pictures will direct you to the Infinite Stratos Wiki for further information, but beware of spoilers.

The main protagonist of the Infinite Stratos series. A normal japanese teenage boy, untill it is discovered that he can manipulate an IS which could only be used by women. This event triggered his admission into IS Academy. His is the 3rd-4th Generation IS [Byakushiki]

One of the protagonists of Infinite Stratos, a 1st year student of the IS Academy and the 1st childhood friend of Ichika. She is the 1st heroine to be introduced in the Infinite Stratos series. Doesn't have a personal IS in the beginning. But later comes into possession of the 4th Generation IS [Akatsubaki]

Another protagonist of Infinite Stratos, a 1st year student of the IS Academy and the IS Representative Cadet of England. She is the 2nd heroine to be introduced to the Infinite Stratos series. She pilots the 3rd Generation IS [Blue Tears]

A 1st year transfer student at the IS Academy and supposedly the second male capable of using an IS. IS Representative Cadet from France. Seems to harbor secrets. Uses the 2nd Generation IS [Raphael-Revive Custom II]

The most recent 1st year transfer student at the IS Academy and is the IS Representative Cadet of Germany. She was the first antagonist of the novel, before becoming an ally of Ichika. She commands the 3rd Generation IS [Schwarzer Regen]

If you would like to help translate this series, please post in the forums [1], and we will help you get started. Thank you.

The IS <Infinite Stratos> series by Izuru Yumizuru

Visit this thread for any information, comments and error reports on the PDFs.