Difference between revisions of "Kokoro Connect" 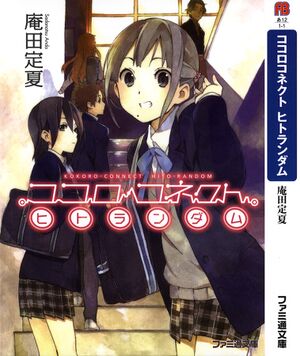 Kokoro Connect (ココロコネクト) is a Japanese light novel series written by Sadanatsu Anda, with illustrations by Shiromizakana. Anda entered the first novel in the series, originally titled Hito Tsunagari Te, Doko e Yuku (ヒトツナガリテ、ドコへユク?), into Enterbrain's 11th Entertainment Awards in 2009 and the novel won the Special Prize. As of April 2013, the series has 10 volumes (8 main volumes and 2 side-story volumes).

An ongoing manga adaptation under the same name was written by the original author and illustrated by CUTEG in October 2010. A 17-episode anime adaptation was made by Silver Link; the first 13 aired in July 2012 and the last 4 aired in December 2012. These episodes adapted the first four novels of Kokoro Connect.

The Kokoro Connect series is also available in the following languages:

The story involves five high school students, Yaegashi Taichi, Nagase Iori, Inaba Himeko, Aoki Yoshifumi and Kiriyama Yui, who are all members of the Cultural Research Club. One day, they begin experiencing a phenomenon in which they randomly swap bodies amongst themselves. As these five friends face many different phenomena at the whims of a mysterious entity known as «Heartseed», their friendship is put to the ultimate test.

There are still some Kokoro Connect volumes that have not been translated.

Anyone with decent Japanese or Chinese skills will be allowed to translate. Please note that some of the chapters are translated from the Chinese version of the novels, which are known to have some minor mistakes compared to the original Japanese text. If you have access to the originals and spot any errors, feel free to make any corrections.

If you would like to help translate this series, please post in the forums, and we will help you get started. Thank you.

All translators need to register the chapters they're working on.

All edited translations are to be in British English.

Visit the forums to give your feedback or discuss this series.

Older updates can be found on the Kokoro Connect Updates page.