Hisui, lying on the bed, murmured to himself.

He got up from the sick bed, and looked out of the window; it looked like daylight outside.

Looking over, Eruru sat on the chair by the bed, operating a notebook computer.

Looked like she was keeping Hisui company, her face was a bit pallid.

"You are AB/Rh- type, which the Blood Bank doesn't have much in storage, so she decided to donate her blood to you. The two of you are the same type."

"But...receiving a vampire's blood, you know what will happen right? It is likely you will become an undead abomination."

"True...we have considered the situation, but she refused to listen...all she wanted was to save your life. Also, [your body] shouldn't have any problems, right? In reality there is no issue?"

"Your body is interesting, your physical attributes...appears not to be something you were born with, how was it changed?"

"The scar on your chest--is that a mark from surgery? Where is your heart from?"

"Blood is source of life, so the organ that regulates blood flow is the one that controls life itself. Thus, against a vampire, striking through the heart with a stake is fatal. The source of your strength...isn't just flowing from that mysterious heart?"

"It is so mysterious. It is disappointing I could not dissect you."

Eruru whispered without any expression. To be honest, she could do something that frightening.

"I investigated that Holy Sword of yours, it seem to be a treasure. One could say it is the Bane of all Vampires. The relative who left it with you..."

"It's the Vampire who took care of me."

"Why did she give you something like this?...Is it to protect you? And about your physical attributes, is everything for your survival as a human?"

"I think I was an experiment. How could vampires coexist with humans--she always considered this question. But even when she succeeded she still died, what was the point?"

Hisui felt crushed by his guilt, balling his fists together.

"Just to save me, she didn't have to make things so complicated, all she had to do was suck my blood and turn me into a vampire. Then she could have been saved too. The so-called eternity she hated, I could have accompanied her, it would let me live with her forever."

In front of Hisui's eyes were his beloved caretaker's final moments.

Bathed in sunlight, turned into ash. In the instant he picked her up, the remaining body was scattered by the wind. No matter how tightly he held on, in the end, he held on to nothing.

Her beautiful face, dark hair, red lips, all vanished as if they never existed.

Couldn't even hold her in my arms.

"That person...didn't turn you into her race. She wanted you to be in your original state. To be human, to live as a human. Am I wrong?"

Eruru answers expressionlessly. Regarding Hisui's question, the girl did not back away from a straight answer this time.

"You are human, there are no better answers."

"But sleeping next to you is definitely an authentic vampire--a [TRUE ANCESTOR]. I heard the story from her, it appear Kishida's goal was the powers within her. If that is the case, I am afraid there will be more people targeting her in the future. Extremist factions amongst the vampires might also betray her, even so, you still want to protect her?"

"She will protect herself. Also, I can't believe her to be a [True Ancestor]. The one at my home should be the last [True Ancestor], Miraluka said so herself."

Hisui's words made Eruru's eyes glow. His body, and the vampire who made him this way, all made her very excited.

"Regarding her losing her memories, I did some investigation. Right now, there are no vampires related to her. She apparently just appeared one day, She may be the first True Ancestor in modern day society. It is so mysterious. Right now all we want to do is observe her."

"....Please be merciful. Also...why not exterminate her? Right now the sun is up, all you have to do is open the window, and she is doomed right?"

Looking at Hisui staring at her, Eruru gets up and begin to walk away.

The half vampire's face turned red and left the sickroom. At the same time, Rushella woke up.

Hisui mumbled, and Rushella flipped herself on to the bed, sitting right next to him.

"Really...no problem? It was clear you lost so much blood."

"Eh, why are you worrying so much?"

"Of course, I am worried. You are my property after all."

"You are not allowed to do anything crazy from now on. After all...you are human."

"I was able to protect the mistress, right?"

"Not allowed to die."

She spat those out, word by word. Her scarlet eyes pierced his.

"Without my permission, you are not allowed to die. Even your death belongs to me."

"But I cannot become a vampire."

"I have not given up! Someday, your body, and your soul, everything will belong to me. You will kneel before me!"

Even though he gave a perfunctory reply, but Rushella still came close with a hug, then brought her eyes to meet Hisui's.

It is not like I don't want to... that thought came unbidden. But Hisui still managed to swallow it down. One cannot just easily stop being human.

Because Rushella refused to move her gaze away, Hisui could only give her a concise and honest answer.

"I will help you, find out who you are.... investigate your past; I will definitely help."

"Also have to add my dietary requirement as well. We did agree, right?"

"....Yes yes, ah, but you have to hold your end of the bargain as well, don't suck anyone else's blood."

"I know. I... know what it is like to have your blood sucked out. I can understand."

"Also, you addressed me by name right? Even though you are a servant."

"That...that was forced by the situation."

Hisui wanted to just gloss over the situation, but Rushella did not appear to be angry, but only lightly replied: "I will give you special permission to do so."

"I will also call you Hisui, No problem?"

Watching Hisui nod in acceptance, the Vampire smiled faintly, and wrapped her arms around his neck.

"What, what are you doing?"

The two were in danger of touching each other.

But... her lips did not reach for his, but instead reached for his neck.

A lover's kiss was suppose to aim for the neck and not the lips.

"OUCH!!!! What are you doing so suddenly? I am still recovering from a great ordeal!"

"So what? I am only drinking a little bit! It was my blood anyway! I've been holding back for so long!"

Rushella licked her lips and pushed Kujou down.

Twin eyes blazed scarlet, no one could stop her anymore.

"So noisy, behave yourself!"

Resistance was futile, Hisui thus got pinned to the bed, and had his blood and pleas dissolved into oblivion.

Kujou was feeling Rushella's body and temperature as she cozied up to him, while he mumbled in tears.

After that, each day at the hospital meant at least one such take down.

After many days, Hisui was able to recover and return to school.

Reina appeared to be fine, and even returned to school before Kujou.

She could not recall her memories before being bitten, but something remained in her heart. After Hisui returned to school, she said: "....Thank you."

She looked extremely shy, and for some reason kept staring at him during class, and tried to start a conversation whenever possible.

It looked like a return to normal life but Rushella, enemy of normal everyday life, still smiled and chattered non-stop with him every day after school.

"You started a club?"

"Correct! If I can't find a club I want to join, I will just create my own club! Isn't it a great idea?"

"Sorry, don't be too proud of yourself. This is just a total whim of yours."

"Shut up and come with me."

Rushella dragged Hisui towards an empty classroom, it was the same place where Mei pushed him down.

There was always a dreadful feeling when he came here.

"I brought someone over!"

The vampire pushed the door open and dragged him in.

An emotionless voice greeted the two.

Without raising her head, the girl tapped away at the laptop. It was Eruru in a school uniform.

"What are you doing here!?"

"Club activity, what else?"

"Then what I should be saying is, why did you have to come here?"

"I am here to observe you. Because we don't have enough people on hand, to be able to maintain day to day contact, I decide to come to school. Do you have any questions?"

"Of course, there is the main question ahead. However, back up a bit, I understand your other words, but what do you mean club activity?"

"Unlike a carefree student like you, I still have work to do. To be able to create an area after school where I can focus my attention and energy, so I decide to use this club activity to be it."

This girl's thinking was clearly not simple. It was better to be alert to her dissection wishes.

Thus Kujou asked Rushella, and of course she proudly replied,

"She said as long as I don't interrupt her work, I can do whatever I want."

"Hmm, probably just to keep an eye on you. Then, why did you create this club? What is even the name of this club?"

"How bout dedicated to investigating my past, a [Servant's Club] that also completely dedicate itself to my day-to-day life!"

"How about child-birth club? Or a euphemism name like [Egg Laying Club] isn't a bad idea."

Kujou just realized Sudou was nearby. And grabbed on to his arm, even her chest pressured in.

As much as Hisui wanted to maintain the same posture, he could not dispel the fear of getting ravished any given moment, so he was unable to enjoy the soft sensation of her bosom.

"I am Rushella's collaborator. And also I receive a contract salary, so it is natural to be around her right?" 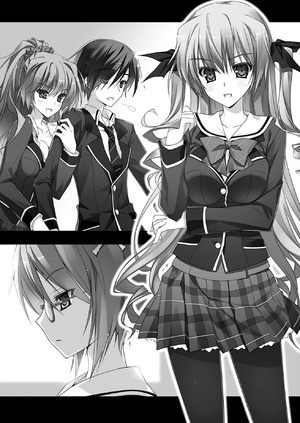 "Hi-kun doesn't have any idea? Regarding the club name?"

"Let's call it the Slacker's Club? Activities include [Abesh][3], or the After School Electromagnetic Wave Club?"[4]

"Kids these days are not going to catch your reference. Heh, clearly this is an occult research club, with four monsters here."

"Eruru worked hard so you can have a normal life right? And also accepted responsibility for the Kishida incident....thus, her department is under-staffed right now. Why can't you help her?"

Hisui pouted, and sat on a nearby chair.

"Ok, all the members are here, let's start discussing the upcoming activities!"

Mei looked as if she was watching a show.

Eruru silently pounded away at her keyboard.

And there was Kujou without a bit of motivation.

Surrounded by a vampire, an artificial human and a half vampire, the boy motionlessly mumbled,

"Come back quick, my normal life."