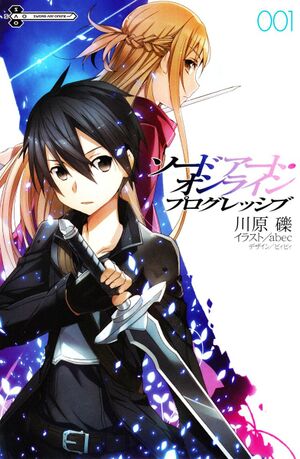 It is published by ASCII Media Works under their imprint Dengeki Bunko, and it is reboot of the SAO Aincrad Arc starting from a day or two before the clearing of the First Floor Boss, and continuing onwards.

As of January 2014, the series currently has 2 volumes.

Yen On lists first volume of Progressive for February 2015 release on distributor site.

The Sword Art Online: Progressive series is also available in the following languages:

"This game is impossible to clear. It's just a matter of when, where and how you die." Kayaba Akihiko's death game has been up for one month. This incredibly difficult VRMMO has already claimed 2000 victims. It's the day of the 1st floor boss strategy meeting. The solo player Kirito, who's decided to only strengthen himself, meets a rare female player on the current front lines, while heading to the meeting around noon. Fighting alone against the strong monsters, she was like a meteor cutting the night sky.

A compilation of Aria in the Starless Night, where Kirito becomes known as the Black Swordsman, the events concerning the 2nd floor boss clearing, and Rondo of the Transient Blade, the sad tale of a young male blacksmith.

Older updates can be found on the SAO:Progressive:Updates page.

The Material Edition (ME) series is a series of doujinshis created by Kawahara Reki himself using the pen name "Kunori Fumio" (the same pen name he used when he wrote the web novel of SAO). Material Edition 1 and 3 have no links because they are not text, they are in manga format.