Translations for this project were removed according to a DMCA request from its publisher, Kadokawa. Further action pending. 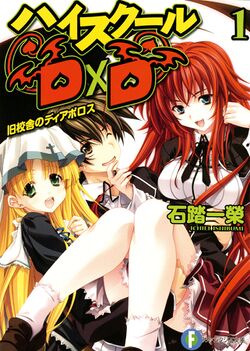 I, Hyoudou Issei, am a 2nd Year High school student and my age is equal to the number of years I haven't had a girlfriend. And, someone like me got a girlfriend! I'm sorry buddies, I will walk the path of becoming an adult before you guys! —That's how it was supposed to be, but why did I get killed by my girlfriend!?

I still haven't done anything yet! Are there no Gods in this World!?

And, the person who saved me is the most beautiful girl in my school, Rias Gremory-senpai. I learned the shocking truth from her who isn't a God but a Devil. "You have reincarnated as a Devil! Work for me!"

Lured by Senpai's breasts and treats, my life as a reincarnated Devil began.

So the "Academy×Love Comedy×Battle Fantasy” starts here with just aggressive and worldly desires!

(Note: Volume 8, Volume 13 and half of the content in Volume 15 are compilations of short stories from Dragon Magazine. The DX series is a compilation of all the other short stories to avoid interfering with the main story plot.)

Translations for this project were removed according to a DMCA request from its publisher, Kadokawa.

A continuation from where High School DxD Volume 25 left off.

These short stories may be compiled into the DX volumes in the future (Hence the reason for their low priority in terms of translation).

Inquiries about any particular volume should be directed towards the corresponding translator(s) as recorded on the Registration Page.

This is for people who deserve special thanks and are currently not on the Staff.