They had gone through hell on earth yet again.

“This couldn’t get much worse! Bloody corpses and gasoline-soaked wreckage are everywhere. Aren’t the Alps supposed to be holy ground for mineral water!? Who’s gonna want to drink the water here now!?”

“Diesel is a light oil. And wouldn’t that still be better than tap water that makes you sick?”

“The real question is what to do about our busty commander.”

“Spreading her legs and flipping her over is a must, but I want some more ideas. Anyone got any requests?”

Major Frolaytia Capistrano had apparently set this all up in secret, so a four-letter word starting with F had been in the back of their minds throughout the entire fight. Incidentally, the last letter is K, the second is U, and the third is C. The soldiers of the 37th Mobile Maintenance Battalion were unbeatable while boiling with rage like this. Each and every one of them could shirtlessly swing around a Gatling gun right now. 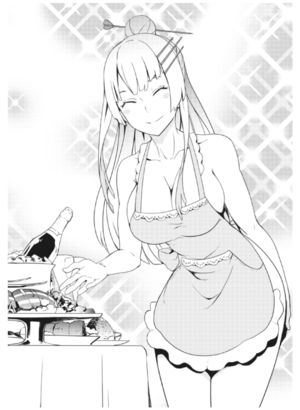 Working off one’s lust through sports apparently did not work for this dime-a-dozen box set of idiots. With them, it had only boiled the lust down into a crystalized form.

And when they arrived in the maintenance base zone, they found their silver-haired busty commander had used the “naked apron” special move and had also prepared a sumptuous feast for them.

“Welcome back, everyone!! Anyone who takes my side can eat as much as they want!!”

“No fair, you black-hearted pair of boobs! What happened to our free will here!!!???”

Anyone would choose the T&A over making a noble sacrifice.

This was set up so the potatoes would separate into a group that wanted to enjoy the bare skin and a group that insisted on a punishment. The two groups would end up fighting each other, so Frolaytia herself would emerge untouched and victorious despite having seemingly lowered her defenses to zero.

The potatoes realized Frolaytia understood all too well how the world worked, so there was no way for them to escape her grasp. Their only option was to eat the food before them and recall what it felt like to be alive. They were exhausted after all the fighting, so they wanted to gorge themselves on some carbs.

“Major Capistrano,” said Elise Montana with a quick salute. “We have extracted all the pus related to the Body File. I do not believe there is any risk of another unit pursuing you.”

“I doubt the 21st was acting alone in this. Wouldn’t some of the higher ups have been in on it?”

“Um, that’s the thing.” The strict instructor began to fidget. “It seems the title of 21st Mobile Maintenance Battalion was no more than camouflage. They were a secret unit that preserved genetic information on the royals and nobles around the world and performed R&D on medicines for the risks found in those genes. It was the 21st themselves who created the Body File.”

“Of course. They had a massive amount of research data, which had to be stored on the most secure server they could find since genetic risks are like the Achilles heel of the royals and nobles. In the worst case, someone could use that information to biologically develop a deadly virus tailored specifically for them.”

“Yes, that is why their Second Generation Crystal Scrying was so odd. It seems to have functioned as a giant medical server. That means their research cannot continue now that we have destroyed it. Assassinating us would no longer benefit the higher ups. The research has stalled, but the destruction of the Object also eliminates the risk of the Body File getting out.”

“If those people are so obsessed with their own survival, will they really accept that?”

“Do you remember the final transmission sent out by the Crystal Scrying, Major? It was not encrypted, so everyone should have picked it up.”

Frolaytia blew out a long stream of smoke. Incidentally, the long, narrow kiseru was a very poor match for a naked apron.

And she answered the question.

“Even if they still had the technology, they must have been at their limit morale-wise. And it makes sense. The royals and nobles are supposed to be an unshakable presence, but the 21st’s researchers were constantly witness to their fears and anxieties. It was the very teachings that the Legitimacy Kingdom uses to rule its people that left those Legitimacy Kingdom researchers unable to bear it any longer. It was a structural flaw. Even if they gather new personnel and start the research anew, it should fall apart at some point.”

There was no guarantee the royals or nobles would start dropping like flies due to some disease or disaster someday.

And who would survive that trial would depend on what kind of trial it was. Only those with the compatible key would survive, so at the moment the problem appeared, no one from commoner to royal would have an advantage.

But some people had refused to accept that.

That refusal was fueled by the fears and anxieties that they might be the inferior ones.

The people who had seen those fears and anxieties had felt like everything they believed in was being denied and destroyed.

“Which means it’s over,” said Frolaytia. “With no repercussions whatsoever for the royals and nobles who supported the 21st…or rather, who forced the 21st to perform that medical research.”

Their punishment was no more than a delusion.

That might seem too light, but that was also the one thing they had failed to shake free of after all this time. They feared a disease that might not even exist, so even if no one was criticizing them, they would have to live a hellish life of fear so great it turned their hair white.

Elise narrowed her eyes behind her glasses.

“Wars based on anger or pleasure never last long. The greatest driving forces are fear and anxiety. Although in most cases, that leads to an uncontrollable panic.”

“Then what will you do, Sergeant Elise?”

“Me? I am an instructor of the 7th Special Training Unit, so I can educate people in how to control themselves even when they hold great power in their hands. I am confident in my ability to teach anyone to do that.”

The strict instructor of the Special Training Unit smiled.

“But only when there is a common assumption that they will be fighting against an enemy. Whether we are talking about entrance exams, military training, or even elegant ballet or piano, I cannot educate someone when there is no competition. I cannot create a goal for them then.”

“Is there no way to improve yourself all on your own? I do hear golf is like a battle against yourself.”

“If that were really true, they would not hold tournaments. People feel excitement and are moved to emotion through intense competition with others and that is why so many people gather to participate in those tournaments. People may have once been taught how to feel satisfied on their own, but those teachings must have long been abandoned.”

All of this was just one form it took.

The 21st Mobile Maintenance Battalion had been annihilated and the research meant to relieve the royals’ anxieties had ground to a halt, but another conflict was brewing.

And whether they wanted more conflict or were trying to avoid it, if they aimed a gun toward the 37th, they would have to be destroyed.

“It’s all so fruitless.”

“Why not find a way to enjoy yourself in war? I recommend making up your own rules and aiming for a high score.”

In the end, this was how the world worked.

In this crazy age, only those who enjoyed war could survive.