They were more than 60m below ground. That was equivalent to the height of a 20-story building. Normally, leading more than 100 civilians out from there might have taken several hours. So even with the disconcerting tremors and thick cracks running through the concrete walls and ceiling, Quenser’s group could not immediately reach the surface safely.

The sheer number of hostages trapped in the train was a problem.

They had left a motorcycle and two snowmobile-like one-person vehicles further up in the tunnels, but they wouldn’t be of much use. Some of the hostages were small children and others were elderly. They had to walk even slower than usual while making sure no one fell behind due to confusion or exhaustion.

“What do we do now? We took out Bad Garage, but it didn’t fix anything. What’s going on up top? Will a photo of that guy’s corpse and a DNA sample really convince anyone of anything?”

“Yeah, and Septimontium is still out there. We’re still wanted, so we’ll be shot if we don’t have an escape route ready.”

Fortunately, the ceiling did not collapse and bury them all alive.

There was the occasional youth whose fear or panic got the better of them and tried to run off, but Putana could generally sense it coming based on their gaze. And the best solution there was to aim a gun at them. That replaced their undefined fear with a very well defined fear. Of course, that wasn’t going to earn their thanks even if it did keep them safe.

So many of the goddess statues had toppled over. Some of their heads had even come off during the fall. The tourists silently looked away, like that was hinting at their own fate.

“Wh-why did that statue fall this way? This isn’t an ordinary earthquake.”

“It’s also kind of wet and there’s a crack in the wall. Could it have been steam?” Myonri wiped sweat from her brow. “Um, and isn’t it really hot in here? D-do you hear a sizzling sound from the other side of the wall?”

“It’s all the people. Of course it’s hot with one or two hundred people packed into this tunnel.”

Heivia tried to laugh it off, but there was a tremor in his voice.

Eventually, they arrived at the tunnel’s exit without losing a single person.

But for some reason, no one ran eagerly toward the light at the exit.

Perhaps they all had a bad feeling about what they would find there.

Everything was black and orange.

The fate of Rome was laid out before their eyes.

The yelling, screaming, and crying he could understand.

But the weak laughter he heard in front of a belltower sinking and collapsing into the lava made no sense.

Something else had collapsed in that orange sea.

It was one of the round Septimontiums.

Were the sirens coming from fire trucks, ambulances, or riot police? The occasional gunfire may have been thieves taking advantage of the chaos, but it also could have been people shooting themselves in the head after seeing their home collapsing around them.

What had become of Millia Newburg?

His radio was working again now that they were out of the tunnel. That was evident from all the various civilian and military transmissions it was picking up.

Quenser Barbotage had thought they were here to save the city.

Today had been hell, but they had done their job. Maybe they would be accused of wrongdoing, but they had taken on a great burden and ensured everyone’s safety for the time being.

But his radio told an entirely different story.

“Dammit, it’s really started. The Faith Organization is so panicked they’ve lost sight of the big picture. They’ve officially submitted a declaration of war against the Legitimacy Kingdom. They claim it’s retaliation for losing their home country because we refused to share our intelligence with them, but they’re the ones who refused to cooperate! They’re gonna try and do the same to us out of revenge. They won’t stop until Paris is engulfed in flames!!”

“Do they not even care who was behind the attack? I’m not dying because they’re too mad to think straight, dammit!!”

“Hey, did you see those lights falling from the sky? Our frontline base was obliterated 5 seconds after their declaration of war. That means they launched them before the declaration, which violates so many international treaties!!”

“Listen up, everyone!! The Faith Organization has put together a largescale ground attack unit full of attack helicopters and tanks and it’s headed this way. The Alps will be our defensive line. If they get past here, they have a straight shot at our home country of Paris!! The intelligence division will erase your hard disks back home. Brave Legitimacy Kingdom soldiers like us are not going to let the enemy’s bullets reach Paris’s innocent civilians before they reach us. Remember your daily lessons and training. We will stop them even if it means lining up as a great shield of flesh and blood!!”

“The Capitalist Corporations and Information Alliance are on the move too. They keep shooting down our satellites. Are they trying to position themselves on the winning side so they can steal some of our land!? Like taking a big spoonful of pudding from the world map!?”

“Our Tsar Fleet will defend the Mediterranean with our lives. Everyone else please withdraw, receive permission to send in an Object, and construct an impregnable naval defense line. Do not waste the time we are giving you. …Okay, men!! It’s hunting time!! Let’s show that Faith Organization naval Object what it means to pick a fight with sailors!!!!!”

The reports were either requesting assistance or resigned to their fate.

So many lives had been lost before this.

But Quenser Barbotage began to realize that maybe the wars he had fought hadn’t been all that bad.

He could only stand there in a daze.

Hadn’t the four world powers been colluding with each other?

Then he really wished they would work together to bring an end to this chaos. But he knew it was too late for that. Their power balance had been like a table with four legs. If one of them broke, the entire table collapsed. The four legs couldn’t come together as one anymore. With all four legs intact, they had been able to speak in secret and plot to profit equally from the state of the world, but now the Faith Organization’s home country had been destroyed. They weren’t just going to take one for the team after that.

They were going to muster all of their forces to take out the other legs.

That was the new world they lived in now. 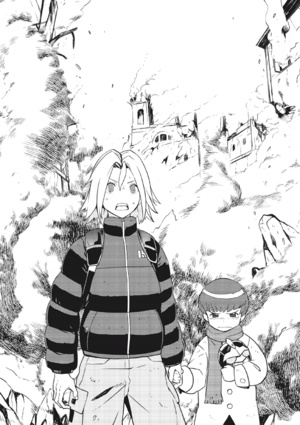 The nameless young man from Bad Garage had struck back at the world for destroying his village with Objects. The 6 or 7 billion people out there were now at the mercy of a dead man.

There was only one word for it.

“It’s finally started. This isn’t the usual clean wars. No one’s even trying to pretend anymore. The four world powers aren’t going to stop until they have truly burned each other to the ground, bringing down the rest of the world with them. This is a true world war.”

Another hand squeezed at Quenser’s.

It belonged to the small boy he had saved earlier.

Could he still live up to that title?

He needed to lay out everything he had and every skill he possessed and come up with an answer.

This was a world war.

What could Quenser Barbotage realistically do in a hell that burned so hot it seemed to redefine the very meaning of right and wrong?