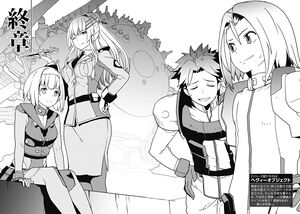 All wars are determined by the colossal weapons known as Objects that can withstand nuclear weapons. But two stupid delinquent soldiers run around with explosives and rifles to overturn that established rule!! …And they seem rather carefree about it.

At an unknown time and in an unknown place, Waltraute confronted a certain god: Light God Baldr.

“Lady Frigg is wondering if you will return to Asgard.”

“Mother, hm? No, it would be best if she spent some time away from her son. After all, it only took seeing my death in a dream for her to call in every object, phenomenon, and life form and yell at them to never harm me.”

Invulnerable Baldr could deflect any attack, but that was why. It made him look like he had a mother complex or an overly-protective mother, so he could not exactly brag about the skill.

“And if I had resurrected myself there, I would have needed to use the boy as a stepping stone. The god of light will not ascend to heaven by abandoning a human seeking salvation. That’s the kind of god I want to be.”

“I suppose I should thank you for that. Normally, a human who stabbed his own throat would never come back to life.”

“I need to thank him. It was undoubtedly his actions that allowed me to remember my position as god of light.”

“Is that why you’re doing this?”

“Well, I’m sure Niflheim will become something else entirely now that is has been cleansed of human sin, but if Odin doesn’t change his ways, the underworld will quickly fill back up with human souls sent there for false sins. …Someone will need to monitor Hel’s progress. And that got me to thinking. The god of light…no, light itself is meant to illuminate the darkness. There was nothing for me to do in Asgard which is already full of light. I’ve found somewhere I want to shine my light on, so I won’t return until I’ve saved Niflheim.”

Waltraute maintained her usual sour look and did not smile, but her attitude did soften.

“I still can’t believe that boy took his own life to pass between worlds and talk directly with a god.”

“I agree with you there. I need to give him a talking to later. Whatever the reason, I can’t let him glorify the act of suicide.”

Kamijou and the others gathered back on the Divine Ship Skíðblaðnir.

The Hel ordeal was over and they had a way back home.

“Now that it’s over, it all feels too short.”

Heivia reluctantly looked back to the land.

“We never did run across a long-eared elf bathing, did we? Well, a lot happened and we almost died, but it wasn’t a bad vacation.”

“Agreed,” said Quenser, sounding exhausted. “But that last person who was summoned was something else. I never want to run across someone like that again. It isn’t normal to make the Princess dizzy when she’s inside her Object.”

Jinnai Shinobu was running around trying to escape the Yuki Onna.

“Heh heh heh. Eh heh heh heh heh. I know you feel like you missed out. You were lonely frozen all on your own, weren’t you? So this time, I’ll freeze both of us together. That way, I’ll never, eeeever let you feel lonely again.”

“No! Nooo!! Have your traits as a Youkai been strengthened because we’re in some fantasy world!? And why is being a yandere a trait of your entire species!?”

Incidentally, the leaf swimsuit Zashiki Warashi showed no sign of helping the resident of her house. She was staring off into the distance but not because she was reminiscing. She was only thinking about how she could eat normal bread and soba again soon.

“Sigh. So our adventure with the Absurd is finally at its end.”

“By the way, bunny girl, will you be okay when we get back? Weren’t you already-…”

“Not to worry. Some things are just meant to happen in life. …And let me warn you that you should never let your guard down and assume I’ve completely vanished from the world.”

Nanajou Kyouichirou and Satsuki were having a conversation of their own.

“Y’know, I think I’d rather stay here forever if the alternative is going back to that world filled with killers.”

“While this world doesn’t have very many killers, it does seem to have a lot of war and famine. Maybe they all have to work so hard to survive that they don’t have time for intelligent bloodlust.”

Kamijou paid careful attention to where he put his right hand so as not to negate it by accident.

“Well, I’m glad this isn’t going to leave a bad taste in our mouths. That alone I can agree with.”

“There’s a lot I’m still curious about, but it may be better for both worlds if I don’t bring back the knowledge here.”

“I’m more curious about how much time will have passed when we get back. It’s been a week. A whole week. Do you think maybe time will revert to when we vanished?”

Seeing them off from the land were Waltraute on her white horse, the boy sitting in front of her, and Hel on Níðhöggr.

Kamijou waved to them.

The change continued and the scenery before them blurred. Or perhaps it was their existence that was fading.

This was the end.

Everything was breaking apart around them, but Kamijou Touma’s voice still got through strangely clear.

“See you again somewhere and sometime.”

With a flash, several lights scattered in several directions and surpassed the boundaries of that world.