But they could not forget one fundamental fact.

The pointy-haired boy could not be blamed for feeling woozy. Nothing would change that he had been stabbed in the side by Maidono Hoshimi. Misaka Imouto had roughly sewn him up, but the wound was still there. Plus, he had fought back-to-back battles against Maidono and Neoka and been slashed by glass and metal shards all across his body. Kamijou Touma was definitely headed to the hospital this Christmas Eve. He could only hope he would not be there long.

“I doubt there is anything more you can do for him here,” dryly said Othinus from his shoulder. However, she did know how to support her understander boy. “But you too must play a role in creating an Academy City he will accept. The city will not change if the person at the top calls for change. The rest of the people need to respond to that call or that person will simply be isolated up there.”

Anti-Skill must have given up on climbing the long, long stairway. They belatedly rushed in on a large tiltrotor craft, so Kamijou’s group left Neoka Norito, his doctor, and his helicopter pilot in Anti-Skill’s care while they made their way back to the ground level. It was a 70-story building and none of the elevators were working, so it would have felt like being stranded in the middle of the city if not for Misaka Mikoto’s magnetic power.

“There weren’t this many people here before.”

“Isn’t that because it’s Christmas Eve?”

Kamijou Touma was bloody, had run around throwing punches, and still did not know if he was being held back or not, so when he was thrown out into the frozen city night, his hopes for a romantic night had finally dropped to devastating levels, but then he saw something.

He saw a small miracle.

“What’s with you?” asked Mikoto.

He forgot all about the pain in his side as he parted the crowd to chase someone’s back and circle around in front of them.

It was indeed that old chef.

When asked if the ramen was made with chicken or seafood, he would answer “I dunno. Some kinda chemicals?” right in front of the customers. But he had sold a small serving of ramen the size of a rice bowl for the students headed home from school. Kamijou had thought the old man’s shop had been lost to the strange onslaught of donut shops, but here he was. Academy City’s soul was not dead yet!!

The old man wore a headband even on Christmas Eve and he pointed like a used car dealer.

Kamijou was bloody as could be, but that old man reacted the same as ever.

He was a true man who never strayed from the path he had made for himself.

“Whatever form it takes, I need a shop to do business, but I can’t stand to push around a cart in this cold. I was thinking of moving up to a food truck next. I hope I can get started again before the New Year.”

“Ohhhhhh!! It’s really you. Only you would have such a messed-up sense of standards!! I so missed this complete lack of tact where you serve customers food made in a food truck so cheap I can only imagine every past owner ended up dead under mysterious circumstances! This is the rich kind of afterschool snack that those fad donuts could never provide!!”

Kamijou was as bloody and fired up as a pro wrestler after a fight outside the ring, so he failed to notice the girls he had left behind staring at him with their mouths forming small triangles.

After the old man said he was planning to use an app-based delivery service since hiring a delivery boy was too expensive, Kamijou waved goodbye and left him to his business. He had finally found some good news. Now he only ever had to tap his phone’s screen to eat that chemical-laden ramen that seemed even more artificial than plastic. He could not believe the kinds of insanity the dawn had in store for him. The ramen that man served was dangerous enough when you could carefully watch him make it, so who knows what would end up in the bowl when the entire transaction was handled remotely? This was sounding like Russian Roulette Lite or something!

His hopes and expectations were running wild.

Kamijou smiled brightly while watching that departing old man who was not dyed by any of the bright Christmas colors of this decorated city full of happy couples.

What an excellent sight for the end of the year.

“Let’s make sure next year is a good one,” he said without really thinking.

“Do I need to remind you that it’s currently Christmas Eve?” asked Mikoto. “Did you just get caught in some kind of temporal anomaly or something?”

Anyway, the many people out here did not seem to care about the recent commotion. There were friends, siblings, and couples walking and smiling together to form a strange crowd in this city of colorful lights.

They had not resolved the most fundamental issue.

“That dealt with Neoka, but there is still that outside group he was working with,” said Othinus from his shoulder. “R&C Occultics, a giant IT company that has crawled its way into all sorts of industries using fortunetelling and good luck charms. The world is developing in yet another odd direction.”

Data could spread to any part of the world using the internet.

This crowd here might look happy, but no one could be certain of that. Plenty of boys and girls here were messing with their phones. While they looked like they were smiling together in good cheer, what exactly was displayed on those screens? It could come from simple curiosity, or it could be fueled by a serious complex, but after accessing the website for a mysterious company and learning of the existence of a different form of the supernatural, who would actually try to use it? The seeds had already been sown, so the dormant threat was only going to grow. It was unlikely this problem could be solved solely by Academy City and the science side. Nor could it be solved solely by the magic side magicians outside the city.

This enemy was clearly aiming for the gap between them.

A failure to cooperate would mean time lost and R&C Occultics’s influence would be growing all the while. Until they eventually reached a point where you could not get rid of them even if you wanted to, like air conditioning or cellphones.

When looking at the entire world population, espers were a minority.

They had been a powerful minority who everyone had envied.

What if everyone in the world could now use magic?

What if it spread to the point that it need not be hidden and everyone accepted it as normal?

Espers could not use magic.

Those who could not use magic would gradually decline as a weak minority.

Was using that as a reason to fight back really and truly the right thing to do?

What if a new age arrived and that desperate resistance became judged as an evil action?

(If that really is their aim, then they’ve found one hell of a way to turn things around.)

Their enemy was a complete mystery.

They did not even need to cross Academy City’s wall and sneak in.

They could create an endless supply of powerful foes just by sharing information.

“It’s snowing.” Index looked up with the cat in her arms. “It’s really snowing! We’re going to have a white Christmas, Touma!!”

There was an unseen threat out there, but they had dealt with everything within arm’s reach. So couldn’t they forget all about it and bask in their victory for one day at least? If they never stopped worrying, their spirits would break before the next enemy even showed up. So couldn’t they enjoy themselves on Christmas?

But just as he started thinking that way…

He heard a little girl humming.

And he recognized the voice.

He looked back without thinking and a look of utter displeasure appeared on his face. This was the sticky(?) little girl who he had found behind the convenience store last night and ended up carrying around while chased by delinquents. Even in the frigid night, she was still not wearing any real clothes. One of her hands did hold a thin red cloth up to her smooth chest to barely cover herself, but he could not tell if that was an article of clothing or a bed sheet.

However, Index, Misaka Mikoto, and Othinus were here.

This was more than a case of “Danger: Do not mix!”

The little girl’s eyes had perfectly locked onto him. And her gaze was filled with the negative joy of someone who had spotted a possible source of entertainment!!

She definitely spoke while looking right at him.

“Please no! I haven’t reached a save point yet!! Beat me up here and I won’t be able to recover!!”

He put up his defenses before anyone could do anything, but she did not care. She slipped through the crowd with shocking ease and moved right up to the trembling boy.

She held a phone in her hand.

It was the same one she had held when they first met.

And she was clearly operating it in some way with her small fingertip.

“Just a quick update to the homepage. Sorry about talking about work like this.”

“R&C Occultics. It has reached the point of a trend, but I still need to directly look after it until it really gets on track.”

Needless to say, she was not reacting to the negative little girl’s state of undress.

“Get away from her, human!! She is like me in a way!! Except she has deviated from being a Magic God to become-!!”

None of it mattered.

The little girl placed her index finger to her lips.

Everyone recognized that gesture of silence, but how many people in the modern age knew it had its origins in an ancient Egyptian ritual?

She grinned and spoke with her finger still on her lips.

“Does my apparent age bother you? I have not taken this pitiful form of my own free will, I assure you. Doing that is such a pain, but this is a special day, so perhaps I should make the effort.”

She toyed with something in her small hand.

It was colored too sinister a black to call a large piece of hard candy.

So it was better called a pill.

A change came over her.

She was a beautiful woman boldly showing off her curvy figure, she was an alluring woman with her long strawberry blonde hair worn in what looked like flat fried shrimps, and she was a witch who had adorned herself with rose symbols. 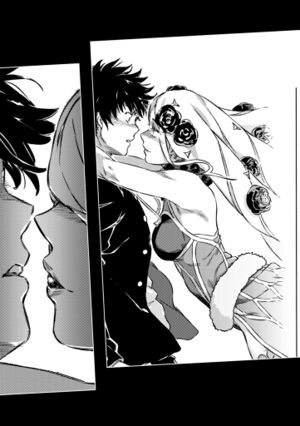 “Anna Sprengel!! I had heard of you, but I never thought you existed in a physical form!”

Even that god shouted in disbelief of what she was seeing.

That legendary magician was a high-ranking member of the ancient magic cabal known as the Rose and she had given permission to found the Golden cabal, said to be the world’s largest. She had not even glanced at the position of Magic God, which was said to be the final objective of all magicians. Right now, she draped her arms around the neck of the boy right in front of her.

Everyone was watching as she made an obvious declaration of war with that black pill in her mouth.

“Merry Christmas, my amnesiac enemy. You looked good out there today.”

Her lips met his.

And a pill-flavored attack pierced to the depths of Kamijou Touma’s brain.