Toaru Majutsu no Index:Virtual On Preface

What is Cyber Troopers Virtual-On?[edit] 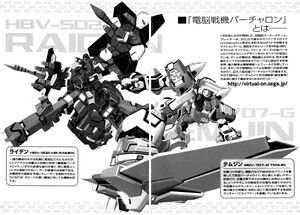 A legendary arcade game released by Sega in 1995. An action game in which the player fought using giant robots known as Virtuaroids that were drawn in 3DCG. The series has 4 games in total (Original, Oratorio Tangram, Force, Marz) and all of the Virtuaroids’ mech designs were done by Katoki Hajime. The games take place in a future world known as the Virtual Century where giant global corporations rule everything from infrastructure to politics. The struggle for power has shifted to the field of cyberspace, but the desire for real war in the physical world has not died out and the giant humanoid weapons known as Virtuaroids were born. Ultimately, an age of Limited War begins where the Virtuaroids are used for proxy wars. http://virtual-on.sega.jp/

A multipurpose Virtuaroid with a focus on overall balance between offense, defense, and mobility. Easy to use for beginners, but can fight on equal or greater footing to any other Virtuaroid when used with the proper skill. Obliterates the opponent’s attacks with a sword or bombs while aiming for damage with a launcher at midrange. Its greatest feature is Sleipnir, a multiuse launcher that transforms to match its current purpose.

Of all the Virtuaroids, this was the very first to be implemented, but it also has top-class offense and defense. All of its weapons are powerful and the lasers fired from its shoulder units are especially destructive. If it can predict its opponent’s path and fire its lasers there, it can maintain an advantage over faster units. 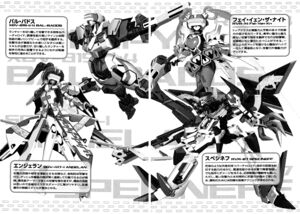 Covers for its low defense with top-class mobility and speed. If its swift speed and endless attacks can run circles around its opponent, it can maintain an advantage in a shooting battle or a close-range battle. After taking a certain amount of damage, it enters hyper mode and turns gold, increasing its offense and defense.

A Virtuaroid with a grim reaper-like appearance. In addition to the ability to seal away its opponent’s weapons, its penetrating attacks can do damage even through obstacles. It also has high mobility in close-range battles. However, its high offensive power is combined with extremely low defensive power, so precise dodging technique is needed to win.

A special Virtuaroid that can separate its launcher and attack. It can pummel its opponent with highly seeking mines and highly negating ring beams. Its complex attack method requires a lot of skill to use it well, but if it can place its separated launcher in its opponent’s blind spot, it can gain a great advantage in battle.

Uses irregular attacks such as summoning an ice dragon or light bullets that freeze its opponent. It can continue moving without a gap after a dash attack. Its high-quality armor can deflect many attacks, but the unit itself is not very sturdy and small mistakes can lead to major damage. A combat style focused on dodging is needed. 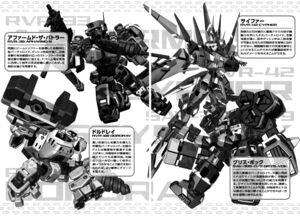 A Virtuaroid that trades defense for top-class midair mobility. It has high offensive ability and can attack twice during a midair dash, so it will not let its opponent approach easily. If its charge attack hits in its fighter plane form, it can do major damage even to a heavyweight opponent.

A Virtuaroid specialized for hand-to-hand combat with beam tonfas equipped on both arms. It has excellent dashing ability and a wide effective range for its close-range attacks, so it can actively aim for direct attacks with its tonfas. If it can use napalm and other weapons to effectively keep its opponent close, it demonstrates overwhelming strength.

An assault Virtuaroid with high defense and offense. The drill on its left arm can penetrate obstacles, allowing it to attack its opponent even if they are hiding behind an obstacle. If it can separate the claw on its right arm to hold its opponent in place, it can aim for more reliable damage.

What is the Cyber Troopers Virtual-On as a Next Generation Game?[edit]

A fighting game played using giant Virtuaroids that appear in the actual city streets. Whether a Level 5 or Level 0, anyone can fight equally as long as they have the proper technique, so it has explosively spread throughout the students of Academy City. Even when fighting in the streets, stray shots will not blow away buildings and the giant weapons will not crush passersby. The latest portable devices that have recently taken Academy City by storm are used to represent the battles. There are two ways to defeat an opponent in Next Generation Game Virtual-On. The first is to score more points than your opponent by the end of the game. The second is to destroy every member of the opposing team. Preliminary matches are being held in each of Academy City’s districts and then a tournament will be held between representatives of all 23 districts. Victory there will make one the strongest player in both name and reality.

The game ends when one side wins two of three sets. But unlike a normal fighting game, the primary goal is not to wear down a gauge representing stamina or armor. More like judo or wrestling, the points earned from “legal blows” determine the winner (i.e. it is a form of e-sports). Virtual-On is generally won by scoring more points in two of the three sets, but KOs are also possible. And if every Virtuaroid on a team is destroyed, that team is defeated and the game ends.

A handheld device used to play Virtual-On. In addition to the game, the device also supports one’s everyday life. Kamijou originally played Virtual-On to refill his electronic credits on the portable device.

Virtuaroids do not actually exist there; they fight as materialized data. The V-Converter acts as the core of that system. The V-Disc inside is something like the blueprints for the Virtuaroid, so the V-Disc is read to materialize the Virtuaroid.

A substance that accumulated in great quantities at the lunar ruins known as the Moon Gate in another world. Crushing it and applying it evenly to a giant disc creates a V-Disc, so it is the core ingredient of the V-Converter.

Next Generation Game Virtual-On is generally played on a portable device, but a lot of users play by enclosing themselves in egg-shaped cradle stations installed at the centers located around Academy City. They provide a higher resolution image and slightly less latency (although the portable device is still used as the controller even inside the cradle). The difference is similar to enjoying the same video on a handheld player versus a home theater system.

The Support AI that automatically activates when a user privately registers their portable device. A single AI is stored on each device. They primarily share information about Virtual-On and provide support during battle. They seem to have a high-level learning function, so their personality is different for every user.

A service that allows a target material’s traits and properties to be incorporated into a Virtuaroid just by holding the device in front of an object. This works with both mechanical and biological objects, so the structures of existing weapons or of insects and other animals can be incorporated. This extremely high level of customization is one aspect of Virtual-On.

A blue Cypher Virtuaroid. Uses a coloring not found in the defaults and its user name is corrupted. An outlaw player that intrudes on proper battles and destroys everything. Given its nickname, it seems to be pursuing someone…

A rumored feature(?) of Virtual-On in Academy City. As a Next Generation Game, Virtual-On allows users to adjust their Virtuaroid’s parameters using the Material Analyze feature, but the Reverse Convert can supposedly go the other way and transfer the customized Virtuaroid’s data to the player. However, there are many mysteries concerning how the Material Analyze applies altered effects to the Virtuaroid and some rumors claim these effects can reach the actual human body piloting the Virtuaroid…

An underground online search engine in Academy City. It allows one to search for information not normally available, but this search engine is a crucible of malice and it will destroy the personality of any normal person who stays there for too long.

According to information from another dimension, it is a Space-Time Continuum Control Mechanism that can be called “the entity at the center of all things” and that is “a single entity that also simultaneously has alibis in every single parallel world”. Successfully contacting it provides control of time, causality, destiny, and all else that is similarly beyond reach, so it places the world in the palm of your hand.

The girl who develops and manages all cutting-edge technology. Also the creator of the Tangram