Difference between revisions of "Mahouka Koukou no Rettousei" 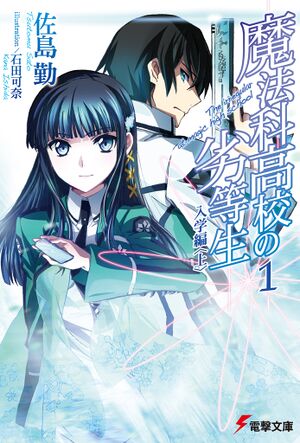 Mahouka Koukou no Rettousei (魔法科高校の劣等生), literally "The Poor Performing Student of a Magic High School", and also known officially as "The Irregular at Magic High School", is a Japanese light novel series written by Satou Tsutomu (佐島勤), with illustrations by Ishida Kana (石田可奈), published by ASCII Media Works under their Dengeki Bunko label. The novel began as a web novel serialization in "Let's Become a Novelist" on October 12, 2008. It then became the second web novel after "Sword Art Online", to be commercialized and published by Dengeki in July 2011. An animé adaptation by Madhouse Studios was announced on October 6, 2013, and the anime is currently airing as of April 5, 2014.

Mahouka Koukou no Rettousei is also available in the following languages:

As of July 2011, the web novel has received over 30 million page views.

As of December 2011, the web novel has received over 50 million page views.

The web novel, including the Gaiden (side stories), have been taken down at the end of 2011.

The Dengeki published volumes were edited, supplemented with more text on some occasions, and overall improved over the web versions.

Volume 5 will include a special chapter that has never been released on the web.

This series debuted in "This Light Novel is Amazing 2012" rankings at the rank of 29.

Is a product of neither legends nor fairy tales, but instead has become a technology of reality since a time unknown to people.

Magic Technicians (in short, Magicians) are nurtured through Magic High Schools and Universities.

This is a story about:

After both siblings entered a Magic High School,

The stage of daily turbulence was unveiled——.

Those who wish to contribute are asked to first notify a supervisor beforehand via the forum.

Every Chapter (after editing) must conform to the format guidelines and maintain the same terminology used. Editors are to check the standard if possible. Both translators and editors are required to participate actively in the forum in project standards.

Discuss this series in the forums

If you find any part of the translation weird or doesn't completely make sense, tell us in the Translation Check Thread

If you appreciate the Translator's effort, thank them in the Staff Appreciation Thread

The Mahouka Koukou no Rettousei series by Satou Tsutomu

You can find the E-book version of the volumes here.

Ninendo started appearing in Dengeki Bunko MAGAZINE (starting in Volume 28) before being published in a collected novel form. Tatsuya, Miyuki and their friends are now in their Sophomore year.