Thank you for the excellent ratings for the 'Hidan no Aria' anime! I am Akamatsu.

However, during scenes such as changing clothes, a luminous Unidentified Mysterious Animal (UMA) known as “Skyfish” flew just in front of the camera. This caused the good scenes to be blurred…

Actually, the anime will have a Blu-ray version and a DVD version!

In these versions, those “Skyfish” have been driven away by the UMA hunting team of the SSR, making the pictures look very clear!

Please purchase these discs and watch those cute and handsome scenes and activate your Hysteria Mode. Then, you can recall those scenes! This is how you can become a true Aria fan!

And to those people who proclaim that they are already Aria fans,

From its appearance, it looks like a clichéd work of mischievous girls…

But after all, the setting is set in Butei High. The contents do not just include fighting, melee or shooting, it also has scenes of girls possessing supernatural powers. It is a manga with basic Aria-type scenes.

The story is interrelated with the current light novels, so characters like Aria and Kinji will appear. You can also find character backgrounds that never made their way into the light novels.

In the production team, Kobuichi-sensei will be responsible for character design, Tachibana Shogako-sensei, who is awesome at fighting and beauty scenes, will take charge of the illustrations, while the plot will be written by me.

These works are currently being serialized in Young GANGAN, hence people who are waiting for new volumes of the light novels can read the manga in the meantime. Ah~ this makes me feel so happy!

Other than the light novels and the anime, there are still many other interesting works that are expanding the Aria universe.

Those readers who haven’t gotten the AA experience, be sure to read it to explore the Aria universe…

At the same time, if you find that the tenth volume is not enough for you, please wait for the next volume!

Here, I shall give you a hint – something big is going to happen to Kinji!

Congratulations on the release of the tenth volume!

The girl on the cover page is Shirayuki.

This is my first time drawing her with a M60, it really took a lot of hard work.

If I can use my diligence to make it look very nice, that would be really good.

A new character has appeared in the series, people really can’t take their eyes off her!

For the anime, it should stop airing by the time this volume gets published. It’s very interesting to watch the characters in the action-packed anime. 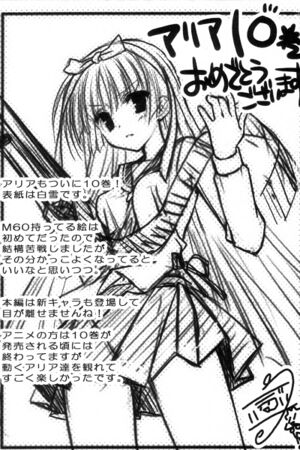