Epilogue: Go for the Next!! The War Meeting -Bandire-[edit]

From then on, for a while, the days which flowed by were so peaceful it felt like a dream.

Aria, who had the tendency to skip school, went to school as normal, and it seemed that she was teaching a first year girl that was based in the Butei High system, Amico. Thanks to that, I could stretch my wings for a short while, and my transfer application to a normal school was too--alright, I had submitted it to Masters.

If it went well, my transfer would be in April of next year.

Which high school I would go to, I had not decided yet, but at the same time as my graduation to a third year, I will transfer.

Doing that...after school on the day I had taken another step towards the self who was a "normal high school student", a small incident occurred.

After staying at Informa, where shoes were forbidden, to go to my information class, opening my shoelocker to go home--

Above my shoes, there was a letter.

The letter was inserted into a pure-white letter, and like in the movies, akin to how foreign wealthy people sealed their letters, it was sealed with red wax seal.

"--Hey, hey!? I haven't seen anything like that except for the shoujo manga that my sister has, you know!"

When we were going home together, Logi's Muto suddenly grabbed my head from the right.

"Ahhh...just as I was wondering whether things were going well between you and Kanzaki-san, it's already this."

Shiranui, on my left, was smiling wryly with his handsome face.

"...what the hell's 'anything like that' and 'this'? It's just that Jeanne gave me a letter, right? But, she's so old fashioned. A letter in modern times. If she wants to contact me, it's fine if she just gives me a mail."

I complained, and Muto and Shiranui looked at each other--

"You know. Mails have no romance or magical fairy tales in them, so that's why it's a letter. That's a love letter. I have the patience of a samurai, and I'll keep quiet about it so show me."

Saying that, certainty about it being a love letter coming from my left and right, they tried to snatch my letter from me.

No matter what the contents are, showing a letter from someone to somebody else is forbidden. As a human being.

Thinking that, I performed the Tohyama family's secret legacy move, the headbutt, on Muto, knocking him out, and as I was going to bring about the same result in Shiranui, he escaped from Informa.

Getting on the round-trip bus which had just arrived, I opened the letter on my seat--uu. English...no, French. And it was also written in the same flowing, cursive script.

She writes really well. Despite the fact that she can't draw.

Rather, I can't possibly read this, right? It's in French, and it's so tightly written.

As I thought that, at the end was a note in Japanese.

"I do not believe that you can read this, so I wrote it in Japanese on the back."

Then, write it in Japanese from the beginning!

The instructed time was--tomorrow, or rather, tonight.

As I was suspicious, after I got off the bus I immediately called Jeanne...

"Jeanne, why did you use a letter? Thanks to that, we have to bury Muto."

"That is a formal letter--because, it is an invitation. You are a boy, so come properly."

Just saying that, without explaining in further detail, Jeanne hung up.

Calling her again, she did not pick up.

How should I say this...it seemed that, if she had said it properly, she thought I probably wouldn't come.

This is getting more and more suspicious.

I wasn't very interested, but pulled in by Jeanne's behaviour, I--

Because Muto...refused me, I managed to get a miniature 2 horsepower motorboat which did not need a license from Muto's sister, who, like him, was in Logi.

With that, at midnight, I crossed over from Academy Island to the southern tip of Empty Island. Just in case, with my gun.

Climbing the rusty stairs, the surface of the artificial island was--

-on top of being dark, wrapped in mist.

On the left and right of my unclear vision, windmill poles continued from west to east at regular intervals.

For some reason, it was an ominous scene.

Looking as if I was pushing through the mist, I...walked until I was below the slanted windmill. Nicknamed as slanted windmill in Butei High, which I had crashed a plane into in April.

The wreckage of that plane had been dismantled and disposed of, and the area around here had returned to its former emptiness, but...enveloping this area, this mist...somehow, makes me feel uneasy.

It felt as if this mist had not occurred naturally.

Somewhere, it seemed that I had been enveloped by the same mist before...that's right. At IU, when I had fought with Sherlock Holmes, he had, in the name of "preparatory classes", covered me with a mist like this.

Turning towards the shouted voice--

At a location slightly distant from me, wearing platinum armor, Jeanne stood there.

Magic Blade - Durandal's tip pierced straight into the ground, standing there like a cane, and the hilt was clasped by two hands at the pommel, the hands placed on top of each other.

"What is it. Calling me out to a place like this at night."

Saying something that Aria had said to me a little earlier, I approached Jeanne--

Her western armor was more heavily equipped than when we had once fought her in the underground warehouse. In addition to the cuirass and greaves, she was even wearing a skirt-like fold and curved gauntlets.

On her graceful face, there was a sense of urgency. What had happened?

Because from above, a familiar voice rang out, I turned my face upwards--

On the unmoving windmill's propellers, Reki, in her uniform, was sitting.

Looking closer, the Dragunov sniper rifle which was forever slung over her shoulder was cradled in front of her.

Here too--it had not reached a level of readiness for battle, but the atmosphere too was quite alert.

As I was frowning.

As if encircling the slanted windmill in a large circle, multiple strong lights flashed into being.

Covering my eyes with my arm from the glare, I...once again, looked around me.

In the mist, illuminated by the light, other than us, there were several other--figures.

Those shapes were, all, without an exception, abnormal.

Indescribable with any other words, that ominous bunch was gathered in an area around 50 meters in radius.

Like that, with everyone standing apart, it was like a group of cosplayers at a cosplay competition, but...I instinctively understood that this was not that kind of playful event. Even if it's this slow, normal me.

In my mind, the faces of IU we had fought with before flashed through one by one.

And whichever one of these it was, they were all in the category of strange people, monsters and demons. Not just people.

If I thought about it, I could be killed by the touch of a finger. Right now. Right here.

Even if I were in Hysteria Mode, I have no chance of victory. They were those kinds of people.

As if, I was being surrounded by several Kanas and Sherlocks, that kind of feeling of danger.

"--It seems that, a few days ago, OurRanban's Koko sisters have caused quite a lot of trouble. My deepest apologies."

Respectfully apologizing to us was a man whose eyes were so thin they were akin to slits.

On the ground slightly distant from him--ZZzzzz...a black shadow wriggled.

Strange. That shadow is strange. Although there's nothing above it, even though the shadow is the only thing there, it moved. A scene out of a nightmare.

I thought that the shadow had assembled and become a human--and it rose from the ground.

"So you are the boy who, along with Lupin the 4th, defeated my father. Unbelievable."

This was different from Riko's sweet lolita...with white and black as a basis, her whole body clothed with a gothic lolita costume, the shadow became a girl with golden twin-tails. Despite the fact that it was night, her white hand was holding a frilly parasol, and on her back was something like a bat--large wings grew there.

As if showing off that those wings were real, with one flap, behind it--

-a strange sound rang out from inside another person's body.

Within the faces gathered here, it was the biggest. A giant that was 3 meters tall. Its whole body was enveloped in modern armor, it was carrying a Gatling gun, and its shoulders were even equipped with a linked rocket launcher. It was like a bipedal tank. Rather, is it a human? I don't even know that.

Next to it, body clothed in glamorous, white vestments, a nun carrying a large sword which looked like a cross and--with a pitch black hood, a large peaked cap, on her shoulders a raven which seemed to have been out of a picture, a tiny witch, and they were glaring at each other with droopy eyes and up-slanted eyes.

"We will not wage war, that of Tohyama. Still not tonight. I too am very excited because this is my first grand battle in 86 years."

For some reason, talking in a manner as if she knew about me, the person who said that was--

Wearing blue Japanese clothing with Sanskrit characters written on it, a girl even shorter than Aria.

The corners of her sharp eyes long, they seemed to be that of a Japanese person, her long hair was a dark golden colour, rather, golden brown.

The thing to rub one's eyes at was, on her head there were two...cat-like, no, fox-like ears standing up straight. Seeing it twitch, it did not seem to be just a decoration.

Others in the area were, a handsome white man wearing a trenchcoat and carrying a longsword, wearing a one-piece which seemed to be made out of a tabby-like feline's fur, a cave-man-like girl, and listening to music from earphones and swaying his body to it, an ugly-looking pierro....various types of strange people had gathered here.

And, at the edge of my vision, Sparkle, Sparkle--gold sand danced--

From the direction of the mist, two figures became visible.

Wearing clothes which exposed her body, one of the girls was--aah, her...!

"Hohoho. Tohyama Kinji, it's been a while."

And--wielding Scorpio, dyed navy blue, waving at me with a "Hellooo" kind of feeling...

Long bulletproof coat, high-laced boots----that was Kana's battle outfit from when she was a Butei.

Rather, Kana...this isn't the time for "Heellooo", right? That's like a family member who has arrived to observe the class.

With a face which was twisted with agony, I looked around again--

Sweat oozing from my forehead, I wiped it with the back of my hand.

I just want to become a normal person.

Just the measly, boring high school student of that wish.

And being here, I too--am the same as them, being decided as an "abnormal" human being? 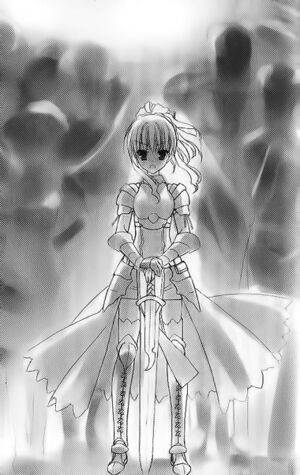 Ice blue eyes looking around at all that were present, Jeanne...

Like a chairman, spoke out in a cold voice.

"Then, let us begin. Ambassadors of the agencies, societies, and organizations from all around the world. BandireOur council of declaration of war--After IU's collapse, the things we seek, taking them, fighting for them, scrambling over them, our world --Go For The Next!!!For the sake of advancing to the next step!!"

Towards the people, each of them crying out, I, my eyes half-desperate, turned.

Go, Go, Go--I planned on finishing up on everything. How naive.

Apparently, as for becoming a normal male high school student--

It seems that, still, many "Go"s exist that I have to cross. Apparently.