Many thanks to all who have gotten themselves a copy of the riotous modern day fantasy novel of the trio who have travelled to another world —<Mondaiji-Tachi ga Isekai kara kuru Soudesu yo?>.

Just this April, it was the third anniversary of this Mondaiji series. I had originally feared that the series would be cut off midway. However now that I think about it, I shouldn’t be that worried after all. Even if it were to be rejected, I would be perplexed but would have hoped to finish it gradually anyways.

Furthermore, the serialization of <Comp-Ace>, the manga by Rio Nanamomo has come to a close. Thank you for your hard work for half a year of serialization!

It is still two volumes away from the predicted end of the first arc of the Mondaiji series.

In the next volume, in the last part of the Alliance Flag arc and the Azi Dahaka arc— <Strike! Faster than Starlight!>, please continue to roll in the comments and support.

Izayoi will also be on the front page of the next volume! 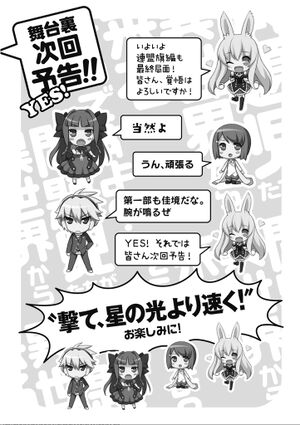 Kuro Usagi: “It’s finally the final part of the Alliance Flag arc! Everyone, have you steeled your resolves?!”

Izayoi: “The first arc is also moving towards its climax. I can barely wait.”

KuroUsagi: “YES! Then, let’s all do the volume notice together!”

All four of them: “Please look forward to <Strike! Faster than Starlight!>”