Everyone, it’s been a while. I would like to thank everyone who has read my modern Parallel World Fantasy novel《Mondaiji-tachi ga isekai kara kuru soudesu yo? Flag of the Ouroboros Alliance》.

Regarding the cover art this time, I’ve received an unfortunate notification from Amano-sensei.

……That’s right. Just like that. I had asked about it before, but the forthright reply really caused me to be unable to say anything besides an ‘OK’. It sure is quite unbecoming but let’s continue to pray for his continued hard work!

Due to this cover art, I could only use Percher as the female lead for this volume.

Readers who are unsatisfied with how the antics of Izayoi and Kuro Usagi have been reduced, if you need to hate someone, please hate the people who have chosen the cover art to be Percher---the publisher and Amano-sensei who exposed her Inner. And not me.

I will just do a little advertising below.

《Mondaiji-tachi ga isekai kara kuru soudesu yo? 》 actually got the green light to be produced as an animation!

And it will be starting from January onwards! In other words, it will be just next month!

Talking about this, the animation artists who had worked with me had worriedly asked: “Is your schedule okay?”, but with the efforts of the Staff, the lifelike animations have been completed.

During the course of its production, I had actually held the belief that this was a work that can never be replicated in the form of visual effects. Hence, I was really touched and thankful when I saw how smooth it progressed in the media group where they split the work into many sections to be worked on by different individuals.

Regarding the two magazines that have the works of Nanamomo-sensei and Sakano-sensei, the first issue is up for publishing soon, readers who are interested in mangas, please show your support.

Regarding Volume 6 of the Mondaiji-series, I guess that everyone’s already starting to understand the rules of this world. About the other separate mysteries that I’ve wanted to bring up much later, I’ve decided to bring it forward due to some “Adult matters”*cough cough*.

This volume has much less on fighting and mystery solving but this sort of situation will be put to an end at this volume.

The next volume on the Alliance Flag arc will be a full blown battle. 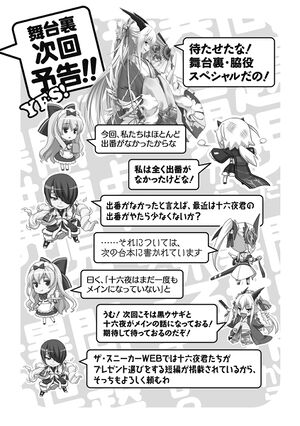 BACKSTAGE notice of what is COMING SOON!! YES!

Shiroyasha: Sorry for the wait, everyone! This back stage will be a special one for side-characters!

Leticia: We weren’t given any roles to play this time.

Shiroyasha: I haven’t had any air time at all!

Kouryuu: Talking about roles, Izayoi’s role has been decreased significantly to be point of being pathetic right?

Faceless: ……The next volume will be talking about this.

Leticia: Some say that: “Izayoi has never been the main character.”

Shiroyasha: Nn! The main cast for the next story will be Kuro Usagi and Izayoi! Please wait for us with much eagerness!

Kouryuu: The Sneaker WEB has published the short story about Izayoi and the others picking a present, so I will count on you guys for that side too.

The black note: Volume seven is set to be published next Spring!