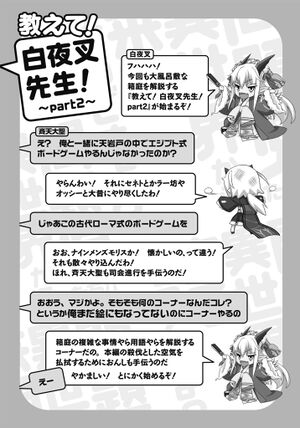 Shiroyasha[1]: “HngHahaha! It’s time for me to begin the explanations of this confusing world of Little Garden in this [Please Teach me! Shiroyasha-Sensei! ~Part 2~] section once again.

Great Sage Equalling Heaven: “Aye? Weren’t you going to play the Egyptian board game with me at Ama-no-Iwato?

Shiroyasha: “Play? Play your head, oh sheesh! Moreover, I’ve already played Senet with that lad, Ra and Osiris to the point of being sick of it!”

Great Sage Equalling Heaven: “Then let’s play this Roman board game instead.”

Shiroyasha: “Ooh, it’s Nine Men Morris, right?! That sure brings back memories, Oi, no, I’m also done playing with that! Hey, Great Sage Equalling Heaven should also come help with the hosting too!”

Shiroyasha: “This is a special column to explain all the confusing stuff in the world of Little Garden. And to do away with the intense murderous atmosphere of this volume, you should come and help out! Anyways, let’s start!” 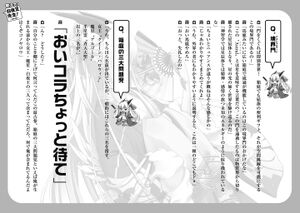 Shiro: “Anyone who passes through it will be in another world! It is also one of the few convenient Gifts within the world of Little Garden. And that is the Astral Gate which allows spatial teleportation!”

Sage: “The ability to maintain communications and trade within the vast world of Little Garden is all thanks to these Astral Gates.”

Shiro: “The word “Astral” is a word that refers to the “stars”. Using this gate, an object of the material plane would be converted into an astral body to be transported across the distance in the form of starlight.”

Sage: “Within the concepts of mythologies, astral bodies are what we refer to as the unknown power emitted from our willpower and emotions.”

Sage: “Then, I will leave it to you to summarize it in a simpler way.”

Shiro: Mhm. If you want to make it simpler for others to understand, it is a sort of willfulness—eg. me.”

Shiro: “Mhm. Although it was mentioned here and there, but it usually refers to these three people.

Sage: “It’s totally not related to me and yet my name is mentioned? What talking you, you elderly being. Talking about the three big problem children, it has always been Queen, Demon Star and ShiroYoruOu you three. It was ever since I was born too. How would I be in the trio. Are you trying to make me cry, you bastard?”

Shiro: “HngHngHng. That’s already an old story. After I was appointed to be a [FloorMaster] 200 years ago, the name of Shiroyasha=Justice has long spread across the lands!” 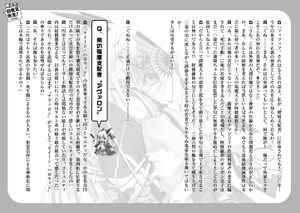 Sage: “Wuu…. Mah, even if we were to step back a hundred times from there, why would I be the candidate? I’m also quite a famous god known for doing good deeds. Probably.”

Shiro: “Mhm. This should be said to be seen as problem children from the viewpoint of the gods rather than that of the other world human’s perspective. Mah, and considering your deeds, it is only natural right? Among them are those who are still spiteful for the destruction that you wreaked in the six levels of Hell. For example, the Ashuras and Enmaten[2] of the 12 Adityas.”

Sage: “That, That’s not my fault! Um Enmaten that old fogey must have been tricked by some evil companions to write my name into the [Death Pocket] and that is how it all started. Moreover, the self-proclaimed royalty of the Asura race kidnapped the then 10 year old Karyou-imouto and wanted to do this and that!”

Shiro: “But it’s still too much to shave off all the hair and beard of Enmaten and make him huddle on the ground naked right?! And it’s the same for the prince of the Asura’s[3]! To tie up all the three heads and six arms before throwing him into the Sanzu River while throwing a banquet, mah, even the young people of today would not do such vulgar and crazy stuff!

Please reflect upon your own actions!”

Sage: “Wuuu…. Although those are the facts, I’m still unable to accept it……!”

Shiro: “The knights’ Community directly under the command of the [Queen Halloween]’s Flag. It is an organization that inherited the Name and Gifts of the Knights of the Round Table. Numbered within the four digits, it was a strong holder of the [Floor Master] position. It’s really a pity that we have lost such a Community.”

Sage: “Although they are the Round Table Knights, these knights are not related to the story of King Arthur. And their Community’s structure is more complex. The feeling I get from them on my last visit was that they are some sort of Celtic knight organization.”

Shiro: “Mhm. If we were to explain it, we would first need to explain why [Avalon] is a Community under the [Queen Halloween] Flag.”

Sage: “Aah, I would like to know about that as well.”

Shiro: “This has something to do with the cosmology of the Celtic race and their perspective of life and death. Do you remember the explanation on the deriving of Divinity through ancestral worship in the earlier part of the series?” 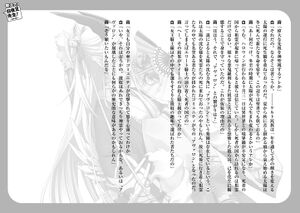 Sage: “You mean the worshipping of a great ancestor as a God?”

Shiro: “Yes, that’s it. If you remember that, then I will just cut straight to the subsequent explanation— the Celts have embedded the trajectory of which the sun traces through the skies onto the concept of life and death. When summer gives way to autumn, the weakening sun will die off in winter and be reborn as a new life. This is very similar to what is written in the Bible.”

Sage: “Ah, so it came about from that. The death of the Sun in winter and its subsequent rebirth?”

Shiro: “There’s speculation that a playground called [Avalon] is situated at the location where the Sun sets. This theory is that the concept of the sun setting have been superimposed on the rebirth of the heroic spirits who were dead. Hence, inviting the heroic ancestor spirits, who have made their names during their lifetime, to join the Community when they are dead—is the current [Avalon]. In other words, it is the country of the dead that the heroic knights gather at.”

Sage: “Hei—-. In the end, they have become the knights under the Queen’s jurisdiction?”

Shiro: “The Queen’s knights are people whom she have selected with qualities that match her liking after a thorough assessment.”

Sage: “Then Queen would be really angry about the attack on the Community that was under her very Flag, won’t she?”

Shiro: “No, that may not be so. That fellow isn’t a proper god per say. Or we can take it that the destruction of [Avalon] might not have any effect on history as well.”[4]