“Wuah~…… They are surprisingly lively even during the times that Kuro Usagi did not know of.”

Kuro Usagi, who had just read the activity logs of the [Underwood] saga, exclaimed in admiration as she nibbled at the cake which was her tea snack.

“But, the perpetual motion mechanism…… to actually use an unorthodox style to complete one of the [Last Trials of Humanity (Last Embryo)]. It sure is a really frightening talent.”

“Aiya, you are completely right on that!”

Doink! A petite figure fell from above. It is not known where she had appeared from but the small girl who had appeared, leapt into Kuro Usagi’s chest.

Perking her Usagimimi in surprise, Kuro Usagi was given a fright by the sudden change in the situation.

“Shiro, Shiroyasha-sama?! Why did you return to your appearance of a small child?!”

“Hmph Hmph, a celestial class spirit has no actual body. It was just the side effect of having returned the Divinity and getting back my own spiritual power that caused me to become my larger self. If I want to, I can also transform myself into a baby, a beautiful girl or even a high school girl as well.”

A Shiroyasha in her child form and Kuro Usagi who was too unenergetic to give a proper reply.

While groping Kuro Usagi’s chest, Shiroyasha seated herself onto the table, where she was whacked twice and thrice, before picking up the report.

“The Perpetual motion mechanism, Coppelia. Although it has been missing for hundreds of years…… we never thought that it would be sealed by the ‘Winds of Decadence’. It’s no wonder that we have not been able to find a lead on its whereabouts.”

“YES. I initially thought that it might have followed in the footsteps of the other ‘Last Trials of Humanity’ and fallen to become a Demon Lord.”

“Mhm. But it sure is good to have this sort of ending rather than that kind of development that you mentioned. If she really did fall to be a Demon Lord, she would be the newest threat alongside ‘The Closed-off World (Dystopia)’, ‘Absolute Evil (Aži Dakāha)’ and ‘Winds of Decadence (End Emptiness)’. That is something we must absolutely avoid.”

They then exchanged a special look with each other. The titles that Shiroyasha had just mentioned as examples of the Demon Lord kinds were all feared as the Ancient Demon Lords. To be mentioned as a threat on par to any of them would be more than just another object in the pool. The coincidental meeting of Izayoi’s gang with the ‘Winds of Decadence’ was one that possessed the potential for a huge catastrophe if they had even a slight misstep. The title of the strongest God Killer isn’t just another nickname.

If there exists people who can resist them in the low levels, that would mean—

“……Shiroyasha-sama, do you really need to go back to the upper levels no matter what?”

“Mhm. This is something that is already decided. Although I may look like a highly dependable visually stunning bishoujo currently, “The heavens also dictate (I’m)” to be a corner of the “Last Trials of Humanity”. If I’m not residing in a fixed location, it might just mess up the existing Celestial laws.”

“Bu, But…… if Shiroyasha-sama isn’t here to provide protection, would the lower levels still continue to survive?”

Her Usagimimi bending down, she continued to hug her chest in unease.

It goes to say that Shiroyasha’s protection was just that sort of overwhelming importance.

It is all thanks to this absolutely strong Ancient Demon Lord’s might that allowed the East Side to pass its days with stability in the region. To have this mighty protective umbrella leaving their side, would they be enough to protect the peace? That was something that Kuro Usagi couldn’t help worrying about.

Sensing the unease in Kuro Usagi, Shiroyasha pulled her hand as she walked over to the balcony.

Pointing at the setting sun, Shiroyasha used an unprecedented serious tone to speak of her teachings.

“Listen well, Kuro Usagi. Look at that patch of yellow hues of the evening. Just like there is no day when the Sun does not set, there is nothing in this world that exists eternally. Regarding that point, the “White Night (me)” also works the same way. Even I have lost thrice in my eternal life span. Even I was forced to make an agreement for the sun to set every day.” 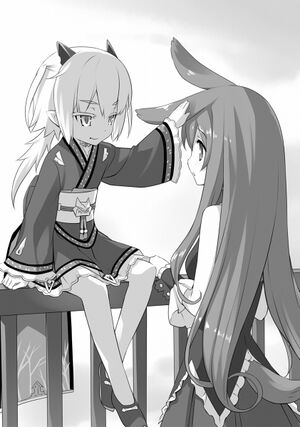 “The first defeat, gave rise to the division of Day and Night in the world. The second defeat gave a distinctive division of the Sun’s three sectors. …… The third defeat was inevitable. Even “The heavens also dictate (my)” spiritual power was to be ravaged. Oh my, I’m just sorry that it has to be that way.”

Staring at the setting sun, while suppressing her giggles. Shiroyasha, who sat on the rails of the balcony, reached out her hand to gently stroke Kuro Usagi’s Usagimimi.

The Sun’s protection isn’t eternal. But the things that exist from the care of such a Gift. —-That would be you guys of [No Name], KuroUsagi.”

“Fufu. Although I might say that, the seeds that I’ve sown isn’t just limited to you guys! [Salamandra], [Dragon Greif] and the Alliance of [Onii-Hime]. In addition to the [Great Sage of Maelstroms] who will be newly appointed to office of the East Side! If we were to add the up and coming [No Name], the peace of the lower levels could be said to be as stable as Mt. Tai! So, just be rest assured!”

Shiroyasha flicked open her fan as she laughed loudly.

Holding Kuro Usagi’s hand, they gradually floated up to fly to a height that allowed them a clear view of the entire [No Name] territory before giving a nod with a laugh.

“When an unprecedented enemy appears, just unite your strengths at that time. The path that you guys have walked will then become the truest Gift. As long as it retains its true radiance, it should become the strongest weapon capable of piercing through Demon Lords.”

“Mhm. There is no other threat as unreasonable as that to the Demon Lords. To possess a courage and unbending will in great numbers, it is going to be a power that is very frightening. This is a promise that I can give to you, as a person who has experienced it, so that should be correct without a doubt.”

Kuro Usagi was uneasy no more as she quietly listened to Shiroyasha’s teachings.

“YES! For that moment, Kuro Usagi will work hard to conquer the Communities of the East North and South with [No Name]!”

“Mhm, that’s the spirit! Then, I guess it is almost time for us to go to the farewell gathering!”

“YES! The time is just right for us to go to the farewell plaza”

—below? Saying up to that point, she suddenly felt a chill run up her back.

Reconfirming her body condition, Kuro Usagi gazed down at the centre of the plaza for the farewell gathering.

The people who have come to say their farewells to Shiroyasha had packed the streets and the crowd snaked in all directions as far as her eye could see.

“This is the last party that I, Shiroyasha have hosted! From this moment onwards, let’s start the seven day and night free to eat and play party! Are you ready, Kuro Usagi?!”

“Wait— Give Kuro Usagi a moment!”

“Wait a moment! Are we going down? Are we really going down there?!! At least let Kuro Usagi go down by herself”

Shiroyasha released her hand and the desperate cries of Kuro Usagi echoed in the farewell plaza.

—-Just as Shiroyasha had announced, the party continued for the entire span of seven days and seven nights. Communities of all sizes have gathered for the last farewell and all felt sorry for this parting.

While giving thanks to every Community for their troubles and contributions, Shiroyasha also gave them the same words that she told to Kuro Usagi.

—Gather your flags and unite as one.

That is the only weapon capable of defeating the threat of one who vows not to tolerate the existence of his enemy. Leaving that piece of advice behind, the strongest guardian had taken her leave.