The [Astral Gate] started to emit an amber light as the activating sequence was started up and the doors began to swing outwards.

This Gift that was bestowed to the Outer Gates is the one and only way for people to travel around the wide expanse of ground that made up the world of Little Garden. Hence it was an important Gift that required the protection of the respective [Region Master]s and [Floor Master] of the Outer Gate.

And Kouryuu, being the [Floor Master] Daihyo[1] for the East Side, had to check the safety and workability of the [Astral Gate]s today.

Kouryuu, with the female shop assistant following behind him, had a look of weariness as he slouched his shoulders.

“We……We have finally reached the last Outer Gate to be inspected. Isn’t it a little too much to have a schedule of inspecting five thousand in a week?”

“Kouryuu-sama, what are you talking about now?! With Shiroyasha-sama’s act of stepping down from the position, all the ghosts and evil Rakshasas who have shown some self-restrain due to their fear have now started to be active once more! Don’t you remember that we have had to defeat numerous villains and demonic spirits in just this week alone—?!”

The female clerk started to launch into her preachings upon hearing Kouryuu’s grumble. But her words were very true for many pressing matters began springing up everywhere after Kouryuu's assumption of office to serve as the Master.

A single band of thieves led by a fallen [Skand][2] who became a plague.

An [Evil spirit of Smallpox] haunting the rural Communities.

Last and not least there was also [Herpes Kamui][3] who started to attack after obtaining Divinity.

……Though the reason was unknown, they were all God class spirits of the ‘God of Plague’ classification. With exception to [Skand], the others were only of the level of folk myth Gods who were pretty much powerless. Their spiritual power could be described as a God of Nature[4] of sorts after having leveled up their spiritual power from that of an evil spirit to a God-class. And that would have been no different from the level of Shirayuki-hime’s spiritual power.

Although these were just a disorganized bunch of rebels that weren’t enough to be a workout for Saurian Demon King, he who had always been addressed by the intimidating title of the [Great Sage who Devastate Seas], the continuous and relentless skirmishes would still drain him physically and mentally eventually.

Kouryuu scratched his head while giving a smile that seemed to have a hidden meaning:

“Anyways, let’s end the inspections here for today. I intend to spend some time to drink tea at my leisure…”

“No, it’s not done yet. Next would be the inspection on the reports of the individual allocations of toll collected from the [Astral Gate]s. If there’s no problem with that, please acknowledge that with a consent. And following that we also have the matter about the repairs on the shrine as well as the licensing of the ascension to the Six-digit for the Community in question. Then when all those are done, please begin the crafting of the trial suitable for the Level-Ascension Trial.”

“Wait…Hold it for a moment! Aren’t I scheduled to attend the Convention at the territory of Salamanders[5] tomorrow?! How can there be time for all……”

“No problem. If you start at a galloping pace now, it will be fine. We can cut the time on breaks, sleep and meal times and it will be possible to finish it all by tomorrow morning.”

“Oi—! How can you expect me to attend the Convention in that kind of state?!”

“You must be joking again. There’s no grounds for you to discuss about a change in your ‘showing up’ at the Convention anymore. You will show up for the event even if you do not wish to.”

The female clerk used her critical gaze to give him a one-over. In her eyes, Kouryuu was only the stand-in for her master and this sort of tardiness was damaging to the reputation of Shiroyasha.

“Moreover, Shiroyasha-sama has always completed this amount of workload without fail on a daily basis. If the new Master starts to neglect his duties just after the taking over of office, wouldn’t that be damaging to the reputation of [Thousand Eyes]?”

*Uu……* Kouryuu fell silent at that.

This was undeniably his greatest miscalculation.

Finding nothing to say in his defense, Kouryuu could only give a weary sigh while looking up at the skies.

“……How capable can that fellow— Shiroyasha be?”

“At least much better than you. Anyways, you will get used to this schedule after your third month in office, so that would allow the workload to slowly increase during the course of the three months.”

“It…It’s still going to grow more than what we have now?!”

“Yes. It will be much more than the workload we have currently.” The female clerk announced with a serious face.[6]

And Kouryuu’s shoulders drooped even further as he felt his strength draining out of him.

—Not long after that, the both of them were walking pass the Fountain Plaza to come out into the streets of the Free-use section of the region. The stale atmosphere of before had already been replaced by a lively one, having had its atmosphere livening up with activities once more.

After the appearance of a Community’s revival, news of it had spread and quickly became a hot topic for everyone during their conversations over tea or even after mealtimes. The news of [No Name] defeating two Demon Lords had also reached the neighboring regions as well for the plaza in front of the Outer Gate had now transformed into a stage for various merchants to host their Games.

The duo were taking large strides towards their Headquarters while looking around at the vibrant street that was all around them when a blonde servant girl appeared from around the opposite end of the street— Leticia.

The other had also seemed to have noticed Kouryuu as she gave a silent expression of respect with her gaze.[7]

“Well, isn’t it the East Side’s [Floor Master] Daihyo-sama? It’s been quite some time since we met.”

“HoiHoi…this sort of formality should only be reserved for strangers. Treating me like that even though we are old friends and all, isn’t it a little too exaggerated? Just be normal about it, Leticia, there’s no need to stand on courtesy.”

“Fufu. Then I shall take that as an order from you—Long-time no see Kouryuu-aniki. I’ve always wanted to say hi to you but it seems that I’m still late to do so.”

“Pay it no mind. Compared to that, is my [Eye] still sitting on the pedestal?”

Kouryuu had a strange smile on his face while asking his question candidly.

And Leticia’s expression had darkened at that,

“……Sorry…About the [Eye] given to us by you, Kouryuu-aniki— the [Water Pearl] is no longer in our possession for it was taken away by the Demon Lord three years ago”, as she gave her apology gloomily.

That was something that happened before Izayoi and the others were summoned to the world of Little Garden. Originally, the pedestal for the water source used to hold the water pearl that was manufactured from the [Dragon’s Eye]. And the water source was none other than Kouryuu’s eye at that time.

Kouryuu who had already expected that sort of answer did not show any anger in reaction to the news, but only gave a slight shrug of his shoulders.

“Nn. Just as I thought. Oh well, since it was stolen, there’s nothing we can do either. And after all, it was something that I had given to Koumei and Canaria, so you needn’t feel bad about it.” 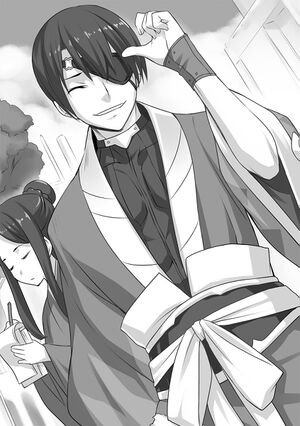 “Hearing you say that really put my mind at ease now. But it might be possible that it’s in circulation in the market. If I do hear news of it, I will try my best to return it to you immediately.”

“It’s okay. There’s no need for that. Even if you do return it, I’m already using another eye.”

Kouryuu used his thumb to point at his eye patch while giving a shrug.

The surprising revelation caused Leticia to be astonished but she soon came back with a response:

“Then……There’s already a new prosthetic eye in that socket?”

“No, it’s actually due to another reason—”

“Kouryuu-sama, if we don’t leave now, we will be out of time.”

The female shop assistant interrupted Kouryuu’s words and he quickly broke off the conversation to add his last question:

“Right! That lad—Izayoi and the other two lasses, are they still doing well?”

“Mhm, they should be very energetic today actually. After all they did go to the Convention destination early and they should be having a great time at [Kouen City] now.”

Leticia replied while taking her leave to walk towards the [Astral Gate].

Kouryuu saw her figure off while his eye took on a serious look.

(Is that so?……They are also going to the Convention huh?)

He muttered to himself as he lifted his head to look up at the clear skies.

—The blood sample collected from Izayoi in [Underwood] had already been handed over to [Laplace Demon] and Kouryuu had asked for their help to analyze its components.

Although their activities as a Master had already ceased, they were still active in other activities. After all they were called the omniscient demon for a reason and he guessed that if anyone could check something from the blood, it would only be them. Hence his request to them for the results. And according to the reply from them, the finalization of the results would be given to him during the Convention.

If it turn out that Izayoi was similar to Sun WuKong, [Great Sage Equalling Heaven], who was a Half Celestial being—

“……Looks like I better get there a bit earlier.”

“Sorry to trouble you but please adjust the schedule a little to make it possible for me to rush to the Convention by today.”

“Hah?” The female shop assistant gave a cry of surprise.

But she could see that Kouryuu was serious about it and she gave the schedule sheet a hard and long look.

“……Since it’s something that is so important that it cannot be pushed away… I guess let’s do it this way. As long as we bring out the ultimate technique, it will surely work.”

The edge of the female shop assistant gave a slight curve upwards.

“—you will have to mentally prepare yourself to see some blood being spilt.”

The One-eyed Master’s eye was getting a little watery at the edges.

Suddenly feeling a bad premonition regarding the heavy work load ahead of him, Kouryuu made haste, back to the [Thousand Eyes] branch office.