She brushed the debris off herself and saw the blue sky stretching endlessly before her. She smelled the air after rain, but there was still dust everywhere. Still, the air smelled of rain.

Leerin didn't know what to say as she watched the sky. Alsheyra had pulled her out of the debris. Everything looked very tragic, but Saya had protected her so Leerin was not injured. Even her clothes showed no stain.

And Saya had wordlessly handed her something when she emerged from the wreckage.

She wasn't clear on where she had put it after taking it off. Perhaps she lost it somewhere and Saya had picked it up for her, or perhaps this was a new eyepatch. She couldn't tell.

The eyepatch was proof of her unusual right eye.

She couldn't return to her old self now that she was wearing it.

He ran without heed for the palace after seeing it collapse. He was worried for Leerin's safety and he wanted to save her. His wish for her true feelings, the disappearance of the monster, the passing of the danger, none of these things mattered to him. All he wanted was to see Leerin. He shivered when he saw the wreckage that was the palace and thought she was inside it.

He saw the Queen and an unfamiliar girl climb out of the debris, followed by Leerin just when he wanted to ask for Felli's help. 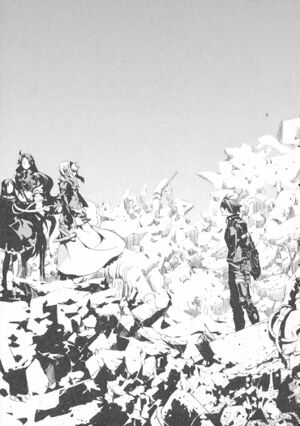 He was speechless at her question.

No, he knew she was refusing him. Was she doing this for his sake? Or not. He understood Leerin's feelings when he saw the mirror in his father's face that was full of murderous intent.

Still, he had arrived.

He must say something, something........ If he didn't, then everything he had done so far was worthless. Derek's injury and his own tolerance of the painful memories would have all become worthless.

Perhaps this was the only chance left to him but his heart couldn't say anything.

"You shouldn't be standing here anymore," Leerin said coldly. She didn't want to give him a chance.

"Your power isn't omnipotent, so you're not necessary to this city and to me."

"I'm happy that you came, but it's enough. Why didn't you return when you saw father?"

He wanted to overcome the wall that was blocking him with many words. He called. If he didn't, he probably wouldn't be able to say anything. It must not be like this..... Was she wearing a blindfold because her eye was injured? It made her face look different from his memory. She was very calm, as if she could calmly accept everything no matter what he was to say.

"I, I want to know your thought. Not father's, but from your mouth. If there's anything I can do......." he said as he slowly walked over to her. His life would have been like a candle in the wind if the Queen wished it, so it didn't matter that he held no weapon. He tossed away the Sapphire Dite and slowly approached her with arms opened.

"For me?" she walked towards him too.

Her expression of somberness was unchanging.

"For me? For me, you'd stay in Grendan? You'd fight the enemies for me?"

"Because we're siblings? Because we're both orphans, that we both grew up in the same orphanage? But I already know of my identity and who my parents are. My father is Herder Eutnohl. My mother is Meifar Stadt. I'm not a Marfes anymore. I'm now Leerin Eutnohl, a member of Grendan's three royal families. Will you still protect me? I'm not part of your family anymore."

Layfon felt that what he wanted to say was becoming more and more incomprehensible. All his words in his heart had lost meaning before her words. Why did he want to protect her and save her? His words had suddenly lost their meaning.

Something was being dug out.

One word was being slowly dug out after everything was taken from him.

He gripped it with determination enough to face death. He thought everything would turn positive if he could grab hold of it, and he felt it was a very simple word. As long as he took hold of it, he felt that she would smile no matter how somber she was, no matter that she was showing him a cold expression he had never seen before. Perhaps time would return to the past days of his living with Toby and Derek.

But nothing had caught up.

Leeirn's face appeared before him.

She didn't say anything. She just placed her hands on his cheeks. The feeling of her fingertips conquered his face. Her eyes moved near, including the eyepatch. She was so close that he could even see the pattern on it.

Layfon couldn't react because it was all too sudden. His brain turned blank. His fingers shook. And as expected, what he wanted to say was now in the mouth of his throat.

But he didn't say it.

The impact was crashing against his chest.

The somberness was gone from Leerin's face. Her left gaze was filled with fury and contempt. Words of scorn came from her lips that had been forcefully overlapped with his.

"A man who can't even embrace."

She turned her back on him and walked back to the Queen. Layfon finally stood up and reached out a hand to her, but the Queen was suddenly before him, blocking his path.

And from behind him.

"Your Majesty, are you all right?"

He didn't know who howled out his name. It wasn't Kanaris, so it must be one of the Military Artists.

"What are you doing here!"

Layfon didn't know why they were angry. Leerin slowly left, followed closely by the girl of night, and then behind them was the Queen. Kanaris also left with them.

Layfon was left rooted on the spot, unable to move.

Someone took hold of his shoulder and many hands grabbed him. They probably thought he wanted to do something to the Queen. Someone kicked his knees from behind and made him kneel. He felt pressure on his wrists. His head was on the ground. Layfon hadn't thought of resisting. He just took it all in silence.

He didn't understand why he was released. Wailing and impact suddenly filled his surrounding. Freedom was obtained and someone then pulled him up and jumped to a place far away.

He finally realized it was Claribel. The two of them were in a place far away from the wreckage of the palace.

He finally realized after arriving at this far away place of the word he wanted to grasp. It now revealed its vivid appearance.

He knew his understanding came too late.

Leerin stopped at Alsheyra's word, a word full of doubt.

The commotion was far behind them.

Light suddenly gathered before her chest when she stopped walking. It gathered into a form.

The name of the Heaven's Blade successor given to Layfon. He had been holding it all this time. The Heaven's Blade that was thrown out in order to open a hole in the monster's body had now returned by its own will.

She silently held the Dite. Her chest felt like it was being ripped apart. Perhaps she would have felt better if blood could flow. Even if she was to die.

"Hey," Alsheyra said. "If it pains you so much to want to cry, isn't it better to put it aside? It's good that you don't want him to fight. This way, you can heal him."

"What are you saying, Your Majesty?"

She hadn't felt anything flow down her left eye. Not wanting him to fight. He shouldn't have been chosen to fight in this situation.

"No. I was just mocking myself for being stupid. A stupid sister who can't leave her younger brother. I was laughing so much that tears fell. Is there a problem?"

Zuellni recovered after this. The broken leg had regenerated. Looking at Zuellni slowly leaving was like watching Layfon leave her. Leerin pulled her gaze away.