Epilogue: And the One They Face[edit]

Bound by metal ropes, the roaming bus was lifted up.

His stomach turned as the shaking caused by the bus bumping into the materials to slow down the contact between the bus and the outer edge stopped.

"Ahh, I was used to this six years ago."

He brushed away the hair that blocked his vision because of the shaking. He sighed. The bento and the nutrient pills in his stomach turned. This discomfort made him pale.

"Getting clumsy? Or is it because of age?" Karian mocked the person sitting beside him, and then smiled sourly.

The man beside him smiled.

The man, Vance's smile, Karian couldn't take his eyes off him.

"Ah, you've been smiling a lot since graduation."

"True. I've been released from the pressure. What else can I do but smile."

After noticing that Vance was contradicting his own words, Karian stood up and grabbed hold of his own luggage. The two of them were wearing durable clothes because they needed to journey far away.

It took them some time to get to the city named Metelo.

They got off the roaming bus.

"It's nostalgic to see you here," Karian said as they headed for the residence for outsiders.

"Geez, our route is the same till now. But are we to part here?"

"Then our fate to meet ends here."

Something was hidden behind their casual conversation. They both knew it but didn't show it as they kept walking. Inside Karian's mind floated the scene of the graduating ceremony.

The new Student President Samiraya gave her speech. Her short stature as she spoke seriously into the microphone made everyone laugh.

He felt discomfort, but he had changed his mindset while waiting on the roaming bus.

"Gorneo, that fellow has too much energy when he's looking after Shante's recovery."

Karian patted Vance's back nonchalantly, comforting him. Of course, with a smile.

Vance watched him with anger.

"Really, your bad habit hasn't changed since I first met you."

"I've been growing, but it's not easy to change. You too."

"Growing and changing aren't the same. We've grown but haven't changed. That's the case. But if you've changed, as the head of the Military Arts department, I wouldn't wish for it."

"Your tongue is still as sharp as ever."

"Yes. And so I know how and when to use my sharp tongue. That's my growth."

They smiled as they headed for the hotel.

They both knew this ending as they walked step by step. There was probably still some time left as they waited for the next roaming bus. But they felt that that time was meaningless.

Perhaps they wouldn't have the chance to speak this anymore.

And so they were confirming the ending.

If there existed some deviation, "time" must be it.

Vance thought here existed something they had in common.

And the difference was obvious when they reached the hotel.

"You're finally here. We've been waiting."

Vance understood when he heard the greeting.

At the entrance of the hotel. Passengers of the roaming buses were all here to go through the administration process so they could stay in this city while waiting for the next bus.

Vance couldn't believe the male and female pair he saw who were ignoring everyone else around them.

"Sorry for making you wait. How's the preparation with the bus?"

"All done. Including the guard and the driver. You will look just like a rich young man."

"Then I'll gladly accept your words. Anyway, what is left to prepare is my wallet."

Karian took over. "Hey," he said to Vance, a friend he had been with for six years in Zuellni.

"There's something I have to do."

"But it's not something I can do by myself. So I need guards. But there aren't many guards that I personally know."

"Don't want to come with me and greet them?"

"You have your own city to return to, and there's an obstacle too. I'm sorry, but I don't want you to worry about me. On that level, they are quite capable too."

Vance lifted his head. All kinds of words whirled in his mind, but he swallowed them all.

"Yes. And we aren't comrades of the same path."

"I see," Vance nodded and patted Karian's shoulder. The thin figure shook at his patting. 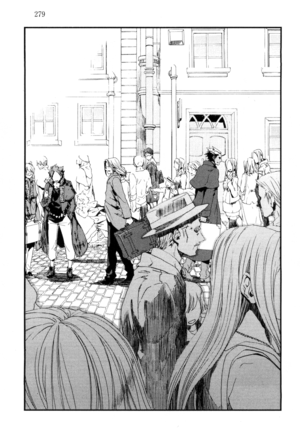 Looking at his friend vanish amidst the crowd heading for the hotel, Karian turned to his new companions.

Looking at him who had a tattoo over his left eye.

"Then, let's listen to our client's request one more time."

"Uh, that, it's a bit embarrassing," Karian said, but he didn't look shy at all.

He declared and took a step.

For a new journey.