The sound of wind blowing out of the air purification system and the sound of the vehicle swaying along with the city's movement....... This was Leerin's second time hearing it.

"Do you really have to go?"

She seemed to have heard similar words before. The pretentious teary eyes before. Leerin wasn't angry, but she felt that strength had been drained from her limbs.

"What're you doing?" she groaned, putting down the luggage beside her and pressing a hand on her forehead. Thinking back to how she was like that in the past, she thought she'd die from embarrassment.

Synola stopped pretending and put her chest out. "Excuse me. I'm sad because you're leaving."

Leerin was at the station of the roaming bus. Once she made her decision, she had acted swiftly. She had applied for temporary leave from school, and had then gone to pack her luggage and fill in the paperwork for a space on the roaming bus to Zuellni. She spent her last night with Derek. Her adopted father didn't even escort her to the front of the door. That was what he was like.

Who would have thought that Synola would be here.

"Well, is it not good to see my cute younger friend leave?"

She told Synola about her decision yesterday, then was dragged to the pub they visited before. Synola pulled in random patrons of the pub for a parting party. Leerin had thought she would leave it at that.

"Well, have a good trip. I won't urge you to hurry back, but please come back in spirit."

"Ah, but I still hope for you to return sooner. I can't calm down without touching Lee-chan's breasts."

".........Come back before the symptoms of withdrawal show up." She put her thumb in her mouth like a kid.

"I'll try to return later," Leerin massaged the side of her head.

The whistle sounded loudly, cutting through the noise of the crowd.

(I can't think of it that way like her.)

She recalled the time when she saw Layfon off. She thought she wouldn't see him again. Probably not? The feeling with Synola was different, but Leerin couldn't compare it with another. She waved at Synola one more time at the entrance of the bus, and entered the bus.

She looked at the seat. For a person who would spend a long time in the seat, the space given was roomy. It was big enough for her to sleep in it. The luggage space was above the seat.

Someone took hold of her luggage.

Thank you very much. That was what Leerin wanted to say, but when she turned around to look at the person's face, her cheek twitched.

"Just that much luggage? So little for a girl."

Speaking flippantly as if his opinion applied to everyone. A handsome young adult. Laughter shone in his eyes as he looked at her.

"Uh, I've got a secret mission so I have to travel to another city. What about you?"

"Never mind. This will be a long journey. Let us spend the time happily."

Was it good to tell him she was going to meet with Layfon.........While she worried over it, Savaris had already lost his interest in the question he raised. The bus driver announced the bus was about to depart from the city.

A Heaven's Blade successor in the bus............That should guarantee the safety of the trip, but for some reason, Leerin felt uneasy.

"Ah~ Leaving the city is just the first part of the trip. I'm really anticipating the rest of it~" Savaris said happily to himself.

She ran along the edge of the city to chase the roaming bus. She finally reached the limit of the city. Synola stopped running and put her hands on her hips as she watched the roaming bus disappear in the horizon. An average person would have confused the bus with its surrounding scenery, but not Synola......or Alsheyra Almonise, the Queen of the Heaven's Blade successors.

"What would happen next?"

Alsheyra wasn't worried about Savaris. It was useless to worry about him. If he died in the middle of the journey, then let him die. Luck was required for what Alsheyra wanted. If Savaris came back dead, then luck wasn't on her side. She couldn't do anything to gather twelve Military Artists with exceptional abilities to become Heaven's Blade successors. Luck was needed. Besides, the birth of someone like Alsheyra was in itself luck. 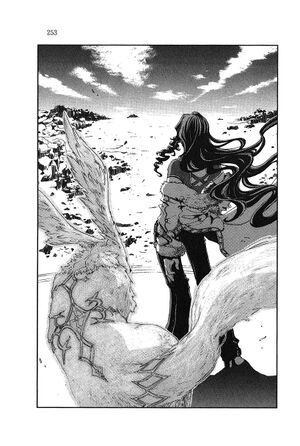 Her gaze left the bus and moved to her own feet.

The reposing figure of a beast had appeared at some time. It wasn't your average tamed type of beast. Long fur wrapped around the body similar to a dog's. The front of its paws resembled human fingers. That beast answered her.

"What do you think, Grendan? Think your kind will come?"

"If they come, they'll only be destroyed and hunted, like I was," Grendan's voice was cold.

"That was a long time ago."

Grendan rested its chin on the ground.

"Well, I don't know what'll happen, but it'll be fine as long as Lee-chan's safe."

The laughter came from Grendan's nostrils. As if looking at the direction where the roaming bus had merged into the horizon, it spoke, "......A nightingale is singing."

"Huh?" Alsheyra turned around at the unfamiliar name.