The female students next to her were talking about what store they would go to next, though at the moment Vati walked on the road alone. Other than on holidays, Vati worked every day for Meishen's shop, so Vati right now didn't have anything she really wanted to do.

Vati murmured in a volume low enough for no one to hear.

Her low murmur didn't have any meaning. It was an error caused by integrating into human society...... In other words, she mumbled in order to act as a human. However, Vati didn't think she had any reason to deliberately correct this error.

"No, you don't need to do that. Please retreat, and return to your original task."

Vati confirmed that the reconnaissance troops had retreated.

The reconnaissance troops had perfectly accomplished her desired objective, and they had examined her opponents' unknown combat power.

Though her operation to secretly get rid of Nina Antalk had not succeeded, it wasn't important. Vati judged that to continue to disturb the interpersonal relationships of this city wasn't efficient.

Vati pondered the events after this, pondered the final goal for which she had come to this Academy City. Vati primarily pondered something that had nothing to do with battle plans, and in human terms this goal would be a 'private affair'.

However, Vati already didn't have anything she could take the initiative to carry out. She had exhausted the things she could do that wouldn't disturb the interpersonal relationships of the people in this Academy City, and that wouldn't make the Academy City feel any external stimuli.

The miniature garden that protected this Academy City wouldn't allow it to feel threats from external enemies.

Other than that, Vati was only an observer. Moreover, in the first place, her goal was to observe.

Long before she had called out, Vati already knew who the other party was. But, she hadn't stopped her footsteps and turned her head.

The person there was Mifi. In order to distinguish herself from the group of students after school ended, she made small hope while waving her hand. Every time she hopped, her hair that was tied into two ponytails would swing up and down.

The person next to Mifi was Naruki and the one hiding behind the two was Meishen. Meishen, who also recognized Vati, showed a shy smile towards her direction.

"It's nothing much, Vatti. I saw you so I called out."

Mifi's cheerful voice made Vati tilt her head. That her body could show a doubtful action so naturally was evidence of her normal mimicry functions.

"Vatti, do you have plans right now?"

"No, nothing in particular."

"Then, do you want to come walk around with us to see if there's anything good to eat? Ah, I should squeeze in some coverage of gourmet, so I'm looking for companions to share calories with."

"I see, are there no problems with me coming along?"

An additional item was added to today's itinerary.

"Ah, since we have a woman with a big appetite, we don't need to be worried about not being able to eat it all."

"It's not important. I'm sure that Nakki can definitely eat more than us three put together."

"Ohh? Is this something you say around a coworker of your friend? I see how it is."

"Awawa, wait a second, Naruki-san, we should talk things over. We should act according to how people always say to avoid evil fights. Right, how are things going for you?"

"Hm, I have the feeling that I won't be satisfied unless I hit you a bit, so first let me hit you some and then let's talk.

"Okay, let's go to the lake first. Let me show you the terror of human depth charges."

Mifi squeezed through the crowd to escape, and Naruki chased after her.

Vati who had been left there looked at Meishen who had also been left behind.

"Is it alright not to stop them?"

From the expression on Meishen's face and her words, Vati judged that this wouldn't be any big trouble, so she walked with Meishen.

"Right, Mifi-senpai just called me 'Vatti', did she perhaps forget my name?"

"That's because Mi-chan likes to give people nicknames."

"Is that so?...... However, doesn't that mean pronouncing it takes longer?"

Meishen showed a puzzled smile. Vati thought about how to explain.

"If you wanted to shorten my name, I think 'Va' would be somewhat more appropriate. Should I propose this to Mifi-senpai?"

In order to quickly propose her recommendation to Mifi, Vati prepared to chase the two. Meishen seemed like she would be left behind, so Vati held Meishen's hand, jogging together to catch up.

In order to continue her observation, this city had to stay peaceful.

Vati needed this kind of peace.

The sunset dyed Nina and himself red. 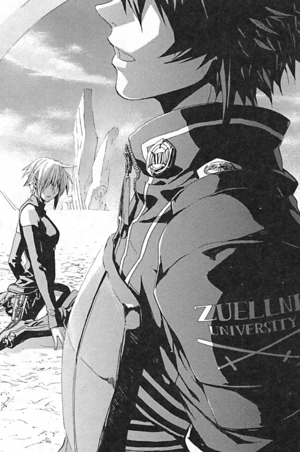 Layfon felt that he should say something, but he didn't say anything.

After Felli had cut her communications, the two people had sat down. Though this was because the two were using internal Kei to heal their wounds, the more basic reason was that they didn't want to move.

Thinking that Gildred was still hiding in this city, perhaps the two of them should have no leisure to squander time in this place. But, since Felli's Psychokinesis had reached this place, there should be no more dangers around that could escape her eyes. Right now Layfon wanted to let her handle everything and stay where he was without doing anything.

The words that were squeezed out of his mouth with difficulty were only these.

Perhaps there were other words that he should say. If it were now, perhaps Nina would tell him. Other than Layfon, there were no other people here. No, Felli's Psychokinesis filled the whole city, but, it should be right to inform her. No, if his conceited manner of expression didn't matter, then in order to rely on his and Felli's strength, it shouldn't be a big deal to say the truth. If some horrible event was going to happen, his own Military Artist ability and Felli's Psychokinesist ability would definitely come in handy.

But, Layfon didn't say half a word. Nina sat on the ground the same as Layfon, and Layfon could only gaze at her back figure sitting in front of him.

The sunset was behind her. Her back was illuminated by the evening glow, seeming as if she would be taken away by the atmosphere of the night.

Why would he have this kind of feeling? The answer was simple.

Because she hadn't said anything. Everything that had happened here was the continuation of the battle in Grendan, and Nina who had somehow been involved in that battle was the core of this event. Gildred was a member of Nina's family, and those giants and the group of abnormal filth monsters that had attacked Zuellni had similarities.

The battle that had just happened here was a battle to train Nina.

Nina was the core of this.

Moreover Layfon was not permitted to enter that core.

"Even if you aren't involved in this, fate will continue on."

Before Layfon could think of something to do, this sentence stopped him. It echoed inside his chest, bringing him pain. Leerin's face emerged in his heart. When she had pushed Layfon away, she had her head down. And when she raised her head, a cold gaze ran through Layfon.

Was it only Layfon's willfulness that he had expected something in that moment? However, regardless of how Layfon thought, he felt that at that time Leerin had shown that kind of gaze in order to rub out her feelings.

Perhaps he should confirm this step by step.

He couldn't just blindly speak of his heartache.

"What I want to know, I'll go find out by myself."

Nina turned her head, her figure still illuminated by the sunset.

But, Layfon already didn't feel that she looked like she was about to disappear.

"If something tries to stop me, I'll fight it with all my power."

This was a declaration of war for Layfon.