Haia was a strong Military Artist, but he was too naive, losing to a Layfon with an injured left wrist. Too naive, even though he had the support of his comrades.

Savaris left the roaming bus station and headed for Zuellni's multi-legs near the contact point. That was the best place to observe the surroundings.

"It's a shame to turn weak. Well, since it's not an order, I'm not particularly sad about it."

"Is it still in that girl's body?"

The Haikizoku. Savaris came to bring it back to Grendan. What would happen when he took it back? Did the Queen order him to retrieve the Haikizoku just for the sake of becoming strong.........Definitely not.

That was why so many strong Military Artists came from Grendan. That was why Grendan's people desired power. That was why they needed the Haikizoku more than anyone else.

"Though I don't know what my generation can do, if chance presents itself, of course it'd be good for things to get more interesting," he said to himself and squinted happily.

Dragging himself slowly forward, Layfon crossed the contact point. Myath's Military Artists walked past him with downcast eyes. He averted his gaze. Sometimes, anger was focused on him, but a glance at Layfon's bloody wrist silenced Myath's people. A gust of wind could have easily blown him away. No one did anything to him.

Nina's team had finally caught up. Nina's face paled at his appearance. "You need immediate treatment!"

"It's ok," he stopped her from calling a stretcher. He was already treating himself through Internal Kei. He had stopped the blood loss. The nerves needed to be reconnected in a hospital but he could still walk.

"Instead of me, we should check whether Felli-senpai has been safely released," he increased his pace and escaped Nina's anger.

(For now, let's try the roaming bus station where the Mercenary Gang's roaming bus is located.)

Nina didn't say anything and followed him, perhaps beaten by his lack of hesitation in the decision.

He didn't need to walk far. He walked past the crowd of joyous students and suddenly found Felli before him.

He squeezed out a smile. He thought he could ease her by lifting his wrist, but that was too much for him.

The amount of blood painting his clothes exposed his lie.

"You really are a fool," she said slowly, looking at his injury.

"Couldn't you have fought in a more relaxed manner? Why......" Her shoulders shook. Was she crying? Was it fear that she had been suppressing while she was imprisoned?

In truth, all Felli felt was regret. She only thought of "whether Layfon will save her" rather than thinking of Layfon getting caught in a terrible fight. Hence when he appeared, sustaining a heavy injury, she thought she had to shoulder the responsibility even though she didn't directly effect the result.

Layfon put his right hand lightly on her shoulder.

She lifted her head and he smiled. But he had lost too much blood to concentrate, neglecting the girl standing behind her.

That girl walked past Felli and slapped him on the face.

The air froze. Felli, Layfon and Nina turned speechless. Felli and even Nina failed to react to this sudden action. That wasn't it either. He thought Nina would be the one since that slap came pretty quick. But reality showed otherwise and painted an unbelievable illusion.

He lifted his head, feeling the numbness spreading on his face as he looked at the girl.

The female that couldn't possibly be here. His childhood friend, the big sister of the orphanage, the person who should be in Grendan was standing right in front of him! An unbelievable reality. 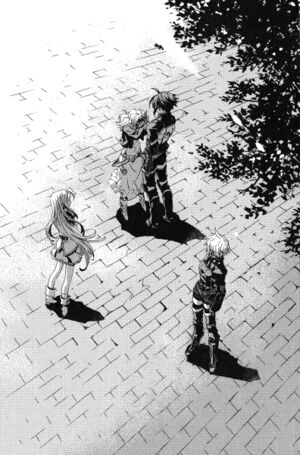 Leerin's words flowed like a dam with a destroyed wall, her cheeks red with anger.

"Why do you always make others worry about you! Why do you always show a face that says you're shouldering everything! You're not honest at all. I don't know what you're thinking! You're always like this, bearing everything. Do you think other people are happy because you do that? Tell me!" she said in outrage, ignoring the silence around them, ignoring the confused Felli and Nina. "Don't......make me......worry anymore," she said, her words getting lighter.

"Is it really you, Leerin?"

Tears leaked from Leerin's eyes. She pulled towards him and buried her head in his chest. Her shoulders shook.

"Leerin," he touched her back. This wasn't a dream.

What was he thinking at this moment.........Before that question surfaced in his mind, he felt something hot roll down his face.