There was something very important.

Layfon had only come here because the other party had said this. But for some reason, he currently held a vacuum cleaner in his hand.

It was a holiday morning.

Layfon suddenly turned around and mumbled.

There was something very important - the flake that entered his room had said this, so Layfon had rushed over here. However, he currently held a vacuum cleaner in his hand and was vacuuming the floor, what was going on?

What had happened? Layfon couldn't really figure out what he was doing.

With at polite intonation, Layfon queried the person who might be able to answer him.

The other party casually replied, and Layfon didn't know if that was good.

That person was wearing a loose shirt and shorts, and held her knees sitting on the sofa viewing Layfon's appearance as he cleaned. 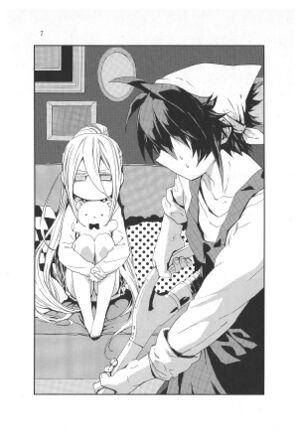 "Why am I cleaning here?"

"You're unwilling to clean my room?"

What Layfon wanted to ask was 'why', the important part wasn't whether he liked it or not.

But, Layfon didn't have the courage to face that question.

To put it differently, she felt very impatient.

Even the clothes she wore were the same; judging from her everyday behavior, she would never wear something like this. Since Felli had moved to this apartment building in the Warehouse District and had become Layfon's neighbor, Layfon understood something, which was that she would usually be dressed neatly in front of him. Layfon had many times before seen Nina, Meishen, and Claribel's sleeping clothes, but had never seen Felli wearing sleeping clothes.

Layfon seemed to have only seen Felli wearing her uniform or outside clothes [1].

Perhaps what Layfon thought of as outside clothes might be Felli's home clothes.

(After all, she's a wealthy person.)

What he meant was the Felli's family was very wealthy.

Layfon didn't really understand why Felli had moved to this apartment. He always felt that even if Felli wanted to reduce her rent, she shouldn't have a reason to reduce it to this level.

But, he didn't dare to ask her this question.

For some reason, Layfon felt that this seemed to be a landmine that he couldn't ask.

Felli didn't want Layfon to help her do big cleaning, but had really half-forced him to do ordinary cleaning work.

Speaking of Felli, she sat on the sofa looking at her own toes. What was she thinking?

Layfon was in a perplexing situation, and had been forced to clean the living room and corridor.

Layfon cautiously and warily opened his mouth to speak, and as expected Felli unhappily raised her head to look at him.

"I don't want to do anything at all today."

Felli said this with a volume even lower than usual.

Layfon looked at the window. Layfon had just been using the vacuum cleaner to vacuum the floor, so he opened the window, and the hot and humid summer air flowed into the room via the window. Felli's fingers impatiently tapped something. Layfon stole a glance. It had been the remote of the room's air conditioner.

Layfon closed the window, and buttons were rapidly pressed, cool wind beginning to circulate around the room.

"Is it because the weather's hot?"

"How could that be?"

The cool wind let Felli show a relieved expression, but as Layfon asked this, she once again became unhappy. He had spoken wrongly - Layfon thought this, but Felli didn't continue speaking, so he thought that perhaps Felli really wasn't that unhappy.

But, what was going on?

"I don't want to do anything."

Felli once again expressed this, so Layfon opened his mouth to ask.

In other words, Felli wanted Layfon to do something. Though he didn't know the reason she wasn't happy, in general the situation was like this.

Layfon didn't have much to do today. Since the situation was like this, he would just follow Felli's instructions.

"Uh, right now should be about time for lunch, right? Is there anything you want to eat?"

Layfon went to the kitchen to check ingredients, returned the cleaning supplies back to his room, and began making Italian noodles.

From then onwards, he coped with Felli's capricious requirements, all the way till nightfall.

"That's enough, please put everything back."

Felli said this at the end, and Layfon only felt extremely powerless.

Felli still occupied the living room sofa. Layfon looked at her, and silently nodded his head.

Afterwards, he moved the furniture back to their original position.

An awkward atmosphere arose in the air.

In this kind of atmosphere, Layfon put the furniture that he had just moved around back to its original place. Because of the furniture moving, the dust that hid in the corners had scattered about, and Layfon once again took up the vacuum.

When the cleanliness of the room was once again restored, the hands of the clock already pointed to a position of nightfall.

As he collected the vacuum, looking around the restored room, Layfon let out a breath. He estimated that the room had become spotless, without half a speck of dirt.

Felli who had sat on the sofa till the end, other than when she ate, finally stared at the wall with an unhappy face.

"What are you saying?"

"Huh? Because it's almost time to eat dinner."

At that moment, even Layfon who was usually said to be slow understood the meaning behind those words.

Could it be that you aren't mad? That was definitely what Felli wanted to ask.

"Before we had a rule that even if we quarreled we couldn't forbid the other person from eating, so I'm automatically like this."

Layfon meant the orphanage. In the environment of the orphanage, since the one who controlled the kitchen naturally wielded power, forbidding other people from eating was banned to avoid dictatorship.

This kind of rule had already entered Layfon.

Of course, even if Layfon didn't make dinner, Felli also had money, and had the means to move. She could bring food back to eat, and could also dine out.

But, today Felli didn't have the energy to go out.

Layfon tried asking. Afterwards, she raised her head in surprise.

Thinking of how he should express himself, Layfon looked at the ceiling.

Then, he thought of what he should say.

"The night before a test, even though there's no reason, you'll suddenly feel like you want to clean or organize things, right? What Felli gives off is the same feeling as that kind of time."

There was something that had to be done. But, even if it were possible one really didn't want to do it. Because one couldn't feel determined, he always turned his thoughts to other things.

Felli said this, but her words didn't have any force.

"I'm always in your care, so I feel it wouldn't be bad if I could do something like that to make your mood better......"

"Then, let's first eat dinner. Do you have anything you want to eat?"

"That... Then, let's eat something filling and easy to digest."

"That request is pretty difficult."

Even if Felli's face had almost no emotions, he strongly felt the emotion contained in those words. In order to respond to her expectations, Layfon began thinking.

A light vegetable soup with bread...... after thinking this, the necessary ingredients emerged in Layfon's mind one by one.

"Thought the ingredients for soup are enough, we don't have bread, I guess I'll go get some soon......"

After saying this, Layfon quickly chopped vegetables, getting the materials ready for soup.

"Then, I'm going to buy bread, please look after the pot. Just turn off the flame when it's almost boiling."

Felli didn't even have time to respond.

Left alone in the room by Layfon, Felli sighed, and then looked at the kitchen.

"He really is very slow, being messed around with like this and not getting mad."

Felli didn't want Layfon to get mad. But, seeing himself being so humiliated, what would he think? Felli quite wanted to know.

Felli didn't think she understood everything about Layfon. However, until today she hadn't had any reason to test Layfon's 'Mister Nice Guy' personality, right?

But even so, the outcome of testing was somewhat different from her predictions. How Felli had thought things would develop was...... Layfon would be perplexed to the end apologizing to her, but the result wasn't like that.

It was a misjudgment that made her happy.

"This is good, because I've already decided to walk that path with you."

After mumbling this, the ambiguous determination in Felli's heart had finally fallen in the right place.

That night she would challenge the deepest part of Delbone's legacy. [2]

She once again renewed her determination.

She should tell Layfon this over the dinner table.

If she did this, what kind of expression would he show?

"It'll be enough if he's thankful."

After Felli lightly mumbled this, she walked off from the sofa, moving towards the room.