The roaming bus still wasn't there.

"What's going on?" Leerin said at the bus station. She was fed up. The bus was many days late, according to the schedule. Only the sound of the lonely wind and the vibration of the city's multi-legs accompanied the outer edge of Myath.

"Well, not all things go as smoothly as expected!" Savaris said, sitting on the long bench with his back bent forward.

Leerin came to the bus station everyday, and Savaris always accompanied her. A number of passengers also came to check the status but after confirming the bus wasn't here, they all left. Only Leerin searched for the roaming bus with the pair of binoculars she had bought.

"Even if you do that, the roaming bus won't appear."

Savaris's pair of binoculars were more powerful and he could see further than her. Leerin didn't listen to him. She ignored him and looked through her binoculars again.

She lowered her binoculars to look at him.

"If he hasn't started anew and lives his life dragging himself around. What would you do?"

"I'll knock him awake," she said and balled her hand into a fist. Compared to Savaris' stronger arms, her small and delicate arm held up her fist.

He looked at her with a vague expression. "Really?"

He smiled and shrugged in admiration. Leerin saw his real smile. She once again picked up her binoculars.

"Since you're looking for something, why not look at something that can be seen!"

Some other noise came through to them.

"Such as that," he pointed.

Leerin adjusted the direction and the strength of her binoculars. A huge figure was moving above rolling dust. She thought for a split second that it was a filth monster.

A fight for selenium.

"Strict rules are set in a fight between Academy Cities, so it won't be that intense. Besides, you see the flag, don't you?" he urged.

Leerin didn't see it at first as she was adjusting the strength of the binoculars, but she managed to catch her target. The image of a young girl was weaved onto the flag like a crest. 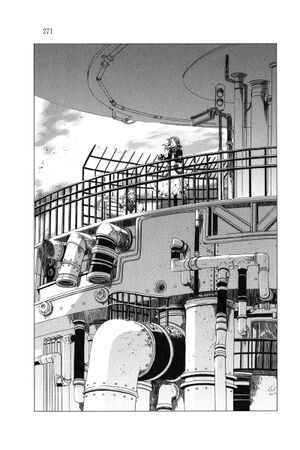 She had seen that crest in Layfon's letter that told him he had passed the entrance exam.

"Looks like we don't need to wait for a bus!" Savaris said.

Leerin watched Zuellni, the city that was heading for them.