Leerin and Derek came to the cemetery on Sunday, a week since their meeting with Almonise. They came to put the possession of the deceased in the grave.

Ryuhou Gadge. Emotionless, Leerin read the name engraved on the gravestone. She didn't know this person.

But even the heart of someone who didn't know the deceased could still stir. Leerin's heart stirred as she thought back to his life and the words of Queen Almonise: "Almost all those people who inherit the Psyharden technique are fated to leave the city."

Leerin wanted to deny her words. However the grave of Derek's brother from the same Military Arts lineage, who had died fighting on foreign soil, of Ryuhou Gadge, rejected that thought.

Leerin waited for Derek to finish his long prayer then left the cemetery with him. They walked without speaking, Derek being the solemn and silent type.

His sudden voice surprised her. He turned around to look at her, holding in his hand a wooden box wrapped in a piece of cloth. He had been holding it all the time before they entered the cemetery. Leerin had thought that it belonged to Ryuhou Gadge.

Derek offered her the box. "Can you give this to Layfon for me?"

The box weighed in Leerin's hand. It felt like a Dite. She wasn't a Military Artist so she wasn't in possession of a Dite, but she could tell it felt like one through her numerous contacts with Derek and Layfon. Both of them were Military Artists.

"I prepared this for Layfon. It's proof of his inheriting all of the Psyharden's skills," Derek said with a faraway gaze. "He was still very young when I finished teaching him everything. I could have given this to him back then, but I wanted to wait till he had grown older. In the end, I lost the chance to give it to him," he laughed mockingly.

Leerin thought it was because Layfon was exiled from Grendan, but she overturned that reaction. Derek could have given it to him when Layfon became a Heaven's Blade successor, but he didn't.

(Because Layfon held a sword.)

Leerin only realized this fact now, but she was able to realize it after spending a long period of time with Derek.

"He refuses to inherit Psyharden's techniques. I thought he'd have grown a little after becoming a Heaven's Blade successor......It appeared I was wrong. He refused to inherit it because he thought he had betrayed me, and he needed to pay for his wrongdoing."

About the underground matches and what happened afterward......Derek just met the person related to Layfon's past a few days ago, and meeting that person again had filled his heart with Layfon.

"He's sober and dull. I don't think he'll use the techniques I taught him even now. He needs forgiveness. He needs to forgive himself."

"You still contact him, don't you? Then you know where he is. Give it to him. Mail it or deliver it to him personally. It's all fine."

She could use these means to meet Layfon. Her face showed cheerfulness at this thought but she then shook her head. "I still have school."

It'd take at least half a year to reach Zuellni and return back to Grendan. If the location of Zuellni had changed, then the journey might take up to one to two years. She couldn't take a break from school for so long. Besides, it took money to leave Grendan.

Derek put his hand on her head.

"Both you and Layfon are like me. Too reserved. Don't sacrifice yourself because of that."

"Even I wanted to leave the city with Ryuhou."

His words silenced her. "But my personality prevented me from leaving. At that time, my master was heavily injured from his fight with filth monsters, so someone had to inherit the name, and the candidates were Ryuhou and I. For a mature Military Artist to leave at that time would be willful. Ryuhou did it, but I couldn't."

He had suppressed his wish to do what he thought was right. Layfon was the same as Derek in this way, and Leerin too.

"I don't think I made the wrong choice back then. It's the highest honor for any Military Arts school to nurture talented people like Layfon. But even so......" Derek paused and caressed Leerin's head. "If I had left behind my reservations and sense of responsibility, followed my desire and left the city.........My wish to do that is still with me. I don't want you to have any regrets."

"Don't worry about the expenses. If you want to go, then go. It's not good for you to exhaust your heart waiting for him. To give up going and then confirm that you should have decided otherwise."

He touched the surface of the wooden box in Leerin's hand and left her like that. He didn't ask her to follow. He was giving her time to think on her own.

Perhaps she might see him. But......Was it really her wish to leave this city and see him.........Spaced out, she stood, unable to find an answer to her own question. The weight of the box pulled her into further confusion.

The rest of the Mercenary Gang had disappeared when the dust and sand had cleared. The golden goat......The Haikizoku had also vanished. The Mercenary Gang had taken Haia and left the field. Nina and her team members had watched their silent departure without stopping them. What they were concerned with was what to do after this match.

To go against the Salinvan Guidance Mercenary Gang.........The Haikizoku caused this by entering the city by chance. It would take a long time to resolve this problem.

(How come it seems more problems are piling up one after another?) 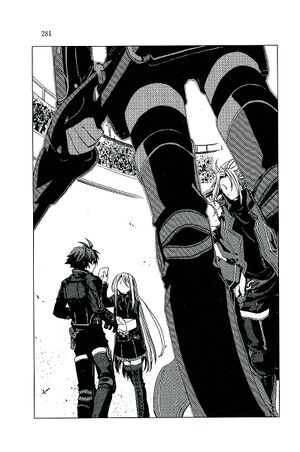 Nina felt exhausted but she believed the problems could be solved. She could only hang onto that belief, praying that her path towards saving Zuellni wasn't the self-destructive path of Dinn's. She could only hope like that.

With the clearing of the dust and sand, the audience finally saw what happened in the field. No longer bound, Dinn had fallen on the ground. His image showed on the large screen. Anyone could tell the 17th platoon had won. The siren signaling the end of the match rang along with the shouting of the commentator. Dissatisfaction, however, was mixed in with the cheering of the crowd.

A small and delicate figure stood beside Layfon, who was putting his Dite back into the weapon harness. Long silvery hair danced behind Felli.

"Are you all right?"

Blood covered half of Layfon's face. Felli was administering treatment.

"I'm fine," he said and pushed her hand away, but she forcefully dabbed at his wound with a disinfected cotton ball. Having no way out, he let her treat his wound.

Pain invaded Nina's chest as she looked upon that scene. She brushed grains of sand off her stiff hair and lifted her head to look at the sky.

(More problems are piling up.)

Whether it was inside or outside, it was the same with Nina's heart. She ignored the pain inside her and tightened her fist.