I sent you a few letters all at once. I think I understand some of your feelings now. For some reason, I really want to read your response. But what separates us is something that can't be easily overcome......It makes me impatient. Back then, I could hear from you immediately, but now I have to wait until letters get through.

I told you before that my days were pretty ordinary, but I have to study a lot, so it's not that easy. Did you read my last letter?

I'm writing this after the last roaming bus has left, so I think my last letter should have reached you before you read this. But perhaps you'll get this letter first. Who knows?

Recently, I've been having a recurring dream. It's about a more grown-up you and I, living together in the orphanage. I have to wake you up in the morning and make breakfast for everyone. Layfon would help out at Father's dojo and I'd walk around in a suit......A small dream of the future. Just before I wake up, I'd see Layfon leaving, wearing the white and silver uniform of a Heaven's Blade successor. It makes me sad.

I liked the Layfon who trained in Military Arts, but not the Layfon who was a Heaven's Blade successor. I'm proud of the heroic Layfon who fought for everyone, but I didn't like Layfon going to such dangerous places alone.

I know I'm spoiled, but my wish for Layfon not to do anything dangerous is real.

I understand a bit more of your situation in Zuellni through your letters. In Grendan, it's hard for us to imagine a threat besides that of filth monsters, but it's possible that we might die from this other threat.

But, please don't do your best. What a headache. I'm not sure how to explain this! I'm rewriting the last part of this letter.

I hope Layfon can come back to Grendan. Yeah, that's what I want to say. It's okay if you don't come back as a Military Artist. Anything's fine. I just want Layfon to come back. Six years is a long time, but if Layfon decides to return, then I'll wait for you.

I'll wait and write to you during this time, though I don't know whether letters can bridge the far distance between us.

"Don't say that. It's managed to come this far," Nina said, but she wasn't sure whether her evaluation was right, as this was her first time being so far away from Zuellni. The bike had stopped in the middle of nowhere.

"At a time like this, we should be returning in victory. You won't ever see this kind of scene in a movie."

"This isn't a movie. It's life. Forget about that; if we don't hurry up, we won't get back before sunset. And we've eaten all the food."

"If that's what you think, why not come and help?"

"You want a patient to work? What a terrible man you are."

Sitting on the spare tire, Sharnid lowered his shoulders and sighed. He was changing the tire. Nina sat on a nearby boulder and watched him work.

Layfon......wasn't moving in the passenger's seat. He was sleeping. He was exhausted......Of course. He had been fighting the filth monster for an entire day. He must have overexerted himself. 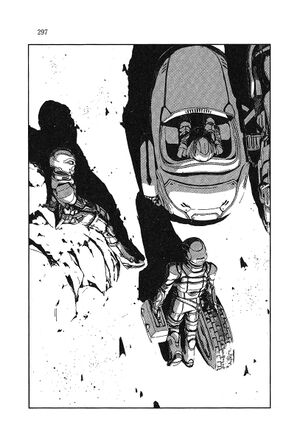 "Yeah," Nina smiled again and looked at Layfon. Both layers of his armor suit were dirty and covered in sand. Who knew what expression he wore while he slept? Nina couldn't tell because of Layfon's helmet. Was he dreaming? If so, what was he dreaming about? About...the sender of that letter? She waved away that thought.

He wanted to solve everything himself. Whether it was the past that Nina had heard of, or the things he encountered in Zuellni. She told him back in the valley to abandon those things, but could Layfon do that? Although he wasn't that old, what she said to abandon dominated a large part of his personality. It wouldn't be that easy to abandon everything. He would do something similar again.

(If that happens, I'll just stop him again.)

Because Nina was his captain......

"I really don't know what to do with him."

She smiled again and realized Sharnid was looking at her.

"Nothing......You really think a lot of him, so maybe the captain likes younger guys."

"How's that possible......" She smiled and shook her head. It must be because she was tired too.

"He's my subordinate and comrade. His position in our relationship won't go higher or lower."

Sharnid shrugged. "No fun at all." He screwed the spare tire in place.

She looked at him and turned her gaze back to the sleeping Layfon, her subordinate and comrade.

The tiny pain she felt when reading the letter......

Nina's words disappeared under her armor-suit without an echo.