When she opened her eyes, something felt strange.

It was the ceiling of her room that she was used to seeing. Every room had the same wallpaper, but the stains on them couldn't be the same. The feeling of the blankets, the atmosphere around her. Yes, this was Leerin's room.

But why was she here? That was the source of her unease.

Something was covering her.

For some reason, Leerin was wearing her pajamas, and Synola was trying to unbutton them.

"Lee-chan's breasts are normal, but there isn't a need to wear this, right? Don't you feel uncomfortable?"

"I said......that is a useless consideration," Leerin sat up. There were only four buttons for these big pajamas, and Leerin's face heated up as two buttons were already unbuttoned to reveal her bra.

"Really......" she said, calming down after buttoning up her pajamas.

She remembered. She went to her father's place yesterday and was attacked by Gahard. But......Everything was messed up in her memory, except she did recall seeing Synola there.

She was afraid of confirming the worst situation from Synola's lips.

Losing strength, she lay back down on the bed. Her eyes burnt from relief. Her words didn't come out properly. Her throat shook as if it had cramps, and Leerin cried with her face in her hands.

Synola hugged her, and like that, Leerin fell back into sleep.

Synola placed Leerin back on the bed once again and left the room.

Leerin didn't hear that at all.

"But there wasn't any other way. I'm sorry."

Listening to Leerin's breathing, Synola closed the door, praying she'd once again meet Leerin on the next weekend. 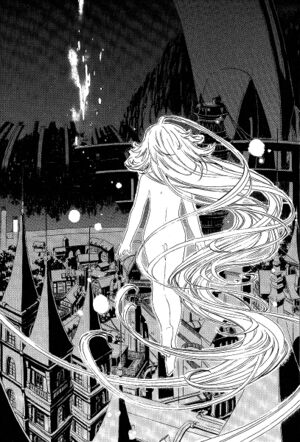 Two cities existed under the same sky. Zuellni and the unknown, ruined city. The ruined city was completely destroyed from the explosion. It sat beside Zuellni like a shadow.

Golden light appeared on the edge of the ruined city. It hovered in the sky, caressing the darkness. Another form appeared in that light, a young girl, naked, with hair longer than she was tall. The city's consciousness.

The name was the same as the city's. No, that was originally the girl's name. This wasn't strange at all.

Used to flying around in the Mechanical Department, Zuellni had now flown outside the city. She watched the sky with wide eyes. A new flash of light appeared below her, and she lowered her gaze to see a golden goat.

The goat shook its head quietly.

What were they talking about......No humans could hear.

And after that short encounter, the goat disappeared.

Zuellni flew in a few circles, then headed back to the Mechanical Department, leaving behind the usual night of an Academy city.