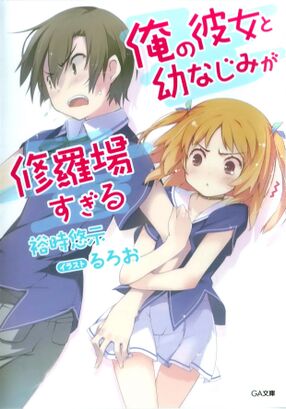 The light-novel series Ore no Kanojo to Osananajimi ga Shuraba Sugiru (俺の彼女と幼なじみが修羅場すぎる short "OreShura", lit. "My Girlfriend and Childhood Friend Fight Too Much") is written by Yuuji Yuuji, illustrated by Ruroo and published by SoftBank Creative under their imprint GA Bunko.

Also two drama CDs have been released by HOBiRECORDS in 2011.

An anime adaption by A-1 Pictures consisting of 13 episodes aired between January 6 and March 31, 2013. It covered the first 4 volumes.


The Ore no Kanojo to Osananajimi ga Shuraba Sugiru series is also available in the following languages:

Kidou Eita enters high school with the aim to attend medical school. Due to his parent's divorce and his intention to maintain his grades, he shuns anything to do with romance or love. One day, the school beauty Natsukawa Masuzu invites him to walk home with her, though he initially refuses. After she continues to do this for several days, he gives in and walks home with her. Masuzu is tired of constantly getting confessed to by boys, so she suggests that she and Eita become a fake couple. Although Eita tries to refuse, Masuzu blackmails him into becoming her boyfriend in name only. News spreads fast within the school of the new couple and Eita's childhood friend, Harusaki Chiwa, begins to confront Masuzu for Eita's affections.

All updates can be found here.